Nessa's lips would curl into a smile at his flattery, watching which flushed cheeks as he teased her robe open once more. The teasing was enough to insult a repeat of urges from earlier, although she managed to resist it...barely. As she managed to distract him with her question, she beamed as he agreed to take her, already excited for the date with him. She bit her lip as he informed of her the condition, unable to resist the urge to admire his undressed body. She took a steady breath, hesitating for a moment, before giving in to her own want. Reaching over she ran the tips of her fingers over his chest, a playful smile on her lips. "I think... I can manage that." She replied, the hint of a suggestion at her words. Her first experience with him already opening up her curiosity over what else was to come. Such tantalizing sensations yet to be discovered at his hand.

As he questioned where the food was, she sat up slightly. "I don't know, It should be any minute no-" She would hear the distant knock telling her that someone was there. She wiggled her eyebrows at Markus, "Speak of the devil~" She remarked airily, pushing herself up an of the bed. Fixing her robe again as she left his bedroom, making her way toward the front door. Idly thinking about what yummy dishes she was sure to be sampling any minute now. She opened the door to reveal a man standing there. He was younger than Nessa but not by much, with messy blonde hair and a jittery hazel gaze. He was dressed plainly, with not a bag of food in sight. "Nessa Lux?" He would ask quietly. She frowned, confused as she answered. It wasn't that she had been secretive about her trip to Dies Irae to visit her boyfriend, but she wondered who would go out of their wait to ensure she received correspondence here. Especially seeing as this was technically her time off. "Yes?"

He reached into his jacket, pulling out a brown envelope, he handed it to her. Hand trembling, he handed it to her, as her fingers clasped around the letter. The man in the doorway would vanish, teleporting before her without a trace. She blinked a few times, thrown by the strange encounter. She ventured from the door, thumbing the sealed edge open to pull out the contents inside. She expected paper, but the material she felt was firmer, glossier. She realised that it was a thick wad of photographs and as she eyed the images they displayed she would release a loud shriek of horror. Dropping the photos all over the floor, kneeling down to check they were real, tears flooding to her eyes. There were pictures of her, moments from her life from the past year. Some at the guild, some on jobs, even pictures of her and Markus. Her eyes were scratched out angrily with a pen, and words were drawn across the images in a thick red substance with a distinctly familiar copper smell. The words told her exactly who it was, across each image in blood were words of hate directed at her; Slut, Liar, Whore.

She knelt there sobbing, weakly she called for the one person she needed to comfort her, "M-Markus." 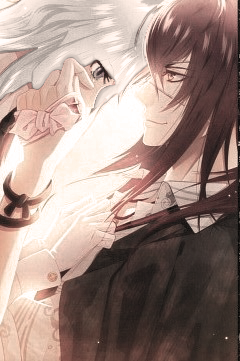 Markus would watch the white-haired woman would look upon him. His eyes would watch hers, his heart picking up, and his breath catching in his throat. There was something abou the way she bit her lip, the sidelong looks she gave when thinking, the uncertainty within her visage, that was so appealing to the chaos mage. He had wondered it before, trying to pinpoint what she had that drew him out so completely. However, he had come to realize it was a fruitless search, whether it be her Innocence, her Beauty, her Conviction, or something else entirely it all played its part in painting the picture of the woman he had come to adore.

As her hands traced his chest, he would take a deep breath, listening to her words. For a brief moment he would wonder just what sort of interactions they would have when Nessa actually let go. As his mind began to wonder and he spoke he would turn, it seemed his question was timed almost too perfectly. The chaos mage would take a deep whiff of the air, raising an eyebrow slightly. He did not recognize the human at his door, and certainly did not smell anything that resembled a food he would recognize. Prehaps meat… he thought he smelt the iron like substance. Though his mind questioned briefly he would listen, his senses picking up Nessa’s name. He started to stand, looking towards the door. He was just out of sight of the man, though could sense him still until suddenly he disappeared. His smell, sounds, all gone in a flash.

The Chaos mage would watch as Nessa closed his door, and opened whatever she was given. It was certainly not food. A parcel of some kind, maybe from her father?... though Markus doubted it. It was as he heard a sudden horrible sound that the chaos mage burst into action. Hearing Nessa shriek had sent him into overdrive. With a flash his magic would activate and he would close the distance between him and the Starlight Maiden instantaneously with but a flash of shadow.

He was already next to her when he heard he speak his name. His eyes looking down, not at her kneeling on the ground, but at the items on the floor. His eyes would be black, darker than the woman would have probably ever seen. True hatred danced in his irises, and purple sparks of chaotic energy would dance. Without even realizing it Markus’ power would leak, a wave of dark magic pulling at his feet. Though it would have no effect on the Starlight Maiden other than feeling dark, cold, distant, the shadow would wilt the pictures within range, the few images it touched would become decrepid, and corrupt, blackening with a dark and chaotic energy.

“Who would dare.” Markus’ voice would speak out. Cold, distant, layed. He was angry, his fist clenched. As he stepped forward his eyes would glance up. A flash of void magic would shoot forward, the door which was closed would vanish with a resounding crack he splintering of what little wood remained would hit the opposing wall of the hallway. As Markus stepped outside his eyes would glance both directions. His magical senses would expand, searching for the man that had delivered the parcel, finding nothing. For but a brief moment the chaos mage would lock eyes with someone who was about to turn down the hallway.

Whether it was because they could sense Markus’ magic, or see the pure hatred in his eyes, the chaos mage would watch as they adverted their gaze and quickly turned down a nearby hallway apparently deciding to take a different route to their direction.

Turning back into the room Markus would look towards Nessa and place a hand upon her shoulder. This. Emotion. It was not for him. Not something he knew he could do. Punishment however. That… that he could do.

“Who…” he would ask her. “who would do this?” his voice was calming as he reined in his magic. The void-like embers of destruction would vanish, and his eyes would clear before he realized there was something more important to ask.

Nessa eyed the photos beneath her, crestfallen as an understanding sunk in. As much as she had hoped that thing had been a fleeting concern, it would seem that it was by no means other. That he had no intentions of leaving her alone, especially not to allow her the chance of happiness. This had to be why he was back, he could see it, that the Starlight Maiden had found a family at Fairy Tail, a bond he could not tarnish. And then, Markus, her love, a man she was devoting herself to in ways she never could for Rex. She had angered him, and he wasn't going to let it rest. She looked up at Markus who had appeared by her side quickly, seeing his quick rage as he stared down at the contents of the envelope. She looked back down, steady tears flowing down her cheeks. There was no avoiding it now, Rex had done this on purpose, had he realised she hadn't told anyone about the incident? This situation had escalated far more than she had anticipated and Rex was pretty much more resourceful than she'd realised. she'd underestimated him in every way; his means, his hatred and his determination.

As Markus's hand touched her shoulder, she reached up touching his fingers with her own. Her neck leaning into the gentle comfort his touch provided, she sighed, before letting go once more. One by one, she would collect the photographs spread across the floor. Climbing to her feet, she moved away from Markus, sitting herself down. She gave herself a moments pause to gather herself, before tilting her neck to look at him. Her violet irises a hollow picture of pain and regret.  "Markus," She began softly, "There's something I need to tell you. She looked down at the images before lowering them down onto the coffee table. Staring at them as she continued,

"Back when we met up at the Fairy Tail guildhall, the day Seri brought Mythal back to us after he'd gone missing. I told you that I was dealing with issues that reminded me of my past, the reminder of which was causing me to regress." She pulled the robe tighter over herself, her hands gripping her elbows as she looked at him. She had gained all of her the weight she'd lost back by now, but it still didn't mean she wasn't entirely self-conscious about her shameful behaviour. "What I didn't tell you was of the incident that was the main trigger of my relapse. You see, after our photoshoot at Lord Szutaris manor. When we... when I told you how I felt and we had those ....perfect few days with just ourselves. I return home to find a message in my bedroom, sat on my bed. It was a cat..."

Her voice trembled as she recalled the scene, "A stuffed grey cat, an eeriely accurate replica of Sebastion, so similar that for a moment I thought it was him. Which is why you can imagine my horror when the stuffed animal was covered in blood. It was a message for me. A warning, that my family we're no longer safe in our own home. I tried to fix it myself, I put protection charms on the house, so powerful that if anyone with harmful intent tried to enter they wouldn't be able to pass the threshold. And that if they did somehow breakthrough, I would immediately know and be teleported there. To be extra safe, I even began to look for a new home. Hoping that by creating a little distance from my family would lure the threat away. I hadn't heard anything from him since, and as months passed I just assumed he had given up." Nessa reached up to brush the tears from her cheeks, trying to compose herself as she confirmed her realisation to the man. Her genuine fear reflected in the woman's tone;

"But I was wrong Markus, Rex is coming after me. And he's very, very angry."