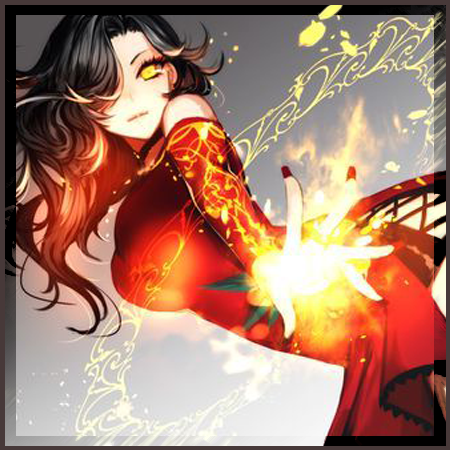 Trinity
I became insane, with long intervals of horrible sanity.
Well, this was certainly going to be new territory for her.

Not the illegal pit fighting, of course. That was a scene she was intimately familiar with, so to speak. Truth be told, it was like this job had been made for her. No, it was the rescuing thing that was new. Typically she was used to killing or torturing people, not saving them. Still, a job was a job and she had made a commitment to Janet. The guildmaster had quite the vision for the future, one that the Avatar of Ataxia was quite curious to see how it would play out. If that vision required her to play the part of the hero for a job, then so be it. She was sure she would find a way to make the experience exciting.

Thana basked in the heat of the sun where she stood on the deck of the ship that had taken them across the thin strip of sea that separated Sin from Desierto. She was dressed for the hot weather in a short skirted red dress whose sleeves hung off her shoulders, and a pair of black heels. Her long raven colored hair hung loose behind her back. Salt water tickled her nose pleasantly, and she breathed the scent of it in deep before letting out a satisfied little hum.

“This is actually insane. You do fucking realize that, right?” As usual, Aeron was not happy with her. In fact, this time the brunette was utterly infuriated. She was pacing the deck behind Thana like a cornered animal, her eyes jumping wildly at every little movement, every tiny creak in the ship as it sailed toward the oncoming shore. Aeron was practically screaming at Thana, despite her whispered tone. “We’re going to get caught! We’re going to be dragged back to Bellum and--”

“Relax, darling,” Thana cooed in a calm voice, drawing the wary stares of a number of other people on deck. It wasn’t their fault, of course. They couldn’t see Aeron. After all, Aeron and Thana were two thirds of a whole that made up the woman of Trinity. Only one of them possessed control of Trinity’s body at a time, but that didn’t stop Aeron and Thana from interacting with one another quite often. The problem was that Aeron was currently little more than a figment of Thana’s imagination, which meant that to those around her she was quite literally talking to no one.

As one would usually assume, telling someone to relax usually had the opposite effect. Aeron’s face turned even more red with anger. “No, don’t you dare tell me to relax! First you get the Rune Knights and Dies Irae hunting for us, then you go and sign us up for some guild. Now you’re taking us right back to the exact life that we barely escaped not even two years ago, and you expect me to relax?!” Aeron was nearly shrieking by the time she was done.

Amber colored eyes that seemed to flicker like a burning fire turned toward the other woman with an amused glint. “It’s going to be exciting, don’t you think? Maybe we’ll get to fight again, just like old times.”

“Of course I am. That doesn’t mean I’ve ever led you astray.”

“But you have lead me astray.”

Electing not to reply to that particular comment, Thana walked away to go find her other companion for the day while Aeron continued to growl her frustrations behind her. For this job she had elected to take another member of Elysium with her. After all, if she was to be Janet’s right hand Ace of Destruction, it was ideal that she should get to know her new guildmates. She had seen the young man by the name of Odhran at the first official gathering for the guild, but hadn’t really gotten to interact with him too much. Still, he had fascinated her with his claim to be a celestial god of some sort, who seemed to enjoy keeping an entourage of summoned spirits about him. He seemed like the type of person that would find a way to keep things interesting, so she was quite looking forward to seeing how he performed in the field today.

Re: Ring of Blood

One of the prime tenants of Elysium was the familial bond that the guild members were to share, and it would be remiss of Odhran to not know everyone that was in his family. Sure, back in Seven, the only family member he knew were his parents, who got executed for alleged crimes against humanity, and while roaming Fiore, he got a letter from an uncle in Bellum asking for fifteen million jewels to help claim the throne of a far away island, to which Odhran would be repaid twenty million, but those aside, he knew no family. That was besides the point, however. Several of the taverns he had visited had mentioned stuff about "guilds being families" or some nonsense like that, so Odhran ran along with the idea. He now had his family in Elysium, and his family of Spirits, who even at this moment-

"Saaaay, you're, uh...Thana, right?" Scorpio was already cooing at the ace. "I know killing slavers is kiiinda boring and cliche, but it's for the good of them slaves, right? Ah, don't worry, I don't kill all slavers. I won't kill you, 'cuz you've already enslaved my heart."

Arnaluuk poked Scorpio's ribcage with her trident, if Scorpio even had a ribcage. "I think you should stop flirting with every woman you meet."

Sweetie made a "squee" sound, spinning to wrap her arms around both Scorpio's and Arnaluuk's necks. "You guys get along sooooooo well! Like, I can already picture it! Dazzling, lit up crystals, providing a nice, cool mist on the artificial sands! A nice array of different colors of shaved ice! Arnaluuk's dress! It's a dazzling white, with little bluish crystals that bounce eeeevery inch of sunlight off of them! Scorpio's tux! A nice-"

Arnaluuk, at realizing Sweetie's implication, quickly shooed herself away. "Listen, Sweetie. Why would you ever think I would care about, let alone marry any of the dunces that we keep travelling with!"

"Well, it's because you are like a Tenerina Cake, Arnaluuk!" Sir Pudley posited. "You have the crunchy, harsh outside of someone that doesn't care, yet upon breaking that layer you have a creamy inside that cares about all of us!"

"I would have to agree with Sir Pudley, dearest Arnaluuk!" Odhran barked. "You and your creamy inside-"

Arnaluuk fired a spear of ice at both Odhran and Sir Pudley. "Please never use the phrase 'creamy inside' ever again. Not just when referring to me. Ever."

Arnaluuk marched over to Thana, who she prayed was more competent than any of the other Spirits or Odhran, which was not a high bar to clear. "If you haven't noticed, the dunce isn't going to settle with just him getting in with that ticket. He's good in a fight for sure, but he doesn't want to 'leave us out of the fun,' or whatever. I was thinking, since this is a slave fighting ring, we could...perhaps have someone act as a slave owner for the rest of us to act as slaves going in for the fight pits? It's your call in the end, but please, whatever you do, don't make the dunce the 'slave owner.' He'd flip out about that. 'They aren't slaves, they're my loyal allies,' that kind of thing. Plus it would be too amusing to see him in fetters." She turned to see her Keybearer, who was inexplicably balancing on top of Lupa's head. He was just...standing. On the Pterolykos's head. Scorpio was standing near Lupa's hindquarters, which perhaps explained a little more. Sweetie and Sir Pudley seemed to at least enjoy the "festivities." Arnaluuk sighed. "If you want to go in fighting, I'm fine with that, but stealth is a...less than ideal option for the dunce."

Re: Ring of Blood

Trinity
I became insane, with long intervals of horrible sanity.
Odhran’s spirits truly were a delightful bunch. They were animated and unpredictable, all qualities that Thana thoroughly enjoyed. She hadn’t quite caught on to all their names yet, but there were very few names that Thana ever chose to recollect.

Once she approached the group, one of the male spirits immediately began to chat her up. Thana eyed the purple haired individual with a curious expression that grew into a teasing grin as he flirted with her, turning to give him her full attention. “Well, aren’t you quite the gentleman…” she told him, giving him a shameless look over. She didn’t get the chance to say much of anything else before a few of the other spirits chimed in, and soon enough Thana was giggling at the sight of all the spirits bickering with one another about creamy insides.

The woman that the others referred to as Arnaluuk approached her and explained that convincing Odhran to go in without the rest of them was probably a no go. However, she did offer a rather enticing alternative. Thana listened with interest as the other woman suggested that perhaps everyone be offered up as slaves for the fight in order to secure passage, with the caveat that Odhran himself not be the one to act as the slave owner as he was liable to blow their cover. Apparently, the mage insisted on treating his spirits with respect, and refused to even pretend otherwise.

“Hmm…” Thana thought to herself, tapping a finger against her cheek. “I do like the idea of posing as slaves. It’s definitely a sure fire way to get in. Events like these usually accept last minute submissions as long as the slave owner seems legit.” To emphasize what she meant by that, she lifted a hand and rubbed her fingers together to emulate the gesture of rubbing coins against one another. Money was always the biggest factor in this industry, and that was easy enough to handle.

No, it was maintaining the story that would be the difficult part here, apparently. Pulling herself away from the wall she’d been leaning against, she slowly paced the circle of spirits and Odhran as she talked. “I could easily play the part of slaver. It’s a role that I… well, we’ll just say that I have exposure to it.” Thana told them in a casual tone. She winked at Scorpio, even being so bold as to draw the tip of one of her nails lightly against the spirit’s chest as she passed by him. “However, the importance of the role is to be convincing, and I highly doubt any of you, or your summoner, would be thrilled with the idea of me having to be a bit… firm handed with any of you.”

There would be no misunderstanding what she was suggesting: that the only way to prove herself as a slaver and them as slaves was to quite literally treat them like slaves. To abuse them physically, not just verbally. A devious little smirk pulled on her lips, and Aeron narrowed her eyes at Thana suspiciously, not at all liking the look on her face.

“So how about this,” she told them all as she continued to walk slowly amongst them. “Odhran can be the slaver with you all as his enforcers… and I’ll be the slave.”

“ABSOLUTELY NOT!” Aeron screamed at her, not that anyone but Thana could hear it. She looked utterly panicked by the very notion, and rightfully so.