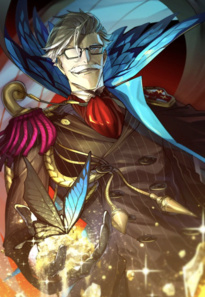 Re: Marriage & 'kindness' for Sweets (Private)

A loud cracking sound, splinters that flew across the room. All was normal on Dahau's day off, which he mostly spent by training and honing his skill. However, with strength such as his, he easily punched through every wooden dummy he had. With a sigh, he looked around the room and saw the mess he created. 'Maybe I really should find a sparring partner next time'

As if his words were actually magic, the door of his room flew open and slammed into the wall next to it. And standing in its opening the silhouette of a fiery woman. 'Alexandra?' he questioned. She looked fierce, wrathful even with her devilish eyes peering from between her red bangs.
Dahau would say more, but before he even had the chance the woman already interrupted him and took him by the hand. Forcefully she dragged him through the hall to the nearest portal. All the while Dahau sheepishly followed her. Sure he could resist, it would probably even work. But seeing as he was being dragged around by a woman whose temper seemed to come from hell itself, he wasn't willing to put it to test. After all, Dahau very much liked his head attached to his body.

The portal took him to town that was known as the flower of Fiore, namely Rose Garden. A peaceful town filled with lushing green. Yet it wasn't the town they were for, nor causing any mischief, much to Dahau's surprise he was dragged along here for an entirely different reason. Being dragged all the way to a warehouse the unlikely pair met a scrawny little man with a thin mustache, with behind him stacked boxes filled with Valentine sweets. 'Wait...' stated Dahau 'You can't mean we are here for-' But before he could finish he was already cut off. Yup they were really here for the chocolates, or at least Alexandra was here for the sweets and he was only being used.

'Fine..' he eventually said after hearing the word marriage 'If it will get you your chocolates, I'll suit up' Dahau had no idea why he went along with her weird scheme, the only thing he did know was that she was dead set on getting those sweets and by now he wasn't planning on standing in between.
The man gestured Dahau to follow him and he got lead into a back room, which housed several mannequins all dressed in proper marital clothing. However, most of them weren't really his taste, from dandy prince's to flamboyantly outrageous as if you were an actual peacock. 'You got to be kidding me' he said angry 'You can't seriously mean that there are people who put on these freakshows. Don't you have anything... sophisticated?.' 'Well, we do have some tailored suits and armors reserved for celebrity mages, but as I said those are aaaaargh'
Dahau's patient had run out as well, he'd cut off the man in the middle of his sentence and grabbed him by the throat as he rammed him into the nearest wall. His smirk gone, instead a face filled with anger as he stared at the man. 'You were saying?' 'I-in the b-b-back' replied the clerk with a shaking voice.

A couple of minutes later, Dahau walked out of the back room. His usual battle attire replaced by a ceremonial armor worthy of a king, truly some fine craftsmanship. With golden coating along the edges and patterns and a side-cape hanging off his right shoulder. 'So? As your significant other, do I meet your expectations?'

Re: Marriage & 'kindness' for Sweets (Private)