How to Have Fun! (Aeluri)

How to Have Fun! (Aeluri) 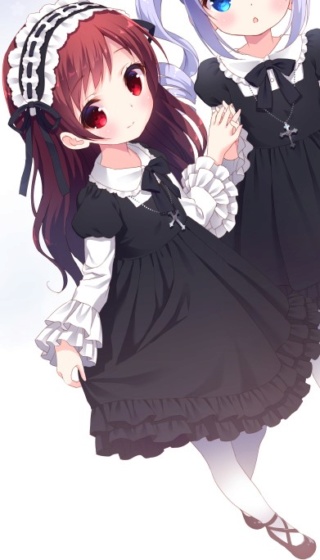 Having come to make a visit in Rose Garden for a time most likely not to exceed a couple of days, the red haired girl had been a bit on the bouncy side. As per a usual type of mood for her since she'd joined Crystal Swan at the least. It had been a while since she was voluntarily part of a guild and mainly thankful that it was that way as well. The last thing she had ever wanted was to deal with anything like Savage Skull again, though with the last mentioning of their hall being left in tattered pieces, it might be more of a blessing than she'd initial thought. Almost as though a huge weight had been lifted from her shoulders. If her mother truly was not in charge anymore, than there was some rime and reason for it, and as such she would believe that she could see her again some day. Whether it actually happen or not was completely up to her, but the demi-dragoness was much more focused about the positives of the day as well we her beliefs that everything would turn out for the best in the end. She knew everything would be alright soon enough, just to square away some things would make her time a little easier.

As the bell of the church struck hard, the exiting of people from the building of prayers and guidance led a smaller teenage girl to slip out on her own just as she'd come. Sure, people asked if her parents were in with her, but a small explanation of being orphaned to the church had brought her to travel to other towns to visit and enjoy meeting others had them thankful for the way she was. They were so used to kids her age being loud and irritating that to see the opposite in some was a blessing. Right down the street had been a Hot Dog cart with a single man standing there, handing out the meals left and right to others that got out before she could. Famished from being in the building for several hours, the small girl ran over and picked herself up one, walking off a moment later with food in hand and a glowing smile.

Madison had rounded the corner, chomping off half of the length in one go. Her hunger sometimes met no bounds when it came to food and to blood, but never the less when she had it, she devoured it with no problem. Within seconds, the food was gone and her cheeks stuffed. Chewing it up until she could swallow it, she'd thrown the wrapper she had under it away and then let out a sigh of relief, patting her stomach and assuring that she had no crumbs on her face. She was a lady about many things, but when she was hungry enough, she was rather ill mannered about it. But now, she had the whole day to do things... so what should that be? It was too early for arcades and all to be open as most children had school, so looking around in a mostly unfamiliar town had left her to bump into someone accidentally. Jumping back a bit, her cheeks flushed pink from the embarrassment of not looking where she was going. "Oh my gosh, I'm so sorry, ma'am!" She said, bowing apologetically to her. It wasn't a hard bump, so it may not have even made the other person move an inch, though she wasn't looking when it happened and dove immediately into apologizing about it.
_____________________________________________________________________________________

Aeluri and her feline companion Umbra strolled the streets of the town called Rose Garden, exploring back alleys, window shopping, and observing the crowds of people. Colors flashed as passersbys hurried around, rushing to various destinations. The constant murmur of conversation was only interrupted by raucous yelling from merchants desperately trying to sell their wares. Large groups were not Aeluri’s favorite thing, so she and the little black cat at her side ducked into cool, silent alleyways whenever they got the chance. Dark, cold, and quiet was much preferred.

The two hadn’t intended to be in this place on such a busy day - or at all really. Quite often the summoner went out into the night only to find herself in a strange place, led by the starlight and a feeling. The night before had been no different. If Rose Garden during the day was an adventure, at night it was a wonderland. Cat and woman had spent many hours gleefully exploring the town shrouded in darkness, causing mischief and mayhem or just enjoying their surroundings. Come morning, however, the light subdued their excitement. Nevertheless, they perused the wondrous town.

Aeluri’s sensitive nose caught the scent of her favorite flavor in the world: cinnamon! “Umbra, do you smell that?” she asked the black feline enthusiastically. Not waiting for an answer, she picked up the fluffy companion and followed her nose. The closer she got, the woman realized the smell of cinnamon was woven in with the scent of pastries. Nearly drooling at the thought, Aeluri was too focused on her sense of smell to notice the girl before her. The impact did not affect the bigger female much, only stopping her in her tracks. Startled slightly, Umbra leapt from Aeluri’s confining arms to her shoulders, warily eyeing the being before them with a long tail flicking behind him. Looking down, the mage’s mismatched eyes caught sight of a teen with crimson red hair bowing and profusely apologizing. The girl was dressed in fairly modest clothes - a black dress with frilly trim and long sleeves. The outfit was cute and fitting. Aeluri gave a quick glance to the people nearby, but nobody was paying attention to them. Not a single person seemed to be accompanying the girl. What was such a young person doing alone in the bustling streets? Did she not have a family? Questions flashed through Aeluri’s mind, but she did not ask any out loud. Instead she just said, “Er… it’s okay. You don’t have to bow, it was an accident!”
Notes: None!
ivyleaf33 of FTRP
_____________________________________________________________________________________
◆ Black Cat Collective ◆

Giving a moments more in time to remained bowing, the person she'd run into had seemed to be female from both the sound of her voice and the fact the girl had been wearing a skirt. As the smaller red headed girl had gotten to her normal upright position, her eyes took their time to glance over the girl from head-to-toe until she reached the face of the person. She had flushed pink cheeks by the time that her face had met the strangers for sure, but that was mostly in awe of how pretty she looked. Madison could never help but admire how nice people looked dressed up, but maybe that was just an orphans thing that they had in their mind. Some get angry because they have what they couldn't while others look in awe and use it to strive to want the same so that should they ever have kids that this doesn't happen to them. After a moment of mindless staring, the young demi-dragoness had snapped out of it and fixated to the cat up on the girls shoulders, smiling. She loved cats! Seeing that this raven haired girl had one whom seemed to enjoy resting on her shoulder only made this accident much more of a blessing than she'd originally thought it to be.

Her hand waved at the comment, as if waving off her dismissal of the accident. "I should have been looking where I was going though. Sometimes my mind trails off and I don't realize it much. But, as long as you're ok, ma'am then it's truly alright!" She giggled, giving her a close-eyed smile before she had clasped one hand in the other in front of her, making her arms form a bit of a V shape. This of course was just a natural position for her, but her formalities were much more old school than need be. "My name is Madison Richter! It's a pleasure to meet you and that cute little kitty on your shoulder!" Her introduction came with it's own curtsy, lasting only a moment before she'd gotten back to her former position. "Oh, and your eyes are so amazing too! Did you heterochromia affects roughly 6 in every 1000 people? Yet it's still so rare to meet someone with it that it makes me a little envious!" She couldn't seem to help herself with the little bit of fact giving about her eyes, though as rude as it may have been in she were the type of person whom disliked the notion of them being brought up.
_____________________________________________________________________________________

The girl was surely intriguing. Such a chipper attitude was much different to the gloom that Aeluri was used to at the Basilisk Fang fortress. Her mannerisms seemed old-fashioned, yet still childlike. With a confirming glance between herself and Umbra, the mage decided to humor the girl for a while. They had nothing better to do anyway. She seemed trustworthy enough, and Aeluri’s guildmark was hidden underneath a cloak of long, black hair. The two were not at risk of their dark identities being discovered. Plus, it wasn’t often she got the chance to be around such a pure-seeming individual.

“I was unaware of the statistics, heterochromia is certainly unique! My heterochromia isn’t naturally occurring, though,” Aeluri said with an abrupt end, not leaving any room for discussion. “My name is Aeluri and this is Umbra. He doesn’t bite, I promise!” The taller female leaned down, putting herself and the feline at eye level to Madi so that she could pet the soft black creature. Umbra grumbled at his friend mentally, but turned to purr at the polite girl, deciding to refrain from speaking as not to spook her. Despite being a scaredy-cat he couldn’t resist a good scratch!