The sweetest of adventures

The sweetest of adventures "The Bird of Paradise always gives the prettiest of views." Desirée told Kiwi as her head could be seen peering through a glass panel of her bedroom, while the flying jet zipped through the sky above the clouds at a rapid rate. Kiwi was sitting upon her bed organizing a small container of makeup from the vanity room, as she began to slip two plastic pony-tail holders onto each of her ponytails, each looking similar yet different at the same time. They were both a brown with a deep hue that resembled chocolate, and each resembled different desserts. One looked to be a truffle of sorts with bumps that resembled powdered sugar on top, while the other had strings of caramel on-top accompanied with a fake half-wrapper which matched the caramel which supported two dessert roses, one red and one black. Desirée was also wearing a beautiful dress to match, which consisted of mostly brown, white, and black chocolaty hues with pearly candies.  She thought that an outfit like this would look rather cute for the mission she was going on, considering they would be going to an entirely different dimension made completely of food! This idea was totally out of the blue for Desirée, considering she had never been to another dimension besides Chrysalis, but it was such a long time ago, and it wasn't extremely different than her normal setting.

Her quest seemed very simple yet also intricate, as she was to venture to the peak of a dessert mountain and retrieve two ice-cream cones for a witch which was unfortunately injured. making the situation to where she would not be able to go and get them herself. Desirée did not understand why she wanted these cones but she did not ask, considering she was not a witch and did not understand what these cones were capable of. After all, everyone has their reasons, therefore she would not judge or interrogate her reasoning behind this desire. This resulted in her embarking in a long but speedy flight to The Wakusei Portals, which she had never encountered or got close to before. However, she did look them up, and apparently each would bring those who wished to another dimension, or planet, very far from Earthland. They were aboard 'The Bird of Paradise,' which was Desirée's own ship which she used for travels and performances. Despite having the flying space-ship for such a long time, she had just began using it for travels, considering the missions she had been taking had changed from easy and close to hard and very far from her current location. She loved this, considering each mission she would be able to travel across the globe and witness new sites she had never seen before. Through this bedroom window she had seen many different places since signing with her first label, which is how she obtained this beautiful ship in the first place.

"We are now approaching the Wakusei Portals, please prepare to descend. I would recommend getting everything you plan on bringing and bring it to the waiting area, as I will be opening the downfall pole hole and letting you ride it down." a voice said over the ship's intercom muting the subtle music being blasted from the megaphones, which appeared to belong to Rachel, the pilot of this ship. Desirée walked over to the contact pad upon her wall and pressed the button to confirm that she would do so, before walking to her bed and grabbing a clutch filled with her necessities and Kiwi. This clutch was shaped like a box of chocolates, which was definitely fitting for the occasion. She then walked into the waiting area and standing there was the pole used to descend, which stretched down extremely far from their height in the sky to the small mass of land below which lead to the portal. The white-haired girl handed Kiwi the clutch and secured her hoop in his tentacles before jumping onto the pole, spinning around and descending in a quick manner.

As she descended and Kiwi rapidly followed behind her, the hazy ground presented another white haired female standing near the portal. 'Who is that?' Desirée thought to herself, but as she got closer and closer to the ground the figure soon blossomed into a clear image of one of her closest guild members. 'Charlotte~!' she thought in her mind, as her black boots which were accompanied with tights met the ground and right next to the girl which was peering into the portal. She looked to be in a trance because of the ripples bouncing off of her hands and staff in the portal's waves, which made for the perfect opportunity to make a grand surprise. 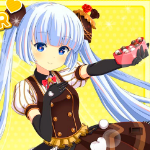 As Desirée seemingly startled her white-haired friend, it had appeared as if she had entered the portal halfway, causing her body to look as though it was chopped directly in half like someone slicing cake to eat. This slightly startled Desirée considering her body could not be seen going out the other side, but rather it was in that dimension. Desirée wondered what that dimension would be like considering the only thing the witch told her was that it was made entirely of food, which made her stomach rumble at the thought. She was slightly worried that what she thought would be a harmless prank had scared her friend extremely, as Charlotte's face appeared to read so. She was out of the portal finally, but looked as if she was still regaining her position as Desirée reached into her clutch and pulled out a small first-aid kit. "Do... do you need a band-aid? I didn't mean to scare you, Charlotte!" the idol would tell her friend and guild mate, as she would make a quick bow in response to her look of shock. "I didn't mean to cause any harm! I don't like to harm by best friends at all..." she would tell Charlotte, as Kiwi watched her begin to analyze Desirée to make sure it was actually her.

Desirée did not even realize she had called Charlotte one of her best friends aloud, something that she did not hold anyone to the title of since Lele, her deceased master. Her thoughts soon faded into darkness, as she began to remember that night in which it all happened. It was like a reoccurring dream while being awake, as these dark and dreary memories always seemed to come around when she would experience moments she had previously experienced while being in Summoner's Stone. It was a rather sad topic to discuss, so she mostly held it back when necessary. However, these dark and saddening thoughts were soon broken by a tight embrace that she had never experienced before from Charlotte, an extremely tight and firm hug. Desirée hugged her back in a very firm style as well, as she enjoyed hugs more than anything in the world. She got a bit of sweetness in her nose, which she assumed came from the side that entered the portal and could have retained a dessert smell. Desirée herself was wearing a perfume which was based off the scent of sugar cookies, therefore her scent may have been contributing to this factor.

"I'm here to go on a mission, I was requested by a witch to retrieve a few items from the realm in this portal." she would tell Charlotte, as she noticed that her eyes were wavering to her ship that was levitating over the portal that they were standing by. "Oh, I have never shown you my ship before! It is called the Bird of Paradise, my custom travel and concert ship. It can turn into a giant stage to perform nearly anywhere, I should give you a tour sometime!" Desirée would exclaim, as it would levitate in the air as the captain was ordered to put it into levitation mode until she came back from her job. She shamelessly adored her idol ship, as it was a place she could use for relaxation as well as a temporary escape from things. Nothing was better than a night upon the sky, while sitting near one of the large window panes with a glass of whiskey and a notepad for her. It was frequently where and how she would write her songs, as she enjoyed the peace and quiet up in the sky.

"Oh my goodness! You are here for The Twin Ice Cream Cones of Meishi? No way, so am I! We can go on the quest together!" Desirée had exclaimed after they had separated from their hug and she spilled the reason she was here, causing the idol and Kiwi to hop up and down in excitement. She thought that it had to be fate, considering put of the thousands upon thousands of mages in Earthland she had ran into one of her greatest friends in her own guild. So happy and in the moment, Desirée seemed to tackle Charlotte in a hug, causing them to waver into the portal and eventually fall through while in an embrace of a hug. Kiwi freaked out and soon zipped through the portal to follow them, meeting them where they soon found themselves in Meishi.

The place was beautiful, as they would find themselves at the bottom of a giant mountain range made entirely of ice cream and desserts! They were currently laying on-top of what appeared to be a giant gummy bear, red in flavor- Desirée's favorite when it came to gummies! The portal which appeared to teleport them to the location they needed to be soon dissipated from the air, making their arrival permanent for now. To return they would have to find another portal, but Desirée did not mind, considering they were one step closer to completing the mission. "I... um... sorry! I didn't mean to!" Desirée would exclaim as her face was a bright pink, her body quickly jumping off of Charlotte's due to the way they had landed. "Please forgive me.." she would say as she brushed chunks of candy off of her clothing that were not meant to be there, reaching her hand towards Charlotte as a means to help her up.
"Lets go get some sweets!"
► kaigra ◄
_____________________________________________________________________________________
✧ on wings tonight, i'll soon set sail ✧