Job: Bully the bully
Rank: D
Player Requirements: D-rank and above.
Job Requirements: Minimum of 5 posts of 150 words per character. Must ensure that the bully is dealt with one way or another.
Job Location: Magnolia
Job Description:  A kid is having problems dealing with bullies at school and has been collecting as much pocket change to pay fr a job. While it is chump change, the job is to scare the bully away so that the kid can have a decent life. He wants the bully to be scared and will get in trouble if the aggressor is found beaten or dead. Although Dark guilds could by all means choose to forgo the monetary reward and go straight to the extreme.
Reward: 100 Jewels or none if the bully gets hurt.

John stepped out of the local Rune Knight office in Magnolia after having turned in a criminal that had a bounty on his head. Alive, of course, since he was worth more alive. Once outside, he pulled a cigar out from one of his pockets and extended the blade built into his left arm slightly to cut off the tip. He retracted it again and flicked his thumb up, igniting the lighter built into the mechanical limb. Holding it up to the cigar, he puffed it a bit to get it burning. Once it was lit, he extinguished his lighter thumb and puffed the cigar a few times, blowing a stream of smoke from between his lips. He started to walk off, not entirely sure where he was going, as he had no destination. He should probably search for more work. He had spent pretty much all of his funds on getting what ware he currently had, and he intended to get more. It was the only thing he could think of to replace the power he'd lost. Damn demons, spirits, gods, ancient ones, whatever the hell it was that wanted him. He managed to strike a deal with one of them, but he had nothing to offer any others that might find him, and as such, he would need to be ready to protect himself, perhaps join a guild that would be willing to do so. He doubted any of the light guilds would have what it took to do so, though. Unfortunate, he would prefer to do things legally, but he may have to step over the bounds, depending on how things play out.

John walked, puffing his cigar in thought when he heard a shout from behind him "Hey! Mister!" It was the voice of a child that called out behind him. He stopped and turned to see a kid, running towards him, small wad of cash in hand. "You look really big and strong, could you do a job for me?"

The man chuckled and pulled the cigar out of his mouth, flicking off the ash as he knelt down in front of the kid. "I'll do a job for anyone, provided it pays." He said. The boy's eyes lit up as he held out the money. "There's this big older kid whose been bullying me, could you get him to stop? Just scare him though, I don't want him hurt or I might get in big trouble." With a grin, John took the money and pat the kid on the head. "Good as done, just point me to 'em." He answered. The boy lead him to a playground and pointed out another kid, this one bigger, and definitely older than John's client. He walked over to the bully, who turned to look at him. The kid was your classic slack-jawed, mouth breathing, idiotic bully.

"Uhh can I help you sir?" He asked. John reached out and gave the kid a shove, not hard, but enough to knock him down, just to show that he wasn't here for chat, and wasn't here to be friendly in the slightest. "Heard you're the bully 'round these parts. Someone gathered up enough dough to teach you a lesson." He said. The kid's eyes grew wide in terror as John spoke and leaned in front of the kid. He inhaled a puff of smoke and blew it out in the kids face, making him sputter and cough. "But I'm a nice guy. I'll give you another chance to get yourself together before I come back to do the job for real. So either play nice, or you'll be wearing an eyepatch like me, capiche?"

The boy just stood there, mouth agape for a few moments while John puffed smoke out of the corner of his mouth. He slowly started to nod. "Good." He said before reaching forward and pushing the kid's lower jaw up, closing his mouth. "And keep your damned mouth closed, you'll catch flies." He straightened up and walked back to his client. "Job's done. If you ever need a merc in the future, I'm sure you'll figure out where to find me eventually. You seem bright enough." He said, walking off to wherever the road may lead, the small trail of scented smoke following behind him as he puffed away on his cigar, occasionally taking it out of his mouth to flick off the ashes. The kid had given him barely anything, but that didn't matter. The job took up about two minutes of his time and earned him dinner for a night. It was rather pathetic, but he'd take it. He'd take anything at this point. As long as the time and risk in the job was worth it for the pay he'd get, it didn't matter what it actually was, he'd do it. He needed to do it.
_____________________________________________________________________________________
Character|Not Magic 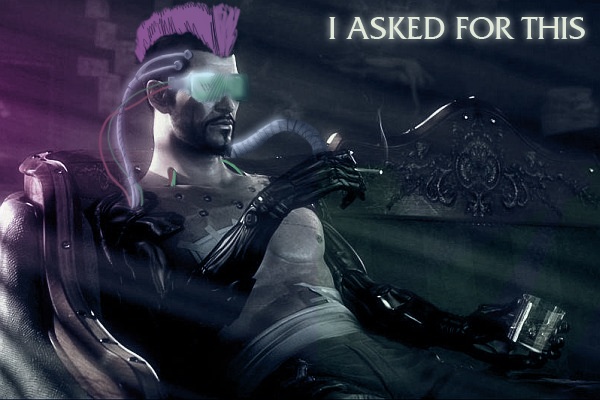