The member 'Kamsa' has done the following action : Dice Rolls

It seemed that the trio were getting nowhere with this pawnshop broker, and in fact had they not interrogated his little street urchin, and controlled him? Maybe they wouldn’t have even worked out that they were up again the man who was taking the jewels to sell them on. But Nao was incredibly sure that the man in front of them (who looks very similar to a Russian fighter from a video game) was the man who was doing this. He definitely didn’t learn from the last time, but he was definitely playing it off that he didn’t know Nao at all.

“I don’t know what you want kids, but there are no jewels here,” he said in his terrible accent, looking around before eyeing up some jewelry. “Besides that old junk there, but there is no way that someone would even want to take such crappy work!”

Nao would look over to the table, just as the man used the chance to make a small signal as if to give his men the warning that their security was being compromised. They would have to gather more people to take on the Spirit Rulers, and the Ocular Mage. Nao would also note that the jewels in the front of the store were definitely poor work, and that upon further inspection it seemed that they were actually made from freeze dry Kool Aid that had been drilled into, and attached with a piece of string.

”You’re certainly right!” he remarked as he looked back, making the man jump slightly ”Your jewelry here is definitely… a unique flavour to the items you seem to sell here huh? So you don’t have any stolen goods then?” This was returned with a typical shake of the head.

”Well…” the mage said, taking a look at Ashe for a moment, before looking back. ” I don’t think anyone in this building believes you. You’re a pretty cruddy liar you know. Maybe we should make it a little easier for your lips to loosen.”

Nao would look around, as the owner started to feel a little concerned about what was going to happen next. He knew this man had some kind of weird eye powers, and a bow and arrow set. But there wasn’t a bow and arrow set with him, and instead he was with a different girl. Where were the blonde haired girl, and the weird pony with the knight? Well it didn’t matter now.

His eyes would begin to change to their colourful hue, and he would frown at the man, before looking around the room to work out what he could do to actually cause some agitation. If they couldn’t get him to talk despite knowing he was the ringleader of all this, maybe they could get him to attack so they had reason to search the place.

”Man…I don’t think any of the items you’re selling here are worth the price, like for instance the jewels you were selling? Yeah they’re completely fake, and you just made them to have some kind of poor stock as a front of what you were doing.” His eyes would activate, and a heat ray would emanate from his eyes, focused on the fake jewellery. In a few seconds everyone would notice begin to melt, and catch fire for a brief moment before settling down.

”Man I bet even those gold coins you have on the table that are meant to be from some ancient civilisation are just chocolate coins.” And it was with that, that Nao would begin to start heating up each and every product on the tables. Items would melt under their cheap plastics, and it would only have been a matter of time that the boss would have had to come out of his fake shell, and actually fight like a real man.

The member 'Nao' has done the following action : Dice Rolls 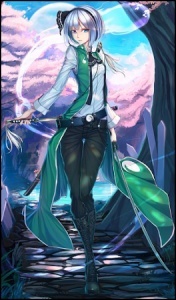 The the two of them were pushing the pawnshop boss' buttons pretty hard, and it was showing. It was just one thing after another: first Nao comes in and mocks both his henchman and his front in an attempt to intimidate him, then Ashe follows suit by drawing a weapon and threatening him if he doesn't comply. Then, to make matters worse, Nao starts melting his fake wares with his heat vision and mocking him even further.

"You know, I wonder how long it will take before he pops." Ashe wondered aloud. She wasn't talking to anyone in particular, she was just aiming to antagonize the man. Surely he would fly off the handle soon. True enough, as soon as she spoke his eye twitched in anger, yet he still managed to contain himself.

If it weren't for the fact that we know he's guilty I would almost feel like we were the bad ones here.

It does seem that way, does it not? If you are having doubts I would suggest taking note of the fact that Nao is proving all his wares to be fakes. And insulting ones at at that.

No, no, that's not it. It's just...I'm not particularly used to this sort of thing. The jobs I've handled before were all pretty straightforward, none of this strong-arming business to try and force his hand so we have an excuse.

I understand. Still, it would be advisable to turn your attention back to the task at hand. He is proving to be a tough nut to crack.

"Just tell him where the jewels are you fucking idiot!"

"WHAT?! ALRIGHT THAT'S IT, GET 'EM BOYS! MAKE SURE YOU GET THAT BITCH OUTSIDE, I WANT HER ALIVE SO I CAN TEACH HER A LESSON!"

I amend my statement.

The burly shop owner had abandoned all trace of his calm facade and was simply yelling at the top of his lungs now. It seemed that he still held quite a bit of a grudge toward Ana, which was unsurprising considering that this would be the second time she'd have made him look like a fool. In his rage he lifted the entire display case straight over his head and threw it at Nao and Ashe, screaming "NOBODY FUCKS WITH SMIRNOFF!"

Ashe simply turned ethereal to avoid it, but forgot to take into account whether or not Nao would be capable of dodging. Regardless, once the display case flew past she'd unleash a wave of spirit energy, flinging the crowd of hoodlums against the walls.

Getting the boss of the place furious was beginning to take some time, and at least half the goods were now melted piles of goo. The look on the man’s face seemed stern, but he knew… Oh Nao knew this man was pissed off with what was going down right now. He didn’t show it in his face, but oh he was definitely angry with the group for destroying all the goods that he was selling.

I wonder how long it will take to actually get him to talk… hopefully not until I end up burning this whole damn place to the grou- And then he heard Ana call out about just getting him to tell the group where the jewels were. And that was when he finally snapped into his rage. So it was only through the call of the girl that ruined his shop last time? It was all that simple? Well then…

Nao would turn his head to hear the rage from the man, smiling before seeing a giant display case come right at him. It would hit him square in the chest, and as he went flying off out of the shop near Ana, he would fire his heat beam towards the man over and over again to cause burns to the torso. It would hopefully mean that the man would get it that they were here and meant business.

As Nao eventually landed on his back, he scraped against the group next to Ana. He would turn his head to see that his bass cannon had almost charged, and he would just make a sheepish point towards where he just was.

”He’s right there if you want to fire it at him, the rest of enemies are also pretty weak too. I’m just gonna lie here for a moment or two…” And with that, he would just rest his head on the cold, hard concrete. At least he did his job for now.

No sooner had the display case blown past her and out the door-taking Nao with it-than Ana shouted for the two of them to get down. There was of course little need for Ashe to do so however, as the incoming Bass Cannon shot would pass through her ethereal form harmlessly. On the other hand, the same could not be said for the other inhabitants of the shop. Smirnoff himself was the only one capable of withstanding the sonic roar, merely being blasted into the sky while the rest of the punks literally exploded into a pink mist.

Ashe blinked slowly, taking in the carnage. If she hadn't seen them all just seconds before she could have swore that no-one had been there in the first place, such was the utter devastation of the Bass Cannon. No blood, no bone, no trace at all remained of their corpses. The only testimonial to their existence was the fresh coat of organic paint covering every available surface.

When the last of the mist had settled Ashe let go of her ethereal form, just in time to catch a small bag full of jewels as they fell from the sky.