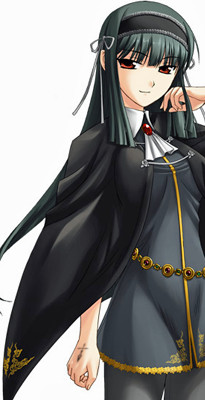 The Job seemed simple enough to have as her first mission. Protect a sweet old woman from an assassination. The only catch was to keep it hidden from her. This was understandable, as just knowing that someone wants you dead could ruin your life.  So for the past two days, The Goddess had been giving Miss Cooper her divine protection from afar. Her magic was well atuned for such trivial matters. Dressed in her Dies Irae Uniform, a red plaid pleated mini skirt. White thigh high stockings with red lines at the top and along the side of the right leg, the left leg extending up under her skirt. Red High heels adorned her feet. The red and white jacket covered her black sphghetti strap undershirt. The high collar and filligree definitly helped her feel at ease moving from her Noble home to a more Militarized and Spartan life style.

Sitting on a rooftop, keeping and eyes on Miss Cooper, she folded her legs as if she was sitting on a throne instead of ceramic tile. She found out just yesterday that this wasn't going to be a solo job. Apparently someone from the Rune Knights accepted the job at the same time as her. The Rune Knights were know as the most Lawful Guild. Dies Irae, were there to eradicate Evil. On surface value they might seem like they would mesh perfectly well. But well...

Stepping along the garden, Jin Suzuka approached the hopeless old woman as she was continuing to water her plants in her garden. He wasn't wearing his normal Rune Knight attire since that would give away his mission from the get-go, and instead just kept his pendant with him, hidden under the clothes he wore. Today instead of his uniform he was wearing the attire of the priests at his family's hometown, the long black cloak / robe with subtle pants and a shirt underneath, with sandals. He was giving the appearance of a normal priest who was coming to help the old woman with her garden, while keeping an eye out for the assassin who was threatening her life. Of course he didn't want to give this away, so he pretended to be a normal, kind priest.

"So, Miss Cooper. You won a flower contest recently?"

Janine's eyes had been cast upon the preist in the yard helping her out. Undoubtly the other mage. His aura was immense. A future goal of hers to surpass. Resting her chin on her fist and elbow on her knee, she instead moved her attention on the smaller magical signature. It was about the range of her own. But if she had sensed the size of the other mage's, undoubtedly he would have as well. So an assassination with such a big wall would be to take the coward's way. From a distance with opportunity to escape.

As she surveyed the landscape, she noticed the houses were pretty much lined up. Windows were on street level. and they all had thier front doors facing the street shared with Miss Cooper. All except for...She glanced down over the edge of the roof on the street side. There she had spotted a staff pointing out the window, lined up with Miss Cooper's house. Oh this would be interesting. Seems like the perp was literally right under her nose and waiting for the perfect shot. The priest just happened to be ruining it at the moment.

Time to take some action and bullshit her way to success. Standing up from her seat, she bent forwad at the hips and grabbed the forner of the roof. She moved herself into a hand stand, Long black hair draping on the spanish tile. WIth her legs pointed straight up like an arrow, she turned so her face was towards the street. After seperating her feet, she let herself tilt forward and, by holding onto the fixed edge, swung herself down to wrap her feet behind the mage's neck. Hands released and suddenly she was a heavy necklace pulling him forward, her momentum yanking him from the staff and window down to the street below with a hard thud. She managed to grab the door trim and slow her descent so she didn't injure her own knees in the process.

Once on the ground she turned around sharply. "MAXWELL! You Cheating Bastard? You just proposed to me and now I hear you've been sleeping with Roxanne?" Tears started welling in her eyes as she marched right to her 'trecherous lover.' "How could you be so cruel to my heart? What about the baby?!" Her entire goal at this point was to make as big of a dramatic scene. Sure he wasn't hidden from Miss Cooper, but rather instead of being an Assassin, he was going to be an exciting story for the local quilting club. And depending on the actions of the priest, a stain that will be washed away with the tides.

Noticing the two fighting, the Rune Knight stood up from his position of watering plants and simply went over to the elderly woman, and returned the water can. Kneeling down to her level, he closed his eyes and placed his hands together, and said a prayer from his temple at home for her, and thanked her for the time.

"Thank you for spending time with a simple priest such as myself. Watering plants and helping the elderly is all I do these days, and you've simply given me more to do. So thank you."

He nodded his head and bid the elderly woman farewell, then began to tread over to the two who appeared to be a couple fighting on the street. The dark mage looked completely pissed off, but not because of the woman before him. But because he missed the chance to fire the perfect shot, right as that stupid priest was... heading... right... over...

The gaze of the man went from the woman to the Rune Knight that was now only a few feet away from him, and Jin - who had affirmed that Ms. Cooper was no longer looking their way - grabbed the man by the arm, twisted it behind his back, and shoved him to the ground with his arm held up. It was a painless hold, but if he moved in the slightest, his arm would be broken. And as much as Jin knew, the dark mage most certainly knew.

"Those who commit adultery are sinners who face an afterlife of torment."

He said, reciting the lessons he memorized from the years he spent as a young priest-in-training back at his home. His entire family were of priests, so when they found out that Jin wanted to be a Rune Knight well... they took it a little less than oddly.

Tearing off the man's sleeve, he saw the tattoo of the dark guild on his arm, and knew that it was easily the assassin that they were looking for. Revealing the pendant from beneath his cloak, he said quietly into the man's ears that he was under arrest, then took from within his cloak a pair of magic-reducing handcuffs, and put them on the man. It was an easy arrest, but mainly because of the shock factor that came with the B rank mage approaching the two D ranks.

"Your work is much appreciated."