Today was a special day for Quill, today is dragon flare day. Dragon flare is a holiday where the dragons of Quill's homeland of "Drachma", set off a firework-like display. Lucky for Quill, Paradise also goes though this and it is identical to the one in Drachma, he wanted to share this with his new family/guild in this most beautiful event that happens once a year. Unlike normal fireworks, dragon flares have some beautiful shapes and colors that even the oldest elder still find beauty in and are surprised at it each time. So Quill set out a flier on the main post board in the guild saying:

"TO ALL GUILD MEMBERS OF SILVER WOLF. I, QUILL SCORCHWOOD, WILL BE THROWING A NOBLEMEN'S BALL TONIGHT IN HONOR OF DRAGON FLARE, A HOLIDAY THAT I HOLD DEAR TO ME. DRESS CODE IS AS FOLLOWED: FANCY SUIT/DRESS OR CLOTHING FROM YOUR HOMELAND, DRESS GLOVES(OPTIONAL), NO MASKS OR COMBAT ARMOR, AND NO WEAPONS UNLESS YOU SERVED IN A MILITARY. YOU MAY BRING ONE NON SILVER WOLF MEMBER AS A GUESS, YOU MUST ALSO EXPLAIN PARADISE'S RULES TO THEM BEFORE HAND. YOU DO NOT HAVE TO BRING ANY FOOD OR DRINKS ALL WILL BE PROVIDED ALREADY, FINALLY IF YOU DO NOT HAVE ANY OF THE REQUIREMENTS THEN PLEASE SEE ME ASAP."

Leona woke up and sat on the edge of her bed. She was a newly minted member of Silver Wolf. The blue guild tattoo was on her right shoulder, identifying her as a member of Silver Wolf to one and all. The upstart guild might have enemies, but she was ready to fight any enemies who presented themselves. Instead of fighting alone, the blonde would have a guild for support.

Trying to change up her outfit a little, she put on an olive green t-shirt and khaki cargo shorts with her usual boots. She put on her backpack and made sure to pack her canteen of water. Some habits were hard to break. She strode into the guild hall and noticed a flier. It was from Quill Scorchwood, one of the people she had met recently.

Leona read the flier. There was a fireworks festival? And food was provided? Interesting. She recoiled when she read the requirement for a fancy dress from her homeland.

There was not much time for fancy dresses in Desierto. She was forced to leave with nothing except the travel clothes in her backpack and on her body. None of it was suitable for a formal gathering. Fortunately there was a way out... anyone lacking any of the required items could see Quill about it.

As luck would have it, Quill was standing nearby. Leona approached him.

"Hi Quill. I read about the dress requirement. Unfortunately I don't have a dress that's good for a party. Is there anything you can do about it?" Leona asked Quill.
Yuvon

”Nothing tops this outfit…” he convinced himself as he sat his eyes upon the flier with an immediate reply that was ‘yes, I will attend the Dragon Flare celebration’. His outfit fitted the requirements; from his homeland, fancy, dress gloves, no weapons, boom… but no man on Earthland could convince him to take off his mask - no man, that was. No man… absolutely no man in Earthland… no man at all…

Turning his curious gaze towards Quill, the librarian smiled under his mask. “Such pride and cultural richness can only be expressed through this uncannily fancy suit,” he expressed. The suit was more or less a normal suit in a dark-grey-green color along with a fur coat over his shoulders and a headband of flowers… why did he wear a headband made of flowers, you’d ask? It was cultural.

Quill heard Leo say something about the dress code he then said,"Okay, lets get you to Kanojo and she can make you a dress of your choice." Quill then took her to Kanojo who was a Jorōgumo that doesn't eat people and makes really beautiful clothing, he then went to his home where the party is being held and saw Yuvon already there before the party has even started."Hello Yuvon, nice outfit, you can keep the mask on because i know how much you hate talking it off. Anyway, you are really early and i haven't even gotten into my uniform yet but you are more then welcome to come inside and wait while everything is set up." With that, Quill goes into his room to get into his old military outfit.
He was once called the berserking Dragon for his general berserker nature and dragon like wrath, his military rank was Royal Dragon Guard which is the second highest combat rank in Drachma's military. He then went back to Yuvon to ask him some questions about his home land and what was its primary focus in terms of country norms. 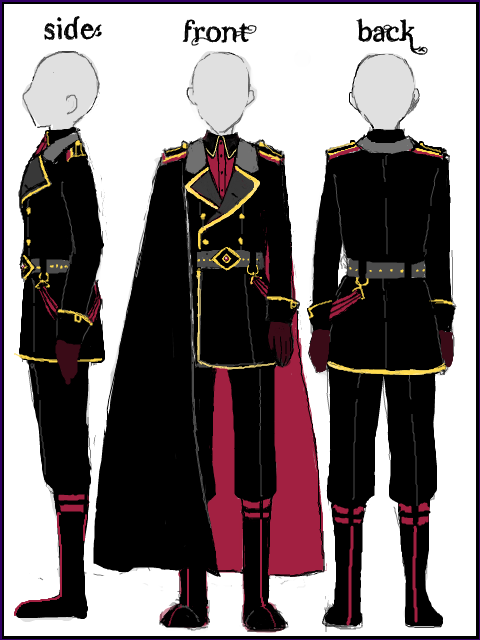 "So Kanojo's the one to see about a dress, huh?" Leona asked Quill. She forgot the last time she had been to a formal function. Growing up in a desert village with all the attendant responsibilities left little time for parties.

"OK, we'll go see her whenever you're ready, Quill." Leona said to him. She was trying to think of a color that was not white, tan, or neutral. Maybe black. She recalled learning from her mother that city women often wore black to formal events.

"How would a black dress be? Would it be inappropriate?" Leona inquired.
Yuvon

"Hmpf, I thought so," the librarian sighed, relieved that he could keep his mask on. Special treatment, don't you say? Anyways, he appeared to have arrived earlier than the party had even begun, so with Quill's permission, Yuvon entered the gate to Paradise where he would wait... mainly by taking strolls around the biome, breathing in the refreshing air, feeling the flowers atop his head sway in the nice wind.

After spending some time with Kanako, Leona came out wearing a gorgeous black dress with matching black high-heeled shoes. It felt strange to be wearing something so elegant. She was used to wearing simpler attire. What if she stained it at the party? It would be a shame to stain something so beautiful.

"I like it a lot. Thanks Kanako!" Leona thanked Quill's companion. It was a nice-looking dress that covered everything. That was what she wanted most out of the dress.

Leona felt like she was about to fall on her face with the high heels on. Hopefully she could remain on her feet. She walked over to Quill and Yuvon. She wanted to know something.

"So... how does the dress look?" Leona asked the pair.