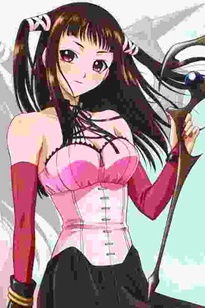 The woman had her long hair half up, with a jeweled sakara hair piece holding it back. She looked like a queen in a high necked coat with fitted arms and a length to her knees. She wore pearly white boots and and pale blue pants. Yona's eyes were lined with black ink and her perfectly pouted lips were colored in a pink shade. Yona walked with a celebratory skip in her step. Despite being in all white, she felt like she deserved a reward for having earned her passport so easily. Yona tucked the passport booklet into her coat and buttoned the inside pocket to be sure it would not fall out.

With her hands undoing her regal coat, deftly flicking the buttons aside and showcasing that she wore only her wraps over her chest below, Yona no longer gave off a regal impression as she strolled into a nightclub. It was late in the afternoon, and few people were in there. She didn't care, wanting only to grab a quick drink or two before catching the next boat back out to Divide Island. The heads in there nevertheless turned to look at her getup, all in white she stood out against the darkened room and the lowlife stragglers in there before even dinner time. Yona grabbed a tall stool and an even taller table with a metallic sheen to it.

Approached by a young barmaid with way too much enthusiasm, Yona ordered herself a pint of warm spiced rum. The green haired woman didn't have to wait very long before some form of entertainment began. A man with a twisted wax mustache took the stage, waving his arms around. "Presenting the terrible terror, the monster undefeated, the magical, the magnificent, the only one to ride the bull longer than a minute and a half-- Marlowww Zekarkov!" Yona closed her eyes and suppressed a groan. When she reopened them the drink she ordered was placed in front of her. Yona took a swig of it and crossed her legs, relaxing back against the table top.

The mustached man went on as a short man with the largest arms Yona had ever seen got up on the stage. It was supposed to be dramatic, but Yona thought the smaller man was ridiculous looking with such large arms. "Practically a neanderthal," She chuckled into her pint. The green haired woman tapped her hands on her ceramic mug and watched as one by one three of the people inside chose to test their luck for "glory and gold" on the magical mechanical bull upon the center stage. She watched the first fall off in less than five seconds. The second fell off after a minute, sweaty and fatigued. And the third was so off balanced that when he was flung off, he crashed into a table and broke it. Yona burst out laughing, unable to contain herself.

"Think you can do better?" Marlow called from the stage, clearly using his "intimidating" voice. Yona inclined her head and finished her drink. She considered it, knowing her guild wanted her to be respectable. But then again, she doubted her guild would be checking up to see if she if she rode a fake bull in a nightclub in Hargeon. Yona stood up flashing a doe-eyed beautiful grin, "Well, you're all big tough men, but it kind of looks like fun. It's not dangerous is it?" She asked, the sound of a whimper creeping into her voice. Yona downed the rest of her pint and left a few coins for the barmaid on the table.

Yona walked up to the stage as Marlow shook his head, "Oh I promise, I'll catch you if you fall. And I'll treat you to a little Marlow-time too." Yona feigned excitement, clapping her hands once and jumping on her heels, "Well all right, what do I get if I win?" The man with the waxen facial hair smiled and a spotlight came upon the green haired beauty. "We have a contestant; for a 2000 jewel reward and the glory of the title, Miss....?" He bent over the stage and Yona called out emphatically, "Yona!" Marlow reached a thick arm down to help her up, and Yona took it, allowing him to help her where she clearly could do it on her own. She pulled her coat off as the ringleader with the microphone whooped and got the handful of clients to pay attention to the upcoming trial.

She placed her folded coat on the stage edge, showing her slim waist and her wrapped chest. She could hear the sigh, the chairs dragged closer, and she thought she might have even heard a whistle. Still feigning to be some damsel, Yona thought, 'why not take advantage of this- free money!' She listened to the rules with a blank expression, hoping to be taken for a fool. And then she climbed on top of the bull. As it began, Yona got her grip with her feet in the stirrups, pinching her knees to hold on. She clung in a silly girlish way to the saddle and said, "O-okay, I am ready!"

With that, the bull jolted into action. Yona clenched her jaw to be sure not to bite her tongue, and then she held on. It was harder than it looked but she was surprised when someone called out, "Thirty seconds!" Applause came out in a small burst, but her ears were ringing. Who the hell did something this dumb for fun? She screamed as if scared and clung tighter as the bull sped up, going to the next level. She bounced precariously in the saddle, but Yona knew how to ride a wild horse and could handle a machine. "1 minute mark!" Shouted a voice. The green haired woman was suddenly moving much more quickly, the bull rocketed and jerked all around, nothing like riding a wild horse. Yona lost her grip on her legs and half her body flew into the air only to collide with the metal body of the "beast".

She cursed loudly and she thought she heard Marlow laughing. As she was flung around, her hands tightened on the saddle and she used the strength in her arms to pull herself back into the seat. Yona felt her mouth go dry and she was gasping. Her legs fell into place and she twisted her ankle into the stirrup. Each time the bull moved, she tried not to cry out in pain. Her ears were really buzzing now and when she finally felt the bull throw her to the ground, Yona lay there for a moment groaning pathetically. The room was eerily silent as the bull stopped and the man with the mustache walked over to her. He bent and grabbed her by the arm, pulling it high into the air even as she lay there on the floor.

"We have a winner! Miss Yona! 1 minute and 53 seconds!" Yona wanted another drink and her whole body felt like jelly. She was annoyed that she took the challenge so lightly because for the rest of the day, the woman knew she would feel like one enormous bruise.