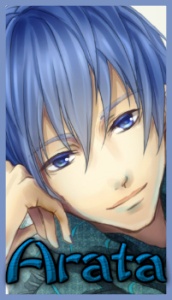 Ohh, whoopee… Another pathetic job that he was being forced to perform. Why should Arata, wielder of the Shackles of the Damned, be forced to tell a little girl that her girlfriend was dead? It was a waste of his time, but it was also not in his best interest to do her, so he decided to carry out the job. There was no way it could take any longer than fifteen minutes, right? Arata sighed as he dragged his feet slowly through Clover Town, the Shackles of the Damned wrapped around his chest, so as to avoid calling attention to himself.

Where was the little girl's damned house? How hard could it possibly be to find the house of a stuck up little girl? Apparently, it could be extremely difficult… Especially for Arata, whose sense of direction was woefully nonexistent… He kicked the floor, cracking the cement sidewalk further, apparently no one cared enough to tend to the sidewalk. Arata shook his head, people disgusted him, so busy with their personal business to do anything for the other people of the world. "Pathetic." He thought to himself with a disgusted shake of his head. As much as he would love to think up all of humanity's flaws on a whim, he had to focus to telling a little girl her goldfish was dead.

After an eternity of glancing around and looking for the girl's address, Arata finally found the house. Took him long enough. It was a two story stone house, it seemed rather large, almost mansion sized, no one could possibly need a house the ridiculous large. Yet another pitiful display of humanity's inexcusable selflessness. He paced towards the house as the chains burned his chest with a light sizzling sound. He bit his lip to keep from screaming, the chains had reopened old wounds, and it was unbearably painful.

His hand shaking slightly, Arata rapped on the house's oaken door, waiting for someone to open the door. A little door opened the door just a crack, "Hello?" She asked meekly, her voice sweeter than any lollipop, in Arata's opinion, then again, his sweet tooth was practically non-existent. "Who are you?" The girl continued, her voice seemed to get meeker as time passed.

"Hey there!" Arata said cheerily, "My name's Arata, and your parents sent me to talk to you about something. Can I come in?" He smiled all the while, putting on this mask was killing him slowly, but he couldn't just massacre a random girl, it was not in his best interests.

The girl nodded slowly and opened the door all the way, a blank expression on her face. She gestured for him to come in, so Arata did so, and almost immediately noticed the fishbowl sitting on a coffee table, right next to a couch. Arata grabbed the bowl and sat on the couch, patting the couch next to him, an indication for the girl to sit down next to him. "What's your name?" He asked with a docile smile.

"Gertie…" She said, coughing soon after she finish.