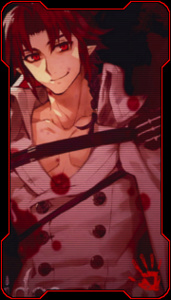 Clover town was a place that was, almost exclusively, upper and middle class. There were not many poor inhabitants of this place, and he was fine with it. The town was very beautiful and it allowed for pleasant strolls through the night; these were even more enjoyable in the morning, just as the sun was rising. Such a splendid sight was one that Vlad was able to enjoy to his fullest, even if he was surrounded by such corruption; somethings simply could not be tainted by the material world; something so pure that it let him completely enjoy it. Nothing would ruin this for him, nothing from this world would stop him. Today he had a very easy job, it was something that was so far beneath him that he could complete this request in a matter of five minutes. He simply had to break the news that a kids goldfish had died. No big deal? Simply tell her, and then make sure she did not cry. Very easy... Right?

Vlad let out a slight sigh, it seemed he was using this disguise again; well, at least it was getting some use... It was better than obtaining it and never using it! So, there was that. He found the place he had to go; it was literally next door to the shit hole he had repaired not even a day ago. "Really..." He sighed, looking around the area. Walking down, he would simply hop the fence, knocking on the door of the entrance to the house. Having been allowed entrance, the parents began to simply thank the man. It seemed they could not handle this task. How sad... He simply smiled at them, and waved them off. It was too simple to have been given such gratitude for this.

"It's no problem." He chuckled, walking to the room in which he was directed to. Opening the door he would peer inside, and laid witness to the small child that was simply playing with her dolls. She was not very interested in the empty bowl, or so it seemed. Knocking on the door he simply let himself in; it was his job to do this anyway. "Well... lets begin like this. When we age we all begin to grow weak, right? Your grandma is not the same as she was long ago; I'm sorry this is going to end horribly... Well, either way... Your fish is dead... Don't worry, I'm sure it is happy where ever it is now. Well, how about playing with your dolls?" Ok, he sucked at this and he knew he did. He had no idea why he had even agreed to this fucking job.

Well, she was not crying, she was simply sitting there. "Okay~?" He patted her head, walking out of the room and saying his goodbyes to the family. That was too simple... Letting out a light sigh, he would simply begin to walk down the road; it was over. Well, what did he have planned next?