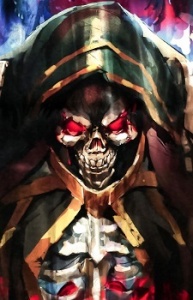 On second thought being dressed the way he was probably wasn't the best way to stay inconspicuous when asking around for information. But it was already too late for that as he stepped out of a dark alley and into the open busy street. Ragnarik was amazed. No one seemed to have noticed him. Everyone just continued on with their merry times, ignoring the strange looking outsider. Even as he walked down the road and with the faint smell of rotting flesh in the air didn't seem to turn any heads. Were these people truly so naive as to trust any stranger? The answer was yes, they weren't just naive but also the most gullible inhabitants on earth. "Pardon me Mam, but I am looking for a certain Mrs. Cooper? could you tell me where I can find her?" he asked an old lady selling fruits with the friendliest voice he could muster; though his friendly voice was still no more than a slightly less creepy smokey whisper. "Oh sure!" answered the lady in a jolly tone "Just go down the road to Aleesi's Toy Store, take a right and head all the way down. It's the last house on the left. Hard to miss with such a beautiful front yard." Ragnarik thanked her hastily for the information, but before he could turn away the lady asked: "Why are you looking for her? Did something happen?" The necromancer was caught off guard, with no excuse on hand. As he struggled to find an answer, a ball of black smoke gathered in his hand.
_____________________________________________________________________________________
Character Description
Magic: Necromancy
Ragnarik

Ragnarik's shoulders slumped as he stood before Mrs. Cooper's house. The place was packed with people and some of them were even town guards. While he contemplated whether it was worth the trouble to just slaughter the lot of them a young man in his twenties approached him. "Hey there stranger! You lookin' for someone?" he asked in a typical friendly, never-left-my-hometown tone. The dark mage slowly turned his head toward him, staring at him silently through his mask. With a shrug the man decided to retreat to the party when he received no answer. It seems that fate is being specially cruel to me today Ragnarik thought to himself Surrounded by Imbeciles and unable to do my job. One disturbance after another. I should just gut every last one of them. I should string each one up by their insides and- A tap on his left shoulder interrupted his train f thought...not that it was going anywhere though. It was a woman in her late forties, smiling kindly with a plate of brownies in one hand. "Hey there. Would you mind coming with me for a sec? You seem like a capable young man and I really need some help." Ragnarik tilted his head to the left, wondering if he should start the massacre with her. But before he could form any coherent thought the woman pulled him away by his robe towards an isolated little corner on the road.
_____________________________________________________________________________________
Character Description
Magic: Necromancy
Ragnarik

"What do you think you're doing out here?" she whispered angrily "I know I didn't specify how you should get rid of her, but don't just stand there out in the open like that. What if you get caught? What then? It's a miracle I'm the only one who recognised you!" At this point Ragnarik was already dangerously close to bursting. The whole day just one big package of pure miserable annoyance. "So you're Ms. Coldflower" he grumbled "I recogmend you be as silent as you can be. I have my own way of doing things and right now the only thing keeping me from tearing your head off as well is the reward money." Ms. Coldflower stared at the dark mage with wide open eyes, as though petrified by fear. She was prepared to encounter someone vile, but not a man as bloodthirsty as him. The hairs on her body stood up as sh felt the cold, malicious intent behind mask gazing at her intently. Without saying a word, or risking her own life any further, she turned away slowly before rushing off into what Ragnarik assumed to be her own home. "Now then..." he mumbled "Now we wait."
_____________________________________________________________________________________
Character Description
Magic: Necromancy
Ragnarik

The full moon hung bright in the cloudless sky. Not a single soul wandered the streets not a single sound echoed between the buildings. Only Ragnarik, basking in the pale moon light, stood in front of Ms. Cooper's house. Steadily he headed for the front door, his eagerness for bloodshed tingling his spine. I swear, if the front door's unlocked then this'll be too easy he thought to himself. With a firm grip he turned the doorknob slowly. To his surprise the door really was unlocked. Such a nice naive little neighborhood. After tonight they won't ever feel so safe again. With a wide grin under his mask he pushed open the door. The floor creaked with every slow step he took through the main hallway and up the stairs. Like a hunter the mage tracked its prey with utmost focus; which in this case wasn't very illusive. It's loud snoring could be heard throughout the house.

Before the window stood a dark figure, a scythe held by it's side, towering over the sleeping Ms. Cooper. He slowly bent over so as their eyes would meet and with his one free hand he firmly covered her nose and mouth. As she was torn out of her slumber from suffocation the first thing she saw were the glowing green eyes of her assailant. Ragnarik raised his scythe, ready to strike the final blow, as he was suddenly interrupted by a sharp pain in his back. It was a man, about the same age as Ms. cooper, dressed in a night gown. He was shaking and his expression was one of both fear and shock. A chuckle escaped his control as he found these people's feeble attempt amusing. In a single swift motion he turned to the man, bringing his scythe down onto his mortal flesh. And like that the old man fell to the ground, a deep gushing slash across his body. All the while Ms Cooper sat in her bed without a word, petrified by fear and horror. "We're gonna have some fun tonight Ms. Cooper...Tell me. Do you like the color red?"