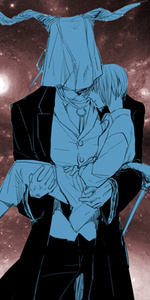 Before he could even prepare his attack he could feel a powerful surge from within him, rising up and out as a black aura surrounded and consumed him along with bones surrounding his forearm and hands like gauntlets, spiking out of his shoulders like pauldrons, and surrounding his lower leg and feet like greaves. He felt something like the bones of fingers grip the side of his head as his hair turned black. Congrats space weaver, you have achieved god force. Your strength, durability, speed and stamina have all improved. Anything you create whilst in this form will have no cost whilst also obtaining a boost. Nathir instructed just as a crash and crunch of bone erupted from behind Aether as he quickly turned around to face the man as the hole he had emerged from closed and sealed them in, the only light source now was the burning black sword of his mentor, lighting up all the small pathways, tunnels and tombs within the area. "Attack me with everything you've got Bone Slayer." The man called out to him, Aether doubted that the man noticed his residing magic power but he heeded the mans words and let forth six tendrils from his back, surrounding them with black bone and summoning forth his shield from his pocket dimension, only to have it lazily float behind him. His aura began to tinge itself a dark, maroon red as his shield and tendrils began to glow the same color, his lineage had been activated and all he focused on now was defeating whatever was in front of him. He could feel his muscles straining to contain the power they now had, he had felt the power of the guildmaster before him and it felt as though now he could rival him in terms of sheer strength. Getting down on all fours with all six tendrils flowing behind him like six tails, moving his shield up to the front he darted forward with a shield bash, the shield glowing a dull purple now to signify that the counter ability had been activated, causing whatever to strike this shield to be knocked back and cause no damage to the shield itself, only causing damage to whatever attacked it. If he were to miss Aether would quickly use one of his tendrils to swipe at the blazing sword in an attempt to knock it from his mentor’s hands.

Aether rushed at an amazing speed towards his mentor with his shield floating in front of him, keeping up with his speed and preparing for it to take the brunt of whatever attack was to come, however what he didn’t consider happening was yet another assault at the ground beneath him, especially when the ground above them had been weakened so much already. Before he could lose his footing he used his tendrils to hook himself into the wall to stop suddenly and suspend himself in the air, roughly 20 meters away from where his mentor stands and sending his shield at the same speed directly into his mentor’s blade as it began to be cloaked in flames and triggering the shields counter ability, causing the blade to be knocked away with explosive force, and with that cancelling the vortex effect that would have happened reducing the area the flames that would have spread down to half. As his shields ability went off it was sent flying back towards Aether, to where he would cause it to slow down enough to be able to attach onto his arm with little damage to himself.

Channelling corrupt energy into his tendrils he begin to tint all the bones within a 25 meter radius a midnight black and willing them to move, causing the shifting in the earth to cease as the bones absorbed the brunt of whatever magic was being used to disrupt the ground, however the ceiling of the hall and the surrounding environment had been damaged too much and caused a cave in.

As the ground and ceiling collapsed around him Aether reacted as quickly as he could, the tremors in the earth around him capable of being sensed through his tendrils as though they were part of a spiders web and using that information to cause an eruption in certain spots of supporting structures in the shape of giant bone arms and hands to stop the rubble from destroying the necropolis. Aether did all he could but the cave in had done substantial damage to the corridor they were in, locking Aether and his mentor in a dark cramped space with only the bony pillars supporting the loose earth above their heads with the looming threat of the earth still shifting above them that could cause the ceiling to cave in despite the added supports. His mentor, who at this point was still clad in charcoal black flames, was the only one at the moment who could get them out of this situation and Aether quickly began to think of a plan to get them out of this mess. “We don’t have much time, I’m doing my best to keep the earth above from crushing us right now so I can’t exactly open a bone elevator for us to take back up to the surface. The only way out of this now is for you to blast the ceiling and hope that none of the surrounding earth comes back down to bury us.” Aether explained to his mentor as dust and dirt particles began to fall from the earth above them. “Should be easy for you to break through, and don’t worry about me once you open the way I should be able to get out in time.” Aether prepared bone beneath him to use as a launching pad as he spoke in an attempt to shoot him up and out of the hole before he would teleport to safety next to Anima.