The Kingdom of Flames (Ardere's House)

The Kingdom of Flames (Ardere's House) 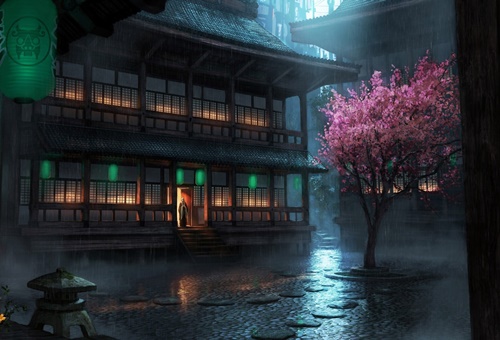 Exterior: A two story house, styled in the form of many family houses found in Midi. Designed to be more of a rectangular shape, with arched rooftops, and many pillars. The doors are all sliding doors, as is traditional. There are steps leading up to the main door, with a place mat for shoes to be placed upon entry. Colored plainly, only lantern decorations hang outside of the house. With a walkway in the front of the house, similar to that of a Western porch. One single Sakura Tree (Cherry Blossom) is found outside, near the stone steps leading up to the house itself. Outside, the Black Sun is parked. While the Black Sun is docked, it's sails are down.

Interior-Floor 1: Upon entering the first floor, to the left there is a couch in front of a lacrima vision system. The couch is in the shape of a half rectangle, made from a white material. While the house itself is styled like that of one in Midi, not all of the interior designing is. It is more of a mix between Fiore and Midi. To the right, there is a dining room with a table to eat at, attached to a kitchen with standard appliances. To the far back, there is a small indoor garden, which is notably well kept. Banzai trees and decorative armors are placed at the back wall.

Interior-Floor 2: Upon ascending the steps to the second floor, one would notice the many Midi style and Fiore style paintings of landscape. Katanas hand along the walls in random spots as a form of decor. There are two guest rooms, and one master bedroom. Each guest room contains a twin sized bed with a dresser next to it, as well as a banzai tree and two landscape paintings. The bedroom has a large King sized bed, with black sheets. There is a communications lacrima on the desk next to the bed, as well as a small lacrima vision system on the dresser in front of the bed.