With the dark twist purging her mind of the good memories they'd just made, Dela sat in her red snow, left to just watch Vera go through it as well but being powerless to stop it. Not only had her friend had to deal with a resummoning of all the ghosts and the horrors they brought, but in the end, an actual human met his end by dust dagger, which put a staunch period on the end of the dumpster fire sentence.

Though she was traumatized and in pain, Dela had watched as she always did. If there was nothing else reliable about Millicent Magdelana Hodgins, it was that her observational mind never shut off. There was something to be learned even from the worst scenarios, and this was a rare chance to learn about her two companions. They were just as secretive as she was, which was saying something. Admittedly, though, the images that had been shown to her of such a bleak future continued to haunt her, and in the silence that followed Scrooge's death, the blonde was left to suffer. Bloody palms rose to each side of her head and occasionally pounded her skull as if it would knock the thoughts out of her head and make them stop.

Her spiral into torment might have continued if Cillain's hands hadn't taken hers despite the gore. It was then she noticed he'd passed on his jacket to her, and just how cold her trembling body was. Unaware that someone like Cillian possessed a healing ability, the shock of feeling her pain lessen sobered her. Her bleeding stopped, though the aches remained. She met his eyes, grateful he was there. He was real. He grounded her in the present, reassuring her that the future she'd been shown hadn't happened yet and was still changeable. It was enough to start to force her way out of the depressing rut.

"I wanna go home..." she said quietly, almost a whisper since she didn't trust her voice right now. He helped her stand, scooped up Vera, and led them toward the closest safe place, which just happened to be exactly her home in the Rune Knights headquarters. She was worried about Vera, but even if Cillian was rather stupid, at this moment she trusted that he would have told her if their friend was in any pressing danger. If what Vera saw hit as hard or harder than what Dela saw, she understood the retreat into unconsciousness. She wished she could, as well, but showing that kind of vulnerability wasn't in her yet.

Upon entering the HQ, Dela all but ordered the substitute secretary to ignore the trio and informed her that they were going to her room. Before long she was hurriedly unlocking her door and nearly sprinting for her bed, which she shoved a pile of something off of and flopped down onto as if it was a mother's hug. Relief flooded her small frame and, if she'd been alone, she probably would have sobbed into her pillow until she fell asleep. Instead, since she had two guests, she rolled over to one side of her mattress so Cillian could lay Vera down comfortably. He wasn't getting his jacket back, though. She'd already snuggled into it and his smell was comforting.

Her room was neither tidy nor messy. It flirted with the line between, seeming a little cluttered and sporting a pizza box or two (which may or may not still have pizza in it) while also having a crumb and junk-free floor. There was a pile of laundry in her basket in the corner, but they were all freshly laundered, and not a dirty article could be found. She just hadn't bothered to put them away. A TV stand with multiple game systems sat equidistant from a couch and her bed, allowing her to comfortably binge TV shows and game from either place. A desk was nestled in the corner furthest from the door, covered in stacks of books, papers, magazines, tape recorders, and notebooks with a small clearing for her to work right in front of the chair. On the wall and obscured by the stacks was a bulletin board full of notes and pictures and maps, with thin strands of yarn pinned to connect them.

What might have been most jarring about her room to those that know her but have never seen it, was the overall theme. Snarky, street-smart Dela had a room that looked like a pastel, glittery rainbow had thrown up all over it. Everything was unbearably cute and girly. There were plushies of every conceivable animal lining the walls and empty spaces other than the floor and the counters of the kitchenette. Unicorns and cats seemed to be her favorites to collect. It was a whole aesthetic that extended to unicorn skins on her consols and a fuzzy pink border stretched around her TV. The bed she and Vera laid on had been covered with a comforting pile of plushies, though she'd shoved most of those off onto the floor when she entered the room to make space for an extra person. Also, though she showed little interest in it (other than an outlier moment at the rave), she had peppy dance music playing all the time, though right now it was annoying her enough to reach out and fumble through some clutter on her bedstand for the stereo remote. Once it was off, she sighed. Then she made an 'oof' sound.

A fat orange cat had suddenly jumped directly into her stomach, knocking some of the wind out of her. He must have been hiding under the bed. "Toulouse, careful..." she muttered, giving him an affectionate scratch behind the ear as her eyes trailed for the other one. "Where's Paris?" she asked, hearing a mrowl from the end of the bed, where a more skittish and slender white cat with emerald eyes was sneaking out for a look at Dela's first guests. Dela glanced at them as well, a little self-conscious about what all they could glean about her from her home, but also relieved they were with her. "Make yourself at home," she said, then motioned toward the kitchenette and fridge. "There are plenty of snacks over there if you want something."

Now was the time to unpack all that had happened at the festival. It had finally hit a point that none of them could avoid talking about, and even if that meant she'd have to explain herself as well, she wasn't about to let this one ride. Once they'd all calmed down, she had questions. 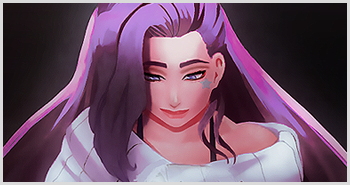 A while after their entry, the woman was coaxed out of her slumber by their gentle exchange, and at the sound of their voices, she refused to speak for fear that her own would quake and tremble from the grief. Vera-Jayne had no interest in doing something as simple as opening her eyes, for she wasn’t sure how to explain the tears that sprung so freely from them and as such preferred to stay as quiet as when she had been unconscious.

Many concerning thoughts on the good health of her friends and their cursed visions adopted her the will to open her eyes at the very least, under the need to check on them, but Vera-Jayne had taken great care to not say anything thoughtless or intensely stupid as it was normally her way of coping. She had a pitiful stream of black tears running down her cheeks, and a really careful way of positioning herself upright, with much of her hair covering her flushed countenance like a curtain. Of course, she did not want to be here, she was quite torn between running out of the room to scream from the top of her lungs or staying put to ride it out maturely with them, and was a reluctant example of the second option as she used the back of her hands to dry her eyes. How they burned from the ridiculous makeup smear!

And as she was not alone, it did not take long for her to notice them. Vera-Jayne gently took to inspecting Dela with glassy, pink eyes. Understanding personal space, she did not dare pry the jacket off her and made a mental note to do so later.  She knew where to get medical supplies if needed to tend to her wounds. What she gathered from observation and from a collective recall; she looked a little better than when they all just about got rag-dolled by a bunch of malicious spirits. Loathsome creatures that rendered them powerless with just a glance into their lives. It was quite so graphic, quite so wretchedly detailed. Such memories were not easily assimilated by the trio and this was the result.

Standing by the bed to shrug off her white coat, she moved closer to Cillian and wrapped it around his shoulders gently and wordlessly. After the awkward silence, she tugged at her long-sleeve mindlessly, chewed down on her bottom lip, and decided she would quench her thirst. She was so out of it she hardly noticed their feline companions and only did when she sat back down on the bed with a cup of water in her hand. The presence of the cats, the calming tones in the room, and the friends she surrounded herself with tethered her to a better emotional state and also to a very cold reality she found herself unable to escape. There were no questionable substances she could use to will away the emotional strain of seeing things as they were and it was actually physically and spiritually painful for her.  Selfish Vera-Jayne, thinking of shooting herself up with something as everyone was hurting just as much as she was, possibly more.


It was visible in the way she brought her knees tightly to her chest, buried half of her face into them as she tried not to recall her mother’s face among the corpses. It was hard not to recognize her massive white wig among the acrobats, the clowns, the lion tamers, and more. Most of the family, some of them vagrants her uncle, the ringmaster, employed under the impression of possible glamor and hope for their differences. Before she could get sucked into the baggage she remembered to breathe in the odd pizza box smell and gazed as warmly as she could in their direction, knowing they were going through something similar.

“We are doing relatively well considering we survived three very charming spirits and their exquisite sugar daddy. I  would prefer them dead, but we can’t always choose the music life plays.” Her voice was deep and ragged, knowing the little peace she felt was spent in knowing they were ok.

"Thanks for not kicking the bucket back there." She said meaningfully, almost as though they had a choice in matters of life and death.