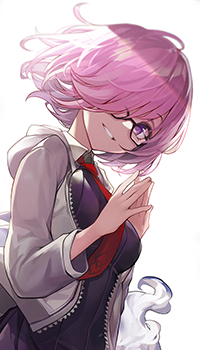 Another day, another mission. Brynn took a stroll into the Rose Garden medical center, pausing to reflect on the beautiful scenery that was around the lands. As a fond follower of everything that had to do with nature, she felt right at home here compared to everything else. Oh, if she could have only tried to get some seeds of flowers or trees for the garden of her own dreams. Alas, she was here on business and not leisure, which brought her towards the front desk. "My name is Bryn. I am here responding to your mission. There was a blood drive?" she asked the employee working behind the counter.

"Oh, yes. It's just another one of our weekly blood drives. Your insignia?" Brynn frowned, eyeing the man as she shook her head. "I do not have one." The employee didn't seem too shaken up about it, instead shrugging. "That's not a problem. Just as long as there's no bounty on your head. Follow me and we'll get you into a uniform."

Bryn stepped out of the back wearing a fairly size too small nurse's uniform, not what she had been accustomed to during her time in the lands. "Now then, it's a pretty simple job. Just offer anyone who's finished giving blood a drink, water, care for them. If you need anything, I'll be up front." With a nod from the woman, the employee was off and Bryn was on her own with the patients here. She carried a tray of cookies and water with her while approaching all the different people wandering around her. One such was a child and his mother, the first no older than ten while the mother looked to be into her late 40s. "Would either of you two like a cookie?" Bryn asked, lowering the platter for the boy to take one. Instead, the mother would slap his hand away and eye her with pupils of scorn.

"My son is allergic to these things!"
"Ah-I am very sorry-"
"You damn well should be, you ill dressed harlot!"

The mother would drag her son away leaving Bryn to stare in a mixture of amazement and confusion. Was something wrong with the cookies or something? Everybody else seemed to have little to no qualms with such. She moved on with her duties. Around the first hour, an elderly woman wobbled out of the room where the patients had their precious lifeblood separated from them. Bryn had caught the woman in her eyes and before she knew it, the elder looked to be ready to spill over onto the floor.

Bryn set the tray she was carrying down, though it was more of a toss, and rushed to the woman's side. She arrived just in the nick of time, as her arm reached out to brace around the elder and keep her head from slamming into the ground. After that excitement, Brynn would report back to the front to collect her earnings and change back into her usual looks, flipping her hood up and walking out of the door.