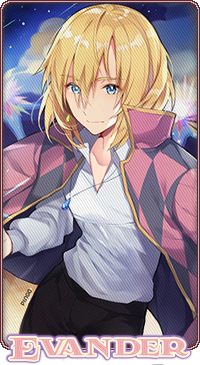 It had been a while since Ruvel's last visit to Rose Garden, the places he generally went to within this town was to meet nobles and clients. This was his task within his guild and one that he took his seriously, as without good public relations their business would end up dead. He wore a smile, done everything needed however most of the time he hated being around them. They came off as they where better than everyone else but he guessed that this was the way of things, all he could think of was Rasparov's words that how he had to act like this at times, that it came with the rank he held. It made him feel dirty when he had to lord over people, it made him feel like he was one of those he was tormented him for years on end. That stuff was behind him however he had done his duties for now but would have to go back for a ball later, but that was later for now the sun was shining and there was a subtle and warm breeze that he was enjoying. "What can I do before the ball?" he asked himself, his dual coloured eyes watching as he seen children playing in the street and as a festival was being set up. "Tolgalen should have a festival soon maybe..." he said making a note to mention it to the others as soon as he returned.

It was then a woman stopped him in the street a smile on her face and handed him a flyer, he looked down at it but had no idea what it said "What's this?" he asked with a warm smile "Oh it's the normal quarterly blood drive, we are hoping that healthy young men and women are willing to contribute, especially with the issues that have happened with those summoning seals all over Fiore." her voice warm but holding sadness, he had no idea what it meant to contribute blood but he knew in his mind that this was bad, at least for him. "I don't know..." he said honestly he knew that it involved blood coming from his body and if that wasn't bad enough his blood wasn't normal "I thought someone of the West Fiore Trading company would be willing to help in such a manner." she said tilting her head, he sighed knowing that the company would do what they could and so nodded "You're right, I'd be happy to help. Where do I go?" he asked as he watched the woman turn the flyer over revealing a map "Just follow the directions, your donation will be appreciated." she said with a smile Ruvel could only nod as he waved and walked towards the building in question. 'Great, what did I just get emotionally blackmailed into.' he thought knowing something bad was bound to happen, if not with the extraction of the blood then the blood itself. It just dawned on him that he might be taken and experimented on again and that's if those who tortured and abused him most of his life. This simple task now made him frightened as dread started to fill him with each step he took.

The train was quickly cutting through the light of the afternoon, stressing away to its last destination -- Rose Garden. It was huge train composed of many wagons, almost as if it was transporting thousands and thousands of people at once, which, might have just been the case. It was the annual blood drive in the Rose Garden, an event that attracted many people from all corners of the world, despite being a very bloody event. Each wagon contained excited tourists who had their roots in many varying cities.

In one of the wagons was Evander Catharyes, staring out of an enormous window. The sight was beautiful, especially since he had never visited the Rose Garden before. Whilst he was enjoying the view, the rest of the quiet crew that accompanied him was secretly inspecting the clothes he wore. Something there interested their eyes far more than this beautiful sight. What could it be? It surely couldn't be the fact that Evander was wearing a pinkish-red mantle with a golden bracelet around his right wrist, made out of small golden leaves. Or could it be?

After almost an exhausting eight-hour journey to Rose Garden from the city of Capital Crocus with no conversation whatsoever, Evander had enough of this. "Where are you all heading?" he asked openly, now directing his attention to the other three passengers sitting in the same wagon. "The blood drive, in Rose Garden." a gentleman in costume said. "What drive..?" asked Evander insecurely. "The annual blood drive, of course, you don't know about it?" said a lady dressed in pink sitting in front of Evander. "I'm afraid not, what is it?" replied Evander. "Oh boy, have you lived under a stone for your entire life? If you don't know what the annual blood drive is, you surely have missed something." said another gentleman next to the lady in pink. "It is a worldwide celebration and a huge event. Millions and millions of people attend it every year, just to donate their blood." he continued. "I see, interesting, where is it?" asked Evander curiously. "Here, take this flyer, there's a map on the back that you can use to get there." answered the gentleman in the costume. "Are you sure, sir? Don't you need it?" said Evander. "Nah, don't worry about me, I've been here plenty of times, I know the way." replied the gentleman. "Well, see you there then! Thank you, sir!" Evander said.

As the conversation ceased, Evander stared out of the window yet again, this time, his mind was on something completely else than the beautiful view. 'Seems like there are a few more than I expected that is going to the blood drive... I swear to God I'm never taking a job from this guy again, this is the second time he's not given me accurate information!'

And so, Evander was now on a mission that he had originally only expected a few hundred at most would attend, but now was facing millions and millions of people.

After around five minutes of walking Ruvel found him outside what he believed to be a hospital, it seemed like there was a huge celebration going on here which caught the youth off guard that was for sure. "I thought I was here to give blood but now I'm wondering if I'm going to be damphy the clown." he said to himself unsure on what to expect, he was dressed in his white hakama, his white and ice blue hoodie and his haori with golden embroidered symbols some of them meaning blessed while others meant cursed. He stopped listening to the music watching as some stalls where still setting up, the sweet smell of foods in the air "Is this a big deal?" he asked biting his lip his eyes looking at the flyer once more 'Shindara what does this say?' he said allowing the summon to read through his eyes 'This is an annual blood drive celebrated by the whole of Fiore our summoner...' he heard knowing that more information would be tacked in by his twin 'They make a giant celebration of it and even get help from mages to entertain the children who may be afraid.' Amuul gave the last of the information needed. "So I'm safe?" he asked the starting to move once more.

'Yes, our summoner. You are here to entertain...' Shindara sent to him once more, he moved into the building to see what kind of things had to be done, he hoped there would be no paperwork as then there would be another issues needing addressed. He walked up to a table and smiled to the gentleman behind it "Can I help?" the gentleman asked making Ruvel hold out the flyer "There was a woman giving these out, I'm here to help." he said with a gentle tone "My name is Ruvel Mizune, I am the vice president of the West Fiore Trading Company." he said bringing up his left sleeve revealing his guild mark "Oh wonderful, we will just need to see if we can get you a partner then then we can get you both working together on a project." the man said standing taking Ruvel to a set of chairs nearby until a suitable partner for him. Ruvel followed quietly and sat down quietly "Thank you." was all he said as he looked around, in honesty he felt uncomfortable about being in the hospital because it meant medicine and he hated his medicine with a vengeance but at least he wasn't getting jabbed this time so quietly waited. He heard laughter and turned to look, seeing children and adults alike playing games such as pass the parcel and musical chairs. He had to wonder if this was something that was normal, if this is what his childhood should have been like, what it could have been like if that fateful day hadn't happened. He knew it was pointless to think that way, the past was the past and nothing would change it no matter how much he may have wanted it, this was how his life had played out for better or worse.