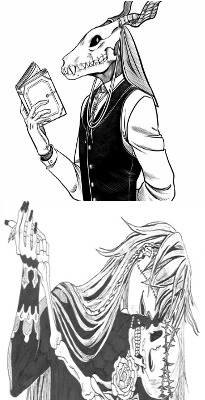 "Remind me, Sir. Why did we come to town again?"

"I had errands to run but I forget what they were... I feel like everyone's staring at me..."

"No one is staring at you, sir. You're a normal young man escorting his lovely secretary though town."

"Migi. I do not believe there is anything normal about this."

This particular exchange was being shared by infact quite the odd duo who were wandering, seemingly blindly, the streets of Magnolia. The male of the two was encased in thick and dark furred robes that coated allmost his entire body, the arms ending just enough to show a few pale fingers, human thankfully, sticking out. The hood wrapped tightly around his face and neck, with a large Deer skull mask hid the man's face from view, though the eyeholes could show soft blue eyes peering out. Around his neck was a small necklace of loose bones, all engraved with different names. As he spoke his voice was soft, conflicting with the dark appearance he held. To his side walked a much more direct image, a true Skeleton. The skeleton showed no gender, but when she spoke it was in a more demanding and regal tone, her body wearing a ragged and old rose colored dress, a small round hat decorated with black roses and a soft veil that covered her eyes was visible but did not hide her skeletal exterior. The woman, named Migi, carried with her a small notebook that had several things marked across it, conflicting the lack of any actual possessions the man had. As his words had came, she had looked at him before letting ring out a bit loudly, "And what, dear sir, do you happen to mean by that?"

"I do not believe most people are accustomed to a man walking around under fur and bones with one of his familiars. Most people I think are afraid of the dead..." Proceeding to mumble after his reply, "Thats why they are probably staring... I am kind of a freak.... Anyways... Check.. Um.. Check the day planner. Maybe you already jotted down what I was in town for without realizing it." The Skeleton gave out a huff, and while lacking the facial ability to show her offense her tone certainly held it. Opening the notebook as she began to scold her master. "I never... I do not happen to take notes without meaning to, and I would have CERTAINLY remember-... Oh.. Oh yes, here it is. The Tenth, you aimed to pick up more provisions for the camp, and gather up some presents for your fallen friends. Really, I never understood your obsession with continuing these holidays with those few. They've been gone for a long time, master." Under his hood, the man just smiled a bit, chuckling a little. "I guess its something only I'll understand, right? Come now. I won't sully my tradition with logic. Lets see what we can find."

Re: Seasonal Skeletons [Open / No PVP]

Maybe it had been a little too early to drink this much.

Mythal stumbled out of the bar, taking a moment to pause by the door and catch his bearings. He’d done a bit too much celebrating after that last job. It had ended well enough and plenty of jewel had been had so why not spent it a little? He had paused on his way back to the guild at one of the bars he knew very well at this point. One beer turned into five and one shot turned into… well, he’d lost count at this point. He was well and good on his drunken level and he was feeling fantastic. He chuckled a little as he took a solid moment to stand up straight and give a quick shake of his head, hoping that might clear his vision. It did not.

"Gotta get back to the buildin’,” he said triumphantly, thrusting his hand outward like a noble adventurer pointing out the directions. His feet, somehow influenced by his speech, began to move but not without a little tilt. Once he had willed his body forward, his hands found their ways into his pants pockets and he was off. He knew where the guild was by heart at this point and probably could sleepwalk there if he truly wanted to. Sleeping; what a novel idea. His eyes seemed to waver just a tad before snapping open suddenly. He would fall face first into the ground if he did that. He pulled his hand out of his pocket temporarily to smack his cheek, shaking the sleep from his face for the moment.

It was then that he saw it… or them. Well, he wasn’t entirely sure what he was seeing. Down the road was a pair of humanoid beings, he presumed, strolling along like it was an everyday walk. Normally human beings walking around wouldn’t have affected Mythal one way or the other but… one of them had a rather large, bony animal head for his head and the other was a literal walking skeleton. Wearing a dress of all things. The God Slayer stared, fairly slack-jawed, as the two of them briskly went around a corner and went about their way. He had been asking the people around him questions, which had only driven those self-same people away in fear.

Temporary soberness hit him like a ton of bricks and he took off down the road, skidding across the brick street as he came around the corner and watched after the couple continuing to move. He then darted down and came to a sliding stop in front of them, cocking his head to look between the two. Yet it wasn’t fear in his eyes; rather, it was amazement. "H-Hey,” he said, offering a drunken little wave. "You guys new to Magnolia? Also are you aware that you’re both… uh…” How did he say this without offending? "Bony?” Re: Seasonal Skeletons [Open / No PVP]

There were many things that Yuuto expected today. Not someone rushing to impede their path and then throw out questions their way... actually, in reality, thats what he and Migi had been doing to others this entire time. Though before Yuuto could reply to the duality of the man's questions Migi had already placed fists on her hips, and scoffed out. "Bony!? Well I never! Are you implying I should eat more sir? Is my figure not up to your standards of beauty!? I'll have you know for a woman my age I am very much the picture of health and you sh-.." Yuuto would spare the man more of her verbal lashing, raising a hand to which the woman would stop and return to a more neutral stance. Her skull lacking any real display of emotion due to well.. Skulls. Equally, while Yuuto was smiling beneath his mask, it didn't offer more than those beautiful blue eyes back to the gentleman as he spoke.

"I apologize for my familiar. She can be fairly defensive about things. Yes, we are fairly new to Magnolia. In addition, I think we are both aware of our boney status." A slightly akward chuckle leaving Yuuto before he offered his hand out, the hand thankfully NOT a bone but pale enough one may as well worry about his health regardless. "Doctor Hakaarashi Yuuto, and this is my Familiar Migi. We had came to town to purchase some holiday gifts for some old friends of mine, but unfortunantly I am both poorly versed in the art of gift giving just the same as I am poorly versed in navigating the town. I suppose it doesn't help that the common person would fear my visage either. Tends to be a massive problem wherever I go, and I can not begin to tell you the amount of times I've been attacked on the road by other Wizards who assumed I was some monstrosity." Migi immediatly checked her notes, and replied, "Fourty Seven." He frowned beneath the mask, "Thank you, Migi..."
_____________________________________________________________________________________
Yuuto Hakaarashi | D-Rank | Guildless | Bone Mage
Profile | Bone Make Magic | Backstory
« View previous topic · View next topic »