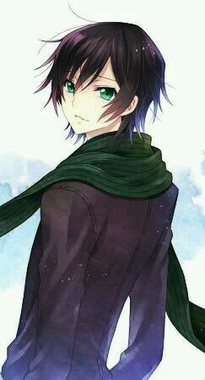 Izayuki wrote:Job Title: The Walk Home
Rank: D
Job Location: Any City or Village
Solo Word Count: 500 Words Solo
Group Word Count: 1000 Words
Additional Requirements: The client must be escorted home safely. The job ends when all enemies have been defeated (knocked out or scared off, NOT killed) and the NPC has reached their home safely.
Job Description: The client has stayed out far later than they have intended to. They are afraid of walking through the streets at night and have asked for your help. Make sure that they get home.
Notes:

Enemies: Enemies are optional. However, if players choose to use them, here are suggested types. Details such as appearance, stats, magic, and armament are up to players.

The Walk Home:
The time had come for Demian to make his first move as a Guild mage. In an attempt to figure out what he ought to do for his very first job, he decided to take a stroll through the night. He was visiting the town of Magnolia during that time, a place he was most fond of. Quiet, calm, a good place to relax. Well, it was that way most of the time. As he walked, he continued to contemplate his entry into the magical working world until he came up to a local library.

Entering through the front door, Demian took a look around the old brick building. A bit dusty, but it had it's own form of beauty to it. Books lined the walled, and in some places they stacked all the way to the ceiling! "I don't think I've seen a lot of places that had this many books," he thought to himself. He wanted to take some time to explore, but then someone came up to him. A stranger. A young adult (probably a few years older than him), a woman.

"Excuse me, but are you a mage?" What a surprising question. Though Demian was indeed a mage, he wasn't very experienced. He wasn't even at the point where he knew definitively what his magic even was. Still, he was. And he was in a guild, no less. So, he answered honestly. "Yeah, I'm with Sabre Tooth, actually. How did you figure it out so fast?" Hearing this question, she answered honestly. "I saw your mark. See? It isn't covered," she said pointing to his neck where his guild mark sat in plain sight. "Anyways, since you're a mage and all, I was wondering if you could help me with something?" Seeing Demian nod, she continued. "See, I've been studying here all day long, and I need to head home soon. The problem is, I stayed here was longer than I originally planned to and now it's very late to be out at night. Embarrassing as this may sound, I'm afraid to walk home alone because I live pretty far from here. Would you walk me back?" Giving her a pat on the shoulder, Demian assured her. "Absolutely! I'd be happy to help." And so, after gathering the young woman's things, the pair exited the library and walked into the night.

The client wasn't kidding when she expressed her fear of walking outside during the dark hours. She clearly wanted to be home quickly, and Demian made sure to keep pace with her. Staying close, he occasionally assured her that she was safe. If anyone were to try anything, he'd be right there for her. Just as he thought about the best ways to deal with potential threats, the two stumble across something. "Speak of the devil."

There stood before them too intimidating looking men. Standing tall and firm, they shouted at both Demian and his companion as they stopped in their path. Slowly but surely, they stepped toward the two young ones, and Demian looked over to see how his client was doing. She wasn't breaking down, but there were clearly some nerves. He was nervous too, as he hadn't encountered much real danger in his brief time. Still, he was a mage and he was on the clock, it was time to step up and do his job. Telling his client to stay behind him, he began to step toward the two Hecklers just like how they approached him. "Look, neither of us want any trouble. We're just trying to walk back home, so if you'll leave us alone then we'd really appreciate it." The looks on their faces said that they weren't impressed. "Are you kidding, boy? You're not so tough! Come on, you're a couple of kids. How about you just give whatever money you've got with you, or even better, you both come with us? Come one, you won't regret it!"

At this point, Demian's client began to shake. He could feel it as she held onto his shoulders from behind him. "This isn't good," he thought. "If she panics she may try to run. That would just put her in more danger." He had to act before it was too late. Turning and facing his client he quietly said, "Stay calm and let me handle this part, okay?" She silently nodded after a deep breath, and he took this as his cue that it was time. Turning back to their assailants, who were closing the distance and almost close enough to make physical contact, Demian stood tall and firm. The two stopped in their path, sensing what the young mage was trying to do, and mockingly decided to oblige. One of them stepped forth and attempted to lunge at Demian. Unfortunately for him, that was a mistake. As he jumped foward he had left his center exposed, and Demian took full advantage. Delivering a swift and hard yuhp kick (out of game: you know, "the Sparta kick"), the mage sent the first Heckler back a couple of feet, and the man didn't appear like he wanted to continue after that. Seeing his buddy run off, the second Heckler shouted and cursed that his counterpart would just run off at the first sign of danger to them. The look on his face said that he wasn't going to just take that. Stepping toward Demian, the latter took notice and responded swiftly. Lunging toward the remaining Heckler, Demian threw out his arms and let out a yell like he was about to charge head first into an epic battle. Luckily, this was enough, and the last assailant screamed a little before running off into the night.

And with that, the danger had passed. Demian had won! Turning back to his client, he asked if she was okay and was relieved to hear her say "Yes." With the disruption behind them, they continued their walk. They conversed a little more along the way, talking about themselves, life, what had just transpired, etc. Then, finally, they reached the young woman's home. It was a small, simple shack on the ourskirts of town, away from much of the commotion of day to day city life. Reaching her front door, she turned to Demian. "Thank you for tonight. I don't know what happened to me back there, I just... froze. If it weren't for your help I don't know where I'd be right now." Demian smiled and accepted her gratitude. "I'm always glad to help those who need help," he said (maintaining eye contact, of course). She smile back, and wishing him a good night, she entered the safety of her home. With that, Demian walked off into the night and tried to collect his thoughts on everything. Then, it dawned on him.
"I haven't hit a tavern in a little while. This needs to be remedied."
Word Count: 1,151
« View previous topic · View next topic »