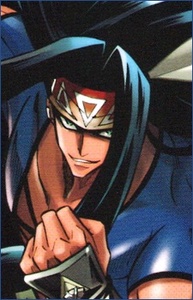 Spoiler:
Job: Escort on a train
Rank: D
Player Requirements: D-rank and above.
Job Requirements: Minimum of 5 posts of 150 words per character. Must by all means make sure that she gets on that train and stay on ride.
Job Location: Magnolia
Job Description: A scared person requires help riding a train, but because of his fear will not even get on it. He requires to get to his destination by tommorow and the train is the only viable way of travel. So his spouse in order to secure his career has gathered her savings to hire a mage to escort her husband to the train. He is so scared out of his mind that it will be required to drag him on the train kicking and screaming and make keep an eye on him so he won't jump out. You also cannot do any lasting damage to him as he needs to look presentable.
Reward: 500 Jewels

“I can feel it in my bones, this is going to turn out to be a very good encounter. Giving people courage is what I do best, just like the tribes of by people back home. “ Making people feel a little more motivated in regards to themselves was something that he could get behind, even though it felt a little like Yhato was babysitting someone that was close to his age. He wasn’t necessarily having any second thoughts about it, but he thought that phobias involving transportation felt a little weird. Wouldn’t they be excited about how technology came about in the few years that passed? “Oh, looks like this is the place….” Yhato would say as he started to knock on the door and beat his chest. “Great Morning, I am Yhato, and I am here as an escort for Mr. Bridges?” The back door started to creek open as Mr. bridges tried to sneak on out of the house in order to avoid the escort but his wife was right behind him, holding his ear in a tight grip. “ouch Ouch!!! Ok, I’ll go!” Seeing the man be treated in such a way kind of made Yhato be happy that he wasn’t married, maybe that was some kind of slavery in the modern world?

Mr. and Mrs. Bridges? My name is Yhato, I’m here to take on the assignment at making sure a respectable man makes it to work on time by the use of the train. “The man squeaked as he went behind his wife, shaking. “Don’t kind him Mr. Yhato, I really do appreciate the help that you are providing for our family such a very important service of escorting my miserable husband. “The woman then looked to Mr. Bridges with a hard stare. “Don’t mess this up harry!!!” After that she waved and slammed the door behind her, leaving Yhato with her husband. “Ok let’s go!” Yhato would say as the man groaned and followed along, which was a good thing too. The last thing that Yhato wanted to do was hurt the man, or even embarrass him by carrying the guy around on his shoulder. So far, the man was cooperating, so that was good. However, it started to be more and more apparent to Yhato that the man was starting to get nervous as they approached the train station. Yhato felt as if it was his job to reconcile the client so he started to calm the man down.

“Come on, it can’t all be that bad. This is my first time riding this thing as well, so let’s enjoy this experience together. “ And then the struggling started. “no, I don’t want to go!!!” Mr. Bridges tried to make a dash for it away from the steps, but Yhato caught him just in time and placed the man on his shoulder. “There we go! You’re actually not a lot heavier than I thought you would be. “ Yhato would say as he arrived him all up the stairs and placed him down on the platform. “Hey, I think mages can afford lawyers too, please try to avoid any more unintentional assaults. Thought, being the country bumpkin that I am, I think most cases end in a trial by combat. “ Yhato took out his flask and took a swig as the train started to come. Upon its arrival, Yhato put the flask away and started to motion the man over to the train. “Comeon, what is my wife paying you in order for you to do this?! I’ll double it, triple it!”
With a light push onto the train, Yhato folded his arms and looked the husband in the eye. “Hey, are you sure you want to go out there? I’ll tell you, it’s a lot scarier once you enter the train and leave before its your stop. “With Mr. Bridges making eye contact with Yhato, he was in a malefic illusion where there were monster outside of the train. As a matter of fact, it was basically a world of monster that were screaming for the man to come out so they could feast upon his flesh. Mr Bridges cowered in fear as he held on to the train pole.

“I t-t-think I’ll stay…”Yhato nodded in approval as Mr. bridges looked a bit crazy for a while. But luckily, Yhato times it just right so that the illusion ended as soon as he reached his stop. “There, it’s your stop, so the monsters are gone. Easy huh? Now, don’t you have something important to do?” The man went outside and nodded. “ Y-yeah…thanks for protecting me. “ The husband said as he bowed respectively and walked away.

Ability- User can trap foes in a murderous and twisted world to mentally cause damage to them. By making eye contact with the lineage bearer the victim sees the world fade out to be replaced by a mirroring world of horrifying images and monsters. The monsters can replace allies or bystanders ins their mind, or if none are present simply appear without a real world counterpart. The monsters attack the victims making them feel damage but it is not real and goes away once outside of the illusion. No effect on enemies of the same or greater rank.

Usage: Effect lasts 2 posts and can only affect someone once per thread. Strong willed victims can find ways of dealing with it.