Re: One Frustrating Day...

Haia grins Rai's idea. but then sees Rai's somewhat disembodied arm. Haia sighs and snaps her fingers, a radiant light blasted Rai, but not hurting the lightning mage, but instead healed his arm properly and he looked way better than he was, like he had never fought the twins. Haia satisfied with her work, took off to the sky. Chip and Chen definitely were keen on hitting her, the sword they carried beginning to move towards her dangerously. Haia flips over the sword and lands on its flat side. The twins were definitely surprised and raised their robotic arm to try to flick Haia off the blade but the girl was too quick and slides out of the way. Haia raised an arm to the sky, and chanted out her the spell.

"Radiant light! Oh bless me, the Hopeful one, and let me bring forth judgement worthy! Valkyrie's Blade to me!" Another radiant light beamed down from the heavens, clearing the skies of thunderclouds and revealing the sun that was sky high above them. Haia was rather convinced on why people shout out the name of their spells. It was cool and epic to bellow out something powerful, something only few in the world are capable of wielding. Magic.  Haia spreads her hand as light swirled around it in a radiant dawn, the horizon showing capable of seeing the brilliant light that befalls her. Haia was full of hope, hope of getting out of here, hope of finally being human. Haia could feel the hope of the scattered townspeople, who have been wishing for a savior since the twins took upon the amulets and turned the town to a toy version, to nothing but a hollow shell of the spirit they once had. Haia was not going to give up now. Haia, despite her toy body, was brimming with hope. Something deep within her resonated, a brilliant force. It was neither good nor bad, but it definitely resonated with the intentions of the body it inhabits. Black and white swirled around her and her sword formed, looking more radiant and beautiful, a glorious hilt and a beautiful white blade. An angel wielding a sword, pointing to the sky was engraved in the white. Haia leaps over the twins' second attempt to grab her, as black and white radiated from her body. Haia reaches a joint and gives it a through stab and drives the blade deep, breaking the arm of and forcing the twins to drop the sword.

In their frantic effort to grab the sword with their left hand, Haia zooms and does and aileron roll, becoming a drill of white, black and blue and piercing the arm off and floating to the sky. The robot was left with just the upper arms and its legs. Haia then saw the glow of the orb on its chest, it hissed and the sound of charging erupted from it before a laser reticle appeared and pointed at her. Haia predicted what was coming and narrowly dodged a beam that blasted the town below. Haia needs to question how in the world did children get hold of something that dangerous. Haia twirls in the air before dropping down, turning into a mid air buzzsaw and cuts the orb in half, causing it to burst and explode. Haia landed and stood in a stance. Haia's hair blew with the win, with brilliant blue and black wings danced in the wind like a cloak as Haia panted, a smile on her face with sword brilliantly shining with radiant hope. The girl watched as the robot fell apart, the arms that were cut off along with the sword disappeared into beautiful blue particles. Suddenly, everything started bursting into clouds and what seems like something white rippled from the twins, who laid laughing on the ground, their amulets broken. The whole town glowed white and a bright flash happened. Everyone was human again, dogs were back to being dogs and houses were restored like nothing was destroyed in the fight. The pirate toys and wolf toys went back to being lifeless and on the shelves of many toy stores throughout the city. Haia looks around before looking at herself.

Haia's look at this moment: Haia certainly looked different, she was human again. Her hair was no longer short and black, but long, white and beautiful, soft and silky looking, like silver. Her blue eyes shined a brilliant sky blue, like a beautiful aqua marine gem. Her clothes even looked different. Her jacket was white, no longer black leather, but a soft cloth with red highlights and a hoodie. The corset she wore underneath was also cloth too, the red highlights gone and instead replaced with a red ribbon tied in a bow around the collar. It was also no longer a corset, but a dress, with translucent frills but grew opaque towards the crotch area so at least it was decent for the public. The frills that cover her behind where longer and reached the back of her knees, curving up to join with the short front. Two black ribbons hung below, nearly touching the ground spread in a V. A white belt hung on her waist with a white quiver with Orion's arrows in it. Her bow too was latched on the belt. Haia look at her legs and see they were covered by a black sock with red highlights and a white sock, with similar highlights. She wore shoes that looked more dainty than her boots, but definitely still fight worthy. Haia then looked at her right hand. It had a black glove with red highlights and definitely was snug with her hand's shape. Haia stared at herself, bewildered. Haia was even more surprised that she was taller, about 6 feet 7 inches and had a larger bust size. Haia twirls a bit before watching her blade disappear. 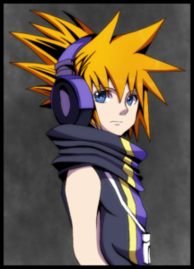 Re: One Frustrating Day...

As they were ready to get Rai's plan underway, Haia used her fire to heal up his damaged arm. At first, it surprised him cause she was catching him on fire but quickly calmed down when it was more soothing than painful. With Rai's arm healed up, Haia went on the offensive while Rai went to get Dante and inform him of the plan. After Dante had toppled the giant robot, he was found getting ready to make another sneak attack while Haia had it distracted but Rai quickly grabbed him before he jumped in. Once Dante was up to date on the plan they sat and waited for their moment to strike and end this. In truth, Rai told Haia what she needed to know in order for Rai and Dante to pull off a different plan. For you see, Haia was the distraction. While she was running around causing trouble for the twins, Rai and Dante were going to sit and wait for the opportune moment to attack the twin's amulets. Twice now Rai has noticed those amulets glow before something toy related happened. He had all the proof he needed to believe it was the source of their magic.

Once Haia finally managed to destroy the toy robot entirely, and the twins landed on the ground, Rai and Dante took action while the smoke clouds were still covering their movements. "Now!" Rai yelled as they took off. They jumped high into the air over the twins who were lying on their backs with the amulets exposed. Rai went for Chip's amulet while Dante went for Chen's. Dante put all his rage into his next attack smashing the amulet into pieces. "This ends now!" he yelled doing so. "Thunder God's Might." Rai said charging his muscles with electricity to enhance his next attack. He raised his leg above his head and dropkicked Chips amulet shattering it at the same time as Dante smashed Chen's.

Once the amulets were broken, the entire town returned to normal including Rai, Dante, and Haia. Rai never see Dante pull out and light a cigar so fast in his life. He took a deep inhale and exhaled slowly "Ahh... That's the stuff..." Dante said in response. Rai was just happy to have his music playing on his headphones again. It didn't take the entire town long to come over and thank the mages for their service's. After a couple of hours have passed, Rai and Dante said their goodbyes... Ok, Rai said his goodbyes and went to go collect his rewards and finally go home.