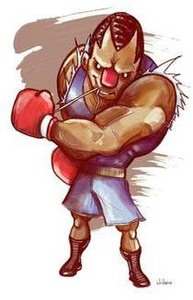 “Hmmm, so we mages of Fiore are allowed to take jobs in other nations with a passport we can get here? Why not,” Oliver said to himself as he walked across Hargeon Town and found himself near the docks. He saw a huge line of people along with several banners attached to poles that said “Get your passports here in order to offer your magic powers to clients across countries!” The boxer was intrigued, so he got in line. It might take him an hour or two to get one, but that didn’t matter. He didn’t really have anything to do after all.

And so, Oliver stood in a very long line of eager mages. He had on a blue tank top and blue boxing shorts, brown boots and red magic boxing gloves. Earlier he was doing his daily exercises in order to keep his body fit and ready to take on the various jobs within Fiore. Now that he would be able to take on international jobs, he would want to work out even more, especially if he was going to have to travel long distances to do some of his work. Even though it would take more time to do these jobs, the dark skinned mage was rather excited.

“Can’t wait to get my passport! Fiore is great and all, but it has always been my dream to see new places! This gives me a reason to start traveling, since I will still be getting money while sight-seeing!” a young woman behind Oliver said enthusiastically.

“Yea, this is a pretty great deal. I also like to see other places, so I will be using this passport almost as soon as I get it,” Oliver said to the female, turning around to look into her eyes. They both had a long conversation after that, sharing their job stories. After a while, they didn’t have much to say and started minding their own business, but they exchanged information before doing so, in case they wanted to see each other again.

The line was moving slowly, but eventually Oliver was got to the front. After an hour and a half of waiting, he was finally going to get what he was waiting for.

“Name please,” the worker who was sitting behind the table asked.

“Oliver Windhelm,” the boxer replied with a smile. The worker had a bored facial expression however. Oliver didn’t blame him, since he had to keep giving out passports for hours on end. After a few minutes of getting it ready, the worker gave Oliver a passport. The mage was so excited that he took the pass, shoved it into his pocket and left quickly. He was going to go to the nearest library so he could start researching the other countries. He had only been in two. One being his homeland and the other being Fiore, the country he was in right now. The man wanted to know about the others as well if he was going to be doing international jobs now.