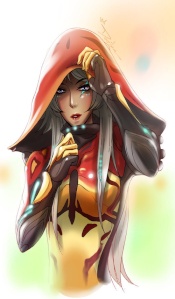 Ivara stepped into the bright city of Rose Garden where she is set to start getting a passport for ease of access to other jobs assigned to her in other countries. Sure she could have just did what she would normally do and taken an illegal trip to the other country by a little row boat, but this way is so much easier... Only difference is that it would cost her extra to travel to another country. Besides this time she would follow all the laws that limited her mobility, at least for the time being or if some ulterior motive were to rise up.

The first stop on her journey would be a little window shopping for large hats and thigh high socks. Sure she couldn't afford any but it was freaking Rose Garden! You would be mad if you didn't do any sight seeing while here. It isn't called a magical wonderland for nothing! She arrived at a small little kiosk that had many different colored knee socks that obviously clashed with her outfit. She was a little upset but it didn't matter as she wouldn't buy a single pair anyways. After a quick sigh she lowered her hat over her head and started heading to her second destination.

The next stop on Ivaras list was the shop called "Mega Hat Emprium." It was mostly a gentleman clothing store but they did supply the largest selections of headwear that was gathered in a single place in the entirety of Fiore. She shyly went up to the cute desk clerk who was obviously very open about his preference in romantic affairs. "Hello... Where are the over sized hats?...." The shy mage asked the clerk. "Well oh cutie over here, the over sized hats are over there in isle fourteen right next to the trilbies. And by the way, I absolutely adore your outfit sweetie."

The clerk gave Ivara a smile as she blushed and pulled her large hat over her face. She quickly turned around, still blushing, and started heading towards the isle the clerk directed her to. Once there she opened her mouth and let out an absolutely adorable giggle and she started to try on every single over sized hat in the lot. This was where she needed to keep her wallet away from her prying eyes. She was about to try on a giant frog beanie as she remembered she came to Rose Garden for a reason. She quickly called out to the clerk and asked him for the time.

Quickly she burst from the store throwing the hats to the ground and sprinted to the harbor. The docks were closing and she needed to get that passport that night so that she can report back home. Ivara quickly gained land as she made her way to the area that they were handing out passports as she basically shoved past crowds of people and running across busy traffic. In a matter of minutes she made it literally five minutes before they were going to close. She swiftly handed them the payment fee and in return, they granted her the passport. She smiled and slowly started walking to the hat store again for some more window shopping.
« View previous topic · View next topic »