Margaret Elle and The Goldfish [Job: Where's My Goldfish Part 2] 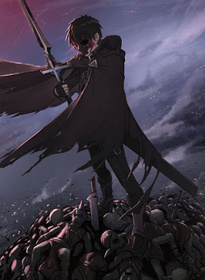 Margaret Elle and The Goldfish [Job: Where's My Goldfish Part 2]

Margaret Elle awoke to the frantic knocking of someone outside her door. She had decided to spend the night in Clover Town and had fortunately found a cheap inn to stay in. Last night’s meal was decent and bed was pretty ok, so even though she was forcefully ripped out from the realm of sleep and dreams she felt refreshed. She shook off her sleepiness and walked to the door, scratching her head all the way. Outside the door stood a town guard and the way he tapped his foot impatiently and the sudden look of relief on his face made Margaret pay closer attention to him.

“Good morning ma’am.” He said as he removed his helm. “I am from the Clover Town Guard. Are you familiar with…” The guard began to explain the situation. There had been reports of weird reports in the sewers and when they were sent to investigate they were attacked by a weird creature. It was 20 feet long and had hundreds of teeth. It could breathe fire and shoot lasers from its eyes. It also looked a lot like a goldfish, if a goldfish could turn into a fire breathing, laser shooting monstrosity. The guard pleaded with her, asking for her help.

“Okay I’ll help. Now get out, I’m going to change clothes.” Margaret said, ushering the guard out before shutting the door and switching clothes. She dashed out of the room two minutes later, hair neatly straightened but not by much and clothes ruffled in so many different places. The guard led her to a decent gathering of other guards near the manhole. “You have lead ma’am, we don’t know how to deal with this.”

Something in Margaret’s eyes suddenly glinted. “Maintain the perimeter. I’ll fight this thing in the sewers to try and avoid any damage top side. Do not run in while I’m fighting it, no matter how loud it gets stay and watch. Do not get in my way. Spread the word out to your fellow guards.” The guard nodded and began to spread the word. Once the orders were spread they began to back away from the manhole and set up a barricade a good distance from it. Margaret used her flight and began her descent down to the sewers.

She silently navigated the sewers of Clover Town her flight allowed her to hover off of the ground and move quietly as long as she moved slowly. She moved about the sewers looking for the monster until she found it. It was marching away from her in a tight space. Seeing an opportune moment to attack, Margaret began her assault on the alarming anchovy. She quietly approached the fish, careful not to make any sudden noises. “Gust!” She shouted before the circle appeared and shattered. A powerful gust of wind gushed point blank into the monster, blowing it into further down the passage way. The monster recovered quickly and pursued her through the narrow tunnel. “Flame Explosion!” She shouted, placing the a few steps in front of it before backing off. Fire bloomed in the tunnel just as the fish was over it, catching it dead centre in the flame. The burning monster became mad at Margaret and began to chase her further into the sewer. “Severe Rainstorm!” Rain poured in the sewers as Margaret flew for her life with the monster snapping its jaws behind her. The monster got caught in the rain and began to take damage. Red beams of light shot out of its eyes and were aiming for Margaret. She swerved around the corner, singing her arm with the beams, and waited for it to come closer. “Aftershock.” She whispered, casting her earth spell and following her cycle of elements. So far she had done so properly, from wind to fire to water to earth. Lightning was next. She made her way out of the sewers via the manhole and waited. The monster caught up to her and snarled trying to get to her. She held her singed arm as she called out her next spell. “Cover your ears guys!” She warned. “Thunder Hammer!” Lightning shot through the manhole and scored a direct hit, thunder followed and stunned the fish monster in place.