The Exorcism [Kirahunter and Anastasia Job]

Re: The Exorcism [Kirahunter and Anastasia Job]

Simon let himself relax a bit when he saw the Myrmidon descend from the sky. The ship was rapidly becoming a sight for sore eyes. He had been resting, sitting on a large rock nearby, when the ship came down. The short reprieve had left him feeling a bit better but the long day was definitely wearing on him. Too many close calls, and far too much strain on his body were tugging down on his permanent smile. But things were looking up now that Anastasia was back with the remaining shards, they could finally get this curse lifted and go home. Something the speedster was definitely looking forward too. It'd been just one mission after the other, and his last one hadn't been any easier. Even if it had a nice reward at the end... Simon shook himself from his reflection and walked over to the ship as it landed.

He reached the table just as Talyia slammed her loot on it. Simon couldn't stop himself from glancing away from Talyia's flattering greeting. Even in mortal peril he could still be embarrassed. But there wasn't any time for that; almost as soon as Talyia had finished talking the newly repaired containment chest instantly burst open with billowing smoke. The blade reformed and from swirling darkness came what could only be the demon of the sword. In a flash it executed the nearby Rune Knights, Simon grimaced in surprise. Any other day he could've stopped the attack, but his fatigue was having a very real impact on him. Better late then never Simon rushed in with his super speed launching a volley of kicks at the demon, but they were casually deflected with the blunt of his blade and Simon was forced to jump back. "Tch my legs just aren't listening to me..."

Conveniently it seemed his job partner had just the thing for that. Magically rejuvenated from her magic shout, and just a bit excited by her cool speech Simon dashed back into things. His body greatly relieved moved like a blur as it had before, now as Simon led with a high jump he easily connected. His boot satisfactorily crunched into the man's face sending him reeling backwards. He taunted him yelling, "Hey hey! Eyes on me tall dark and brooding! You're primary threat is right here!" Then with that he was right back at it with a barrage of quick kicks in an attempt to overwhelm his demonic foe. Simon's sudden speed boost from Sigmund's Courage had thrown the demon off guard letting Simon land a few scathing blows. But this enemy was no push-over, as soon as they adjusted to Simon's new speed they were counting his incoming blows just as before.

It was a rapid exchange of basic attacks from both parties, neither landing anything substantial, but one mistake from either of them would change that. Despite dozens of blows being traded the entire exchange only lasted a second before a mistake was made. That mistake seemed to come on Simon's end, he went too far in with a round house kick that was easily side stepped. The kick was too wide and Simon couldn't recover in time. Taking the opportunity the blade demon brought his blade down on Simon's head in a cruel two handed slash. But it didn't go quite right as the blade harmlessly passed through Simon as he magically converted his body into magma. The sword went straight through his fluid body burying itself in the ground below Simon's feet. It should have only taken a moment for the swordsmen to pull it free but he didn't have that moment as Simon took the chance to bear hug him with his molten form.

Re: The Exorcism [Kirahunter and Anastasia Job]

Tag
Words:  1242
Total:  Over / 20,000
The Monster
Finally Shows it's Face
Simon softened up the big, brooding bad-guy.
"You ready, Taliya?"  Anastasia asked as she watched Simon lay the smack-down upon the big and brooding demon.  With lashes from his God Legs and exploding into Lava, that didn't seem like a very pleasant affair.  That Simon is definitely not one to mess about with.  A former Wizard Saint and Guild Master of Fairy Tail had finally displayed his power, leaving Anastasia in complete awe.

"Of course!  Let's beat this guy to a pulp!  You have a contract to make with this guy after all, right?"  Taliya asked before raising her hands up into the sky.  A beam of sunlight covered Anastasia, slowly melting away some of the pain from the shard's death magic.  As Taliya raised her hands into the air, her body became enveloped by fire and in a blur.  Taliya waited for the most opportune time to strike, just after Simon finished his assault before he charged at the final boss, slamming her body into the man.  After her flaming body slammed into him, she recoiled backwards, falling onto her rear end with the feeling of dizziness stressing her body.

"Looks like you'll have to sit this one out, Taliya," she said as she took a stance.  Without saying anything else, she sent out one of her dragon fangs towards the man only for him to skillfully dodge her attack.  She sent out the other hand only for him to quickly dodge that one, using the arm sent as a platform to run on towards the now vulnerable armor.  Ana's arms began to retract, not being able to keep up with the man's speed.  She calculated how fast the arms were retracting and the man's movements.  With a quick and calculated movement, Anastasia engaged her suit's Flash Step, appearing on the other side of the man and meeting up with the Dragon Fangs, finally retracting them.

The opponent slowly floated down onto his feet, swinging his sword out in a display of power.  Before another word was said, the man quickly moved towards Anastasia and swung her sword, only for Anastasia to parry it with her dragon fangs.  She counterattacked with a strike of her own only for the man to move his weapon to parry the right arm.  Now that the left arm is free, Anastasia struck out with the left arm for the man to position his massive blade to block the attack.  However, he blocked the attack as if blocking the mouth of a dragon with his blade.

"Gotcha," Anastasia stated as a large amount of energy built up within the dragon fang released a burst of magic directly at the enemy, dousing him.  This caused the man to recoil backwards a bit before Anastasia started to pummel the enemy with her fangs.  The target stopped moving after her assault.  Clearing her throat, she turned to look around.  Was it over?  No.

The man slowly got back up to his feet and without hesitation, went on his own assault.  The blade of his weapon flashed in a flurry of steel at Anastasia's armor and weapons causing an explosion, shooting Anastasia back.  "Do you think something like that would take me down, little girl?" the man stated with the same smirk upon his face.

The man started to slowly walk over to Anastasia, as if, to make the final blow.  Taliya responded to go save Anastasia only for a single hand to be raised in her direction, throwing her back.  The man stood directly above Anastasia and raised his blade up with the intent of plunging the tip of his blade deep into her chest.  "It was fun," the man said before lowering his blade.  His blade was stopped by what felt like a wall.  A wall of energy emitted from Anastasia before a strange blue aura began to cover Anastasia and changing her physical features. 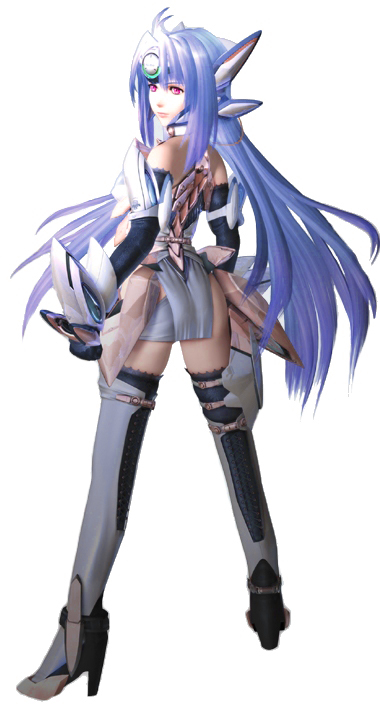 It has been a while, but Anastasia's cursed blood activated.  This caused her hair to lengthen and turn a silverish blue color and her eyes to change to a very brilliant blue.  Her outfit changed to something completely foreign.  Anastasia pulled herself up, staring into the silver-haired man's eyes.  She held her hand out forcing a massive spear to appear in her left hand.  The spear appeared to be a spiral shape; as if it could pierce the heavens.

"What's this?  Interesting," the man asked rhetorically before taking a stance.  "It seems I have to take you a bit more seriously now."  As a reply, Anastasia pointed the spiraled lance towards the man and took the offensive.  She lashed out with the lance, swinging it around as if it weighed nearly nothing.  She applied pressure upon the boss, forcing him to go on the defensive, blocking every attack performed by Anastasia.  Any offense that he could mount upon Anastasia was quickly blocked when the lance changed to a shield to completely soak up the attacks.  Figuring he could use the transformation to his benefit, he performed a feint forcing anastasia to change her weapon to a shield before changing the direction of his strike.  Foreseeing this attack, Anastasia blocked this attack and shouted "Su Grah Dun!" causing thunder to come from her lips and a ball of lightning to come from her voice.  The ball of lightning struck the man in the face before quickly changing her shield back into the lance and plunged it into the man's chest.

Blood came from the man's lips as he coughed.  A grin came from his bloodied lips.  "You win this time, little girl," he said before his body began to evaporate.  However, before the soul was able to escape, Anastasia reached up and grabbed it, leaving only the spirit of the creature in her hand.  "I will give you a choice; one that I feel you cannot refuse.  Fight for me when I need you or completely cease to exist.  You get one more chance to fight as you were when we just fought," she gave him an ultimatum.

"Then you will be completely erased.  All mention of you will be removed from history; as if you never existed in the first place," she said.  Sure, the last thing she mentioned was a complete bluff, but it wasn't something a soul would take lightly.  Everyone wants to leave their own legacy, regardless of how wicked of a legacy it was.

"Very well, consider me at your service," the spirit of the man said before ascending upwards with Anastasia finally letting him go to ascend to Valhalla.  After the contract was made Anastasia reverted to her original appearance.  She turned to look towards the Rune Knights that had fallen when that abomination was summoned.  It was also at this time that Taliya finally woke up.

"Lemme at him!  Lemme at him!" Taliya said as Anastasia simply smiled at her.  "We have one last part of the job to do, Taliya.  We need to take these bodies back to the Rune Knights so they can be with their families," she said before turning to look towards Simon with a smile.

"Thank you for all of your help.  I couldn't have done this without you, Simon," she said with a bow.  "It was an honor.  Perhaps we can do this again some other time, hm?" she asked before clearing her throat and moving her way back towards the boat called the SS Myrmidon.