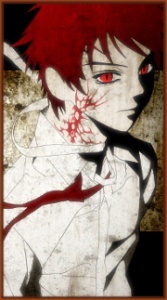 Minoru was on his bike about, meh two miles back from where he was now when he fell down. This was after riding for about ten. He was going to be late!! Minoru caught up to his partner now after running two miles.*Panting*. "Sorry Feitan I am a bit late, Some idiots in hoods(hint to event) were running around like a cult and acting all weird and such. The length was like a train size  and so it took a long time to get to here, with a few other stoppers like falling off my bike tripping on some stones and more". Minoru knelt down a bit to look around and remembered the rest of his stupid journey. It all started with a poster."here it is  a new option for fun come and see the one, the only, the.... hiring now" this of course had big cash and just enough to pay for his boat taxation. THis boat in truth fit for the amount of members currently in his guild and should invite them to stay the next thing he was going to say, but that came later the first thing he had to do was finish the story he had remembered in his head so he could catch up with himself. And so after the poster he had ended up being told the way by a mailman mage named... meh the name for minoru's aquanites was always Shit or chump, chump fit this nice man who was about in his teens. So he followed the man around and he ended up leading back to talonia to take a break on the way, where he met his new found brother. After Minoru ended up following the man on bike and now about half way there. the man gave minoru a map and then left to do his job. Minoru was now finally here and was ready to preform. Or was he, in fact all he could do was get angry, but maybe his rants would be funny. Minoru had yet to know if he would do well on this most ridiculous job that was yet to be had and maybe on the way he would get to know feitan better, and that could higher him in the stupid so called ranks of the guild. Why could Minoru not just "be the very best the best there ever was". He would get up his rank though eventually. He just knew he could get up there. He although hated following the orders of the scums that lead here, although he would not tell Feitan that. Feitan probably knew that by now. Feitan was the top dog here, but he would not let that other man get as high as him. The stupid idiot that man was Zaltac Nivalis. That man was so rude Minoru could puke."Feitan you know Zaltac, what is your opinion on him, to me he seems like human dung to me although my anger seems to make me think of others less then I should? Feitan, I was also wondering what is haruhi like, she does not reveal any personality to the rest of us"?Minoru thought about it himself. Minoru had thoughts of idiots bugging him in his sleep all the time, he just needed some joy now. Minoru hoped he could get some with feitan.
_____________________________________________________________________________________

Feitan glanced over at Minoru shrugging lightly "you aren't late. After all we still have time to get there and perform apparently. I am afraid I'll have to rely on you to get this job complete. I have no sense of humor you see. I don't tell jokes, or really get the whole concept. So you'll have to do it." As the pair of them walked however Feitan seemed to be on edge as ever. He was looking around with only his eyes not turning his head in order to disguise what he was doing after all it wouldn't do any good if someone noticed he was looking around and keeping himself sharp.

As they walked Minoru asked some very interesting questions. He sighed softly shaking his head "To be honest the only opinion I have of him is that he must be powerful to walk around and be arrogant like he is. Personally, i find such traits befitting those with magic. Remember we are the superior people in this world, and those without magic are simply the sheep we wolves feed on. As for Mistress Haruhi...she is incredibly powerful. I speak as a first hand witness to her amazing power. You would do well to remember that with her age comes a certain disregard for the rules, traditions, and she is prone to mood swings. You'd best keep well on your behavior with her. Or it may be the end of you. I hear tell that Haruhi killed a puppy without a single thought on it. Still she promised me money, and the ability to use my magic. That's all I need to follow someone who is stronger than I. My opinion on you is that you are hot headed, but you have potential. Don't let your temper get in the way of that."