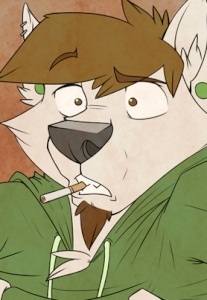 It was quite a lovely day in Magnolia, not that Daniel would really know. He was sitting in a comedy club, sitting on one of the front row seats, enjoying the velvet cushion under his rear. Dan decided to take a break a bit from doing jobs; they had really begun to tire him honestly. Chasing dogs, teaching kids to swim, training recruits, it was all really draining.
He had ground to love the town of Magnolia, its friendly people, and lovely atmosphere. He spent a lot of time here really and just when he thought the town couldn’t get any better, he found the comedy club, nestled neatly near the center of town. Earlier this morning he diced to try it out, see if anyone could make him laugh. Daniel loved a good laugh, and looked forward to maybe making some friends here.
But it happened to be a pipe dream, as onto the stage walked a tidy looking man with a suit on. “I’m, uh, very sorry to say our comedian is sick and can’t proceed with the performance. We’re asking that anyone at all with some comedy sense would come up here and get the laughs going.” Daniel squinted at the man. No comedian? Damn that sucks. No-one was standing up, and the entire room started feeling a bit awkward. “Then you’ll receive a refund at the entra-“
Daniel stood up and cut him off, smiling wide. “Wait! I’ll try some comedy, there people came here for a good time right?” The room made quiet sounds of agreement and there was a light applause as Daniel climbed up onto the lit stage. A red hue was plastered onto the wolf-man’s cheeks. Oh god, I don’t think I can really do this. “And your name sir?!” The man in the suit was smiling wide, looking like the most relieved man in the world at that moment.
“Daniel, you can call me Dan. Most people call me mutt though.” He wasn’t even being funny, it was true, but there was light chuckling from the audience. The man nodded and went backstage, cheering quietly and pumping his fist. Probably because he didn’t have to give out refunds. Dan turned to face the crowd of people, sitting, smiling, expecting some sort of entertainment.
Well, they laughed at me calling myself a mutt.. So maybe that’s the key to the jokes. “So I was in the tavern the other day, drinking a large pint of brandy, when this big burly guy busts in and gets right up in my face.” Daniel smiled and started pacing the stage slowly, telling the story. “He says, ‘You no-good, son of a bitch!’ and I aptly reply,” Daniel paused for effect, “Why yes, I am.”
This got quite a few laughs, and it made Daniel chuckle a bit himself. “Let’s just say, he didn’t like my humor as much as you guys did.” He was half-laughing while he was talking. He was really enjoying this now. “Now, I’m gonna try and stay away from the jokes: Why did the dog cross the road?” There were a few confused looks in the audience. “To get to the barking lot.” Groans and stupid smiles ripped across the audience.
“Yeah, those are bad, but you’ll find I have a few more puns up my sleeve.” The audience was eye rolling and making light chuckles. “So, after this little bar scrap with this big tough dude, the guards were called and they split us up.” Daniel stood tall and acted with authority while speaking. “’People are saying you started the fight, you know.’ And I was quick to respond of course. ‘What? Officer, that’s.. im’paws’ible!’” Daniel threw up his hands, which looked much like paws, and emphasized the bad pun for effect.
There were chuckles and one guy in the back busted out laughing. He stood up and shouted to Daniel. “Dude! I just realized who you are. You were that guy who came off the train covered in candy and your face was all messy and gross looking!” Daniel blushed a bit harder, then quickly tried to fix the situation by shrugging, and making his voice small. “I thought I was starting the new style.” He then spread his arms wide, motioning to the crowd. “Nuntius dulcia lupum! It would be all the rage with the teenagers, you know?”
The crowd laughed and the guy in the back sat back down, seemingly satisfied with the answer. Daniel thought a bit before the next one, smiling and strolling along the stage. “You know, all of us in here are funny, not just me. So why didn’t anyone stand up? I think it’s because you all are scared.” Daniel smirked, “I’m just twisting your underpants guys, I can see that big dude in the back, he’s probably thinking, ‘I remember you, you’re the son of a bitch from the bar!’” And with that, Daniel did a sweeping bow, “Why yes, yes I am.”
The crowd busted out laughing, all looking for some big burly dude in the back of the audience. Daniel walked off the stage. “Thank you everyone!” The man in a tie stopped Daniel before he reached the door and handed him a sack of gems. “Thanks a bunch Daniel, that’s a refund and payment for the routine.” It was only a 45 minute routine, but people were laughing and having a good time, so Daniel was happy. He took the money, nodded, and proceeded on his way, feeling warm and satisfied.
« View previous topic · View next topic »