Where are the Knights? 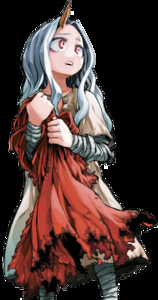 Where are the Knights?

Coco would be walking down the street humming to herself carrying a package that she was sent to deliver.  A job she picked up from Sabertooth and one of her first on her own.  Being a Sabertooth mage is something that she took seriously and was determined to do well at.  Though that look of seriousness could be mistaken as cute as that's what it looked like to everyone watching her as she marched through the capital streets with her small package under her arm.  As she would wander through the streets her biggest weakness became apparent.  She had no clue where she was.  Normally she would make a portal but she needs to ether see where she is going or have been there before and none of those options were available to her.  She could go home and ask...but she wanted to do this job by herself...or without someone from Sabertooth.   She had to do something that take all her strength...ask for directions.  With that being said he walked up to A younger looking man, figuring head be easier talk to.  She took a deep breath walking up behind him tugging on hid shirt looking up at him.  A serious look on her face...seriously adorable at least.

Excuse me mister, I am a Sabertooth mage. I need directions to the....

She paused reaching into her red back pulling out a piece of paper, the request flyer.  She suited reading it for a moment more trying to reading yo herself forgetting the taller man for a second.

Rune Knight Headquarters, to deliver this package to there secretary at the front desk.

She said as she then stuffed the paper back into her little red bag smiling a little bit more again.  She was proud of herself.  In her mind she just flawlessly asked for directions from a stranger.  She was growing up fast.  However she tilted her head.  What if he didn't know the location...the next worst case scenario.

Um, do you know where that is,  can you help me?

She asked with less confidence then before but it was still there.   She was a certified Sabertooth mage now,  she had nothing to be worried about, however she was just hoping this man could help her. Private Fontaine was had just finished his patrol and was headed back to home base, it was quite an uneventful day for the rookie rune knight. Fin actually was glad, there was nothing crazy going on, after all the last few months was nothing but crazy. The ginger haired mage recalled the long list of missions he had gone through, after dealing with terrorists, drug cartels, and murder mysteries the Seventite wanderer was relieved today was seemingly mundane. Peace was a far better alternative to the violence and cruelty he had to wade through when doing his job. To celebrate the day, Fontaine had decided to visit a local pastry shop that had garnered some fame, he had heard form a coworker that the shop sold amazing desserts so he had decided to buy some cookies and cake to share with his colleagues upon his return. As he was heading back, Finnegan's attention was taken by voice of a small child. The young man turned to see a young girl with white hair and crimson red eyes. However, the girls most notable trait was the small horn on her forehead. Fin raised his eyebrows curiously, as he donned a warm smile and knelt down to look at the kid at eye level.

"Top of the mornin' to ya lass." Fin would watch the child pull out a request flyer. The little lady read the parameters of her mission and Fin nodded indicating he was listening and he understood the intent of the child. "I see, fairy play to you lass, aye! I do know where the Head Quarters is. After I'm a Rune Knight me self hahaha." Fin laughed as he showed the little girl his badge. "Aye! I can can help ya get there, I'm on me way there right now." Fin said as he stood back up, he tucked away his badge in the inner portion of his coat pocket. "Me names Finnegan Fontaine, but feel free to just me Fin. What might your name be little lady?" Fin inquired his tone and accent sing song in nature, a clear indication that he originated from the country known as Seven. Coco felt incredibly lucky. Not only did she nail talking to him but she found an actual Rune Knight to help her. She smiled at the man that had called himself Finn. The man in front of her seemed to be a cheerful man however she did have to wonder something that's made her tilt her head and scratch slightly. She didn't send why the man talked so funny. Not having any idea what an accent was or Where he was found to her he was just talking funny. It made her smile and laugh a little bit though at the end of the day as she then returned to the task at hand she understood what he said despite his funny words.

Thank you Mister Finn, my names Coco. I'll follow you then!

She looked up at him giving a bright l, cheery, child like smile as she would follow wherever her went. She didn't know what to to ask the man, just being glad she didn't have to pronounce his name. Finn was much easier then his actual name of Finnegan. She could say it but she liked Finn better anyway. The only question she had was why he talked funny but he instincts said that would be a bad way to ask the question. Focusing hard she didn't wanna walk in silence. She pondered for a moment before speaking. Her goal wasn't to offend the man, she just needed to know before anything else.

Mr. Finn, um can I ask where your from, I never hear...someone talk like you before.

She hoped that didn't come off as rude or anything she was just genuinely curious. As they walked she would wait and listen just happy to be lead by this older man to there destination. She looked up at him hoping she did good. She had been practicing being better at talking with people at Sabertooth. She didn't lack the skill just the practice of it all and the el Etiquette. She didn't know whatelse to ask the man though even though there were far better questions then ones regarding his accent. At leader not till this was solved.

Fin had started to lead the way, making sure his strides were shorter and slower to allow the child to walk at a comfortable pace. "Coco! Fine name Las, Fine name that it is." Fin nodded in approval as looked down at his new small companion. "No need to be callin' me mister, I ain't the time for formalities. No need to be stiff with me lass. Hahaha." Private Fontaine chuckled as he sauntered through the streets, hands in his pocket. A quite few locals saw Fin and eagerly waved at him, and the friendly rune knight waved back shooting them his signature sunny smile. Finnegan had grown a decent following, not to the point where he was hampered by paparazzi. But the young man had earned the trust and hearts of hand full of people during his patrols, he would often stop and help shop keepers bring in some supplies, other times he had helped parents find their lost children, climbing a tree to save a little girls cat, and other times it was Fin simply helping the elderly cross the street. So it was only natural for those he had helped in the past to be happy and eager to see him patrol the streets.

"Hmmm me accent... As a child I grew up in the Emerald Isle, a country called Seven. Like the lucky number seven!" Finnegan chuckled as he held up seven fingers, before putting them back into his pocket. "Aye... me homeland... I've been to many a places before ya know lass, traveled quite a lot. But the cadence of me motherland has never left me tongue. Hahahahaha!" Private Fontaine laughed. He paused for a moment, and swung his bag off his shoulder, rummaged through it while he walked. Eventually he pulled out two cookies, handing them both to young sabertooth member. He would zip up his bag and swing it back on his shoulder and continued on his merry way along side coco. "Help yourself to them cookies lass, I've got plenty." Fin smiled. "What about you? Where are you from?" Fin inquired.

She thought about it really hard as she never heard of that place before or even that expression before. Was seven a lucky number, what made a number lucky for that matter. Furthermore why wound people talk differently in different places, was it a distance thing or were people just strange. So many questions flooded the girls head. Her child like curiosity peaked. She might have bombarded the young man with questions if she wasn't distracted now. Finn had produced two cookies for Coco offering them to her, the man knew her weakness...Sweets.

Shecsaid taking them taking a big bit of the cookie letting the sweet tasty sensation wash over her. It was marvelous. As she ate the cookie she suddenly liked this man more especially when she was told to help herself. This was all good till he asked where she was from, suddenly she stopped eating and her paced slowed. How did she answer this question. She didn't know. She paused trembling a second before taking a deep breath. She was a brave Sabertooth mage now and she was with a Rune Knight, she felt safe... she was safe. She kept walking wanting to be careful explaining it.

I um...I'm from a small town two days outside of Hargeon...but after the monster rampaged through....I had to move to the Ace of Spades and I live there with the Sabertooth guild now...

She said as all curiosity left her and while trying to put on a brave face smiling s bit still since she was happy with Sabertooth, but behind the facade there was sadness and tears she was holding back as memories of Kalama flooded through her head. She wish Victoria or Vitria was here she wanted her big sisters here for support. But they weren't she would just have to finish the job. She took another bite of the cookie to try to cheer up. She didn't know what to do or ask the man now.