Kaito was never much one for high society events, but attending these things was an unfortunate part of being rich. He hadn’t paid too much attention to what the occasion was, all of these grand parties were the same, but he assumed it was another charity fundraiser or something similar. If these people really cared, they’d give their fortune to help the causes they threw these parties for, but that was besides the point. They’d never actually do that, for all that they gave “generous donations.”

Personally, Kaito thought that actually getting their hands dirty and participating in actual charity work would do most of these snobs some good. Most had never worked a day in their lives. He’d probably give away his entire fortune to see the people here work like ordinary people.

Seated at his assigned table with a few strangers, Kaito idly wondered if anybody here actually cared about these things. Some of the people here looked ready to fall asleep in boredom, and dinner hadn’t even been served, yet! Not that he disagreed, these things were always mind-numbingly boring, but he at least could pretend to be interested in the events around him. Really, though, his goal was the wine being served. Maybe if he was drunk enough, he’d forget the annoying chatter of some of his assigned tablemates. Did they know nothing of subtlety? They were just bragging about their companies to anybody who would listen.

Sighing, he took a look at one of the few who had yet to do so. If the other caught his eye, he’d make a pointed rude gesture behind the backs of the braggers, his gaze pointed enough to show exactly who the gesture was meant for. “Good god, do you idiots ever shut up? Nobody here cares about the companies you inherited from your daddies and are probably running into the ground. If you’re going to brag, at least be subtle about it.”

He hoped the other guy was as frustrated as he was. Idiots always left a bad taste in his mouth. 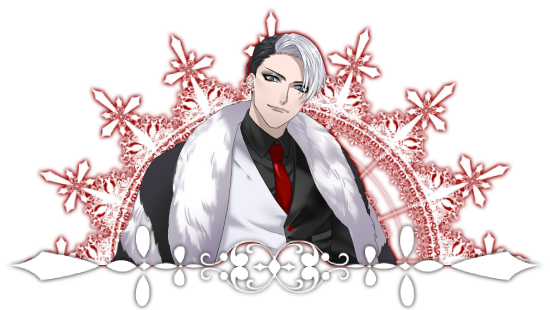 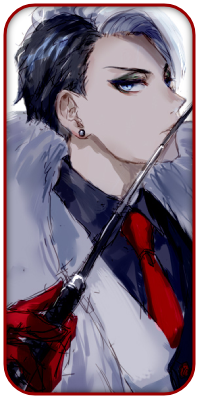 As much of a pain as these ‘high society events’ could be, Valéry found them to be rather beneficial to his business. He smirked into his glass of water as he softly closed his eyes, his other hand reaching down to the top of the head of a beautiful female dalmatian dog lying beneath his chair nearly like a statue. Her leash was clasped to her red rhinestone collar, resting on the ground besides her, proving that she was an obediently trained dog. The black and white haired man himself wore a red vest over a black button up long sleeved shirt, a pair of nice black slacks, and a pair of black oxford shoes. Over his shoulders was a nice jacket that nearly blended in with his shirt if not for the red insides that peeked out when he moved his arms to expose the jacket more. His hands sported a pair of red gloves that barely touched the bottom of the palm of his hands as well.

His pale blue eyes opened softly as he felt eyes on him, and he cocked a black eyebrow up towards the man spying over at him. He smirked a little as he moved enough to motion that he found the gesture he made to be funny, shrugging his shoulders in the end. He clicked his fingers and the dog sitting under his chair lifted her ears as she waited for him to move. He stood up and picked up his chair, bringing it closer to the man who was talking a moment ago.

“Apologies if my sudden move makes you uncomfortable, but I felt you might be a delightful company compared to the rest of these fine people.” He smiled sweetly as his dog placed herself under his chair like she had been before. A few eyes had been on him and he simply flashed a smile to the people staring at him, showing his teeth and the slightly sharp canines he had. That devilish smile he had had them blushing and looking away from him before he turned his slightly bored gaze back to the man before speaking in a soft, husky voice; “I am quite interested in how you yourself are subtle about bragging.” He smirks as he lightly pulls up the sleeves of his shirt, exposing his right wrist to be bare, but his left one to be adorned with a high end watch with a red strap around his wrist.

In all honesty, Valéry was testing the waters of this new person he hadn’t met yet before one of the ‘rich daddies idiot sons’ came up to him asking about his collection again. This new person could very much become a new customer as well, but he wouldn’t egg it if they didn’t seem like they were even slightly interested.