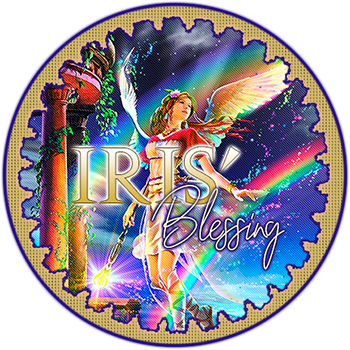 Slayer Can Control (Elements the Slayer can use in spells):
Rain, Colors, Gold


History:
Back in the time of gods and goddesses, everyone knew the big names. Zeus, Poseidon, Hades, Ares, etc. They were such a big deal that everyone forgot about all the minor gods, goddesses, and demigods. Treated them as if they didn't matter, as if they didn't have a big impact on the world. Well, such "minor" deities got tired of this treatment. They decided to band together to undermine the power of the "major" ones. Led by the messenger of the gods, Iris, they all took the essence of their power and gave it to humans. With this magic, the humans would be able to challenge the gods and maybe take them down someday.

Iris herself was the goddess of rainbows beyond just being a messenger. She was the one who spanned sea and sky to connect the water and air with a burst of color. Iris was the relief that came after a storm. She was beautiful and revered by sea-goers but seen as just a messenger to the gods. The rainbow goddess was the first to create a lacrima from her power and give it to the humans. It was created in the form of an iridescent coin to resemble the way she was called upon to transfer a message.

Lineage:
Blessing of Apollo
Apollo, god of healing, poetry, music, and the sun. His blessing enables descendants of the young mage to gain a user-ranked passive buff to their HP pool (up to a maximum of S).

Blessing of Asclepius
Asclepius, son of Apollo and the god of medicine in mythology. His blessing was healing focused, granting a 50% buff to base healing from spells, but sacrificing 50% spell speed.

Blessing of Athena
Athena, the goddess of wisdom, and a ferocious warrior goddess herself. Her blessing allows descendants of the young mage to naturally recover 5% of their total MP pool per post.

Blessing of Hades
Hades, lord of the underworld, and god of all the riches beneath the earth. The blessing of the underworld’s lord enables descendants of the young mage to have unusual luck with wealth. User gains a 100% increase to jewel rewards gained from jobs.

Blessing of Poseidon
Poseidon, lord of the sea, creator of horses. Poseidon’s blessing to the mage and his descendants enables the user to create and use a horse-based companion in combat. This companion functions as an Ethereal grade pet, and must be created and approved as any other pet.

Blessing of Zeus
Zeus, the lord of the skies, god of thunder and lightning, and king of the gods. His blessing was unusual among the blessings granted by the gods, but no less powerful. This blessing gives the user a user-ranked passive buff to player movement speed (up to a maximum of S)

Description:
Iris’ Blessing God Slayer magic is a special slayer magic granted to Takumi via a Lacrima. Controlling the elements of rain, colors, and gold, the shimmering spells utilized by this magic are often supportive in nature, rather than hard-hitting damage type spells. Often lit up in soft yellow-gold shades or jewel-like rainbow tones, each spell utilized holds the slightest afterimage of a rainbow trailing behind it. Takumi prefers to use this in the intended supportive way, utilizing defensive or healing aspects of this magic most often. The Lacrima that grants the magic itself is an iridescent coin, as a reference to the way Iris herself sends messages.

Unique Abilities:
Telepathy:
Iris is the messenger goddess as well as the rainbow goddess, and with her powers comes a new form of communication. Takumi can communicate telepathically with any being he so chooses to, but cannot see their thoughts without consent, only gaining a vague sense of emotion from anything they might think at him as well as project his own desired words into their mind. This ability requires permission to use on PCs and their pets.
Ability 2:
Locked until B Rank
Ability 3:
Locked until S Rank

Prismatic Shield (Advanced):
Name: Prismatic Shield
Rank: C+
MP Cost: 45
Category: Defensive
Type: Single Target
Durability: 270
Range: Self
Speed: Self
Duration: Up to 6 Posts
Downside: N/A
Description: The user brings their hands together in front of them, producing a shimmering rainbow shield just tall and wide enough to cover themselves. This shield possesses just enough durability to protect from up to three spells of the same rank.

Corrosive Rain (Advanced):
Name: Corrosive Rain
Rank: C+
MP Cost: 45
Category: Offensive
Type: AoE/DoT
Damage: 22 per post
Range: 90m
Speed: 23m/s
Duration: 5 posts
Downside: N/A
Description: Colorful clouds begin to gather over the user’s head, spiraling outwards and leaving them in a clear patch in the center. Rain then begins to fall, in all the colors of the rainbow and dealing small but steady damage to anybody caught within the range over the spell’s duration. This spell also causes a user-ranked debuff to movement speed for anybody hit by the rain, including the user should they venture out of their clear area.

Golden Care (Signature Spell):
Name: Golden Care
Rank: C
MP Cost: N/A
Category: Supportive
Type: Burst
Healing: 30
Range: 30m
Speed: 30m/s
Duration: 1 post
Downside: N/A
Description: A golden curtain of light bursts out from the user to cover a total radius of 30m, healing the user and any allies within range for a small amount of HP. The faintest hints of rainbows can be seen sparkling within the light, if one looks closely.

Goldwhip (Advanced, Lineage Spell):
Name: Goldwhip
Rank: D+
MP Cost: 30
Category: Offensive
Type: Single Target
Damage: 60
Range: 90m
Speed: 90m/s
Duration: 1 Post
Downside: N/A
Description: A long whip made of pure gold appears in the user’s hand, able to lengthen or shorten automatically to strike a single target once within it’s maximum range. The user may choose to wrap it around an opponent or a limb of an opponent for an immobilization effect, which requires OOC permission to be used on PCs.

Rainbow Veil:
Name: Rainbow Veil
Rank: C
MP Cost: 30
Category: Auxiliary
Type: Multi-Target
Damage: N/A
Range: 90m
Speed: 33m/s
Duration: 5 posts
Downside: N/A
Description: The user, by aiming at their allies and keeping them in their line of sight, creates a shroud of rainbow-coloured energy around each of their targets. This then grants a temporary user ranked buff to movement speed. (At C, this is 55%.) The maximum amount of targets is 5, and the spell will not directly buff the user themself unless specified.

Gold Armour:
Name: Gold Armour
Rank: C
MP Cost: 30
Category: Defensive
Type: Single Target
Durability: 180
Range: Self
Speed: 60m/s
Duration: 5 posts
Downside: N/A
Description: After gathering their mana, the user forms a simple armour made of pure gold around themselves. While this armour is active, the user’s movement speed is reduced by 50%, but their melee damage is in turn buffed by 50%. However, this armour shatters the moment it takes it’s durability in damage, returning the user’s stats to normal.

Goldfall:
Name: Goldfall
Rank: C
MP Cost: 30
Category: Offensive
Type: Burst
Damage: 60
Range: 30m
Speed: 60m/s
Duration: 1 Post
Downside: N/A
Description: The user summons a rain of gold in the shape of raindrops, about half the width of it’s max range to strike any opponents directly in front of them and do damage. Anybody struck by this spell will receive a C rank debuff to movement speed for one post, including allies.