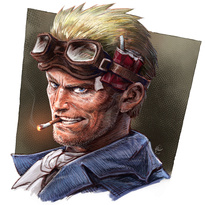 Valentri shot up from his booth and quickly glanced around the cart. “Where are we?!” He leaned toward the window to look outside and watch as the train sped up. “Oh, damn it. You were s’posed to wake me up before the train left, not after!” Slamming his fist onto the table, he groaned. “That’s what I get for payin’ a runt to do a job right.”

Again, he looked out the window. Narrowing his eyes, he suddenly realized that maybe… just maybe, he was wrong. The sun was still high in the sky. Was his timing off? No, surely not. His clocks were never wrong.

“Then, we didn’t pass Fairy Tail! Or… or… wait… no.” He ran ideas through his head. What went wrong? Clearly the timing was off, but how? Did he misjudge? Did his clock stop working? Did he take into account that the kid clearly couldn’t tell time?

“Whatever. Here’s your pay. Wake me up when we reach Oak Town, will ya? That’s not as bad a stop, either. Just can’t go about getting as good of supplies there, though. I’ll wing it.” He said nonchalantly, seemingly rambling to the kid and anyone else passing through the hallway. Kicking his feet up onto the table, he leaned back to take another short nap. It’d be just another hour or two, he figured.

“SHIT!” Jumping out of the booth in a half daze, he grabbed his bag from the overhead compartment and bolted toward the door. Shoving through people, he made it past them and to the doorway with his bag over his shoulder; seemingly using it as a weapon to help clear the way.

As he rushed through the doorway, he stumbled and fell down the last stair. He landed face-first on the ground with a duffel bag of miscellaneous items on his back, weighing him down and knocking the breath out of him.

He pulled himself up from the ground and dusted himself off as best he could. A look of frustration and embarrassment on his face. “I’m not drunk!” he yelled out to the onlookers. Quickly, he gathered his things and stomped off. “I need a map….Or a guide... or something.”

And so, the hunt for a map of the surrounding area began….
Mercury Arseneault Re: Treasures of Old Re: Treasures of Old

Oak Town. It was a strange place to be, primarily because he was out of his element. Though, there were plenty of other things that caused this little – or big, depending on one’s perception – town to be strange. People were nice and helpful, children didn’t seem to have a care in the world, everyone seemed happy.

Why is that a reason for the town to be weird? Valentri thought to himself as he walked along a sidewalk.

One of the helpful residents had pointed him in the direction of the nearest general goods store where he would hopefully be able to find a map of not only the town, so he could better find his way around this far-too-nice of a place, but also a map of the surrounding areas. Take a left at the … at the what? What monument?

He looked around, confused and lost. There was no monument that he could see. Maybe the directions he got were bunk.

No, definitely not. The homeless man would never lie to him about directions to the general store for some money.

“Excuse me, sir!” Valentri called out to the nearest elderly man he could find. “I’m looking for the general goods store. Would you happen to know where….”

The old man interrupted, “Yessir, if’ns you’d look past yer nose, ya’d see it right in front of ya…” he paused, then muttered, “Ya nimrod…”

And as sure as the sky was blue… hopefully, the goods store was right in front of him. A little down the ways and at the end of the street, but it was certainly in front of him. “Ah, thank you, kind sir! You’re a gentleman and a scholar!”

With a jolt, Valentri meandered along the sidewalk toward the general goods store. Finally, a lead. Things were finally looking up for him! Why dally? He needed that map and fast. “Nothin’ is ‘bout to stop me,” he talked to himself as though he were his own personal audience. Which, in reality, he was.

“What, a girl’s not allowed to walk down a sketchy alley….”

“Nope. Certainly not,” he answered as he walked along the sidewalk, answering the woman who had apparently been hit, but he didn’t realize it. Nor did he realize she wasn’t actually talking to him.

“This here’s quite the bit of tech. Can’t say I’ve ever seen anything like it, not even outta Bosco. Where’d you get it?”

“You bet’cha. Ain’t nobody seen that kind of tech ‘round…” he continued to have that conversation as he crossed over the alleyway and onto the sidewalk.

“That so? You make a lot of stuff like this, then?”

Finally, something sparked his attention. He paused, turned about and looked around the corner into the alleyway, peeking his head around as subtly as possible which wasn’t subtle at all, actually. “Tech? Weapon?” it piqued his interest. Would some woman, getting her ass handed to her, really have the mystically magical item of great importance? Why didn’t she use it? Was it even something worth noting? Probably not.

But he listened intently anyway.

“…Throw her in the car, boys. I think the boss’ll be very interested in our new friend and her work.”

“How unfortunate,” he thought. But someone should.

As unfortunate as it may have been, he knew that he had to do something. Not save the girl, but follow them... or... as dumb as it may be, get captured alongside her. "What's life without adventure?" he asked himself.

Bursting around the corner, he yelled out at them. "Get your hands off my princess!"

Princess? That's the best you could come up with? His mind raced with options. "I mean... my girlfriend! Wait. Are we married?" he asked her as he ran up to the group. He had no weapons, and he was sure to get his ass beat. But, if he could follow along with them, and not be brutally murdered in the process... well, all the more power to him, right?

"Leave my Kitten Doodle alone!" he yelled again. Running at them with all of the rage that a crippled baby tortoise could muster.
« View previous topic · View next topic »

» Vault of Treasures
» ♥Appraising the Treasures♥
» Buried Treasures
» Treasures, Gold and Scorpions?
» On the lookout for a thief of treasures