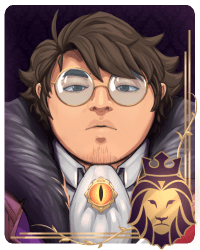 After reminiscing the past on how he became a Rune Knight, he felt a flood of nostalgia flowing through him that he can't help but think back at the day when he was assigned his first mission, which earned him a higher ranking spot than his comrades in arms. It was around this time that he was assigned to perform his duty as a Rune Knight alone with a job befitting a man of his rank. This served as a test for him to see if he truly has what it takes to be a Rune Knight, though that is what he thought at that time. Looking back, it may have only been a regular mission, but a mission he carried out successfully and perfectly nevertheless.

He has been sent to Oak town to carry out an important mission in preventing an elderly from being in harm's way as a bodyguard. He was up to the task, knowing full well of his capabilities both as a swashbuckler and a wizard. Nothing is too big of a task for him, as he believes himself to be what a human beings should aspire to be - perfect, and he does his responsibilities and chores perfectly. Cleaning the dishes? All squeaky clean! Broken vase? Turn it into a masterpiece! It's as if he is capable of literally every skill and trade. Everyone believes him to be flawless, but in reality, he believes himself to be too perfect that he can't make mistakes - a flaw in which he pondered after all this time.

Gripping his Chevalier de Fleur, his rapier, he struts his way into Oak Town to look for a Miss Cooper. He was aptly provided with a photo reference of the individual - an endearingly nice elderly woman who would feed you lots of food regardless of your weight. Who in their right minds would think of harming such innocent and pure creature such as Miss Cooper?

Envy, a sin that brings forth the worst traits of a person. It is through envy that they decided to eliminate the opposition as their method of reaping their rewards. Unthinkable as it is, it is a sound strategy, albeit immoral and cowardly - something that Francois is not. He faces his problems head on with a cool head and with a good moral compass. Perhaps his perfection caused him to win 99% of the time. That, or because of his quick wits and reflexes, things a swashbuckler should have.

Therein lies the problem, however. He has no idea what the assassin would look like nor does he know anything of the individual who sent them. He also has to avoid telling Miss Cooper about the threat. As specified in his job description, the client doesn't want her to find out about the assassination. His uniform definitely raises suspicion, which is why he sought and dressed in his casual attire - purple coat, white buttoned shirt worn underneath his brown vest, a purple ascot, his usual. As much as he'd like to bring his rapier, it would raise even more suspicion not to Miss Cooper, but to the assassin, hence, he brought an ancient wand, one that serves as a medium to cast his spells. Yes, he has thought much of the details of his mission and has prepared himself to execute his duties as a Rune Knight.

Re: The First Task

His vision must be playing tricks on him, and perhaps it is not. "Is that... my brother dearest?" He mumbled to himself as he sees the visage of a man who looks exactly like him, albeit with slightly straighter black hair whose length reaches his neck as opposes to his short auburn brown curly hair. He also had a pair of red eyes as clear as ruby. It is his twin brother, Michael Brooklyn Morgan, who went to become a soldier of the Arch Vorbrundt Order. He was clad in what could only be described as 'something that came out of a sci-fi movie'. This was the first time he has seen his brother in awhile as the soldiers of their order isn't allowed to leave unless they are undergoing a mission or if they go on a paid leave. From the looks of it, he seems to be doing the former. Without hesitation, he walks his way towards his twin.

"Hello, Michael. It has been awhile." His twin brother turns around to see his twin, surprised he isn't in his Rune Knight attire. "Franz? What brings you here? Why aren't you in your uniform?" He says as the two of them exchange hand shakes and slightly awkward but brief hugs between twin siblings. Francois chuckles and retorts, "I suppose you aren't here for vacation?"

"Touche. I was sent on a solo mission to investigate a suspected assassin, unfortunately for you. Wish I could take a long respite from being a soldier. Then again, this is the price we have to pay to protect Fiore, right?"

"Hmm... coincidentally, I was sent as a bodyguard for a sweet lady as an assassin is plotting to kill her." Francois scratches his chin at the perfect timing of events. Then an idea hit him. His magic excels against mages but at his current state, he is not fast enough to apprehend the assassin as he suspected the assassin would lay low and deliver a swift blow against them. Michael's magic in its current state is useable by just anyone, and his training as a soldier has allowed him to be more resilient against attacks, a trait perfect for a bodyguard, which unfortunately, isn't one Francois that was blessed with. "Brother dearest."

"Yes, brother dearest?" Michael responds, grinning, knowing all too well what comes inside his twin's mind, as if they have twin powers.

"Why don't we..." Before Francois could respond, Michael responds by completing his sentence, "Swap places? Sure. How long would it take to change our clothes?" Francois has anticipated Michael's response, knowing how he would respond to his antics, which almost always ends up well with them succeeding in their gimmicks. "About 10 minutes. The old lady won't be leaving until late in the afternoon, anyways."

Re: The First Task

It didn't take long before the siblings finished swapping their clothes, and with the help of a nearby magic barbershop, Michael was able to imitate his brother's appearance. Only a haircut and magic dye helped his hair look more like Francois' - smooth, curly, and a rich auburn brown. Though there is nothing the both of them can do with their eye colors, their appearance should fool the assassin easily, with Michael dressing up as a helpless noble, leaving the rapier to him as he does not want to part with it.

The sky was about to get darker when the pair had moved into position. Knowing full well how to not sabotage a mission as a soldier, and with his experience in subterfuge, Michael approached what looked like an old woman that matched the photo Francois was given with. She looked senile, given her age, and nice. She was carrying what looks like a small sack of fertilizer, which was a perfect opportunity to engage in their mission. Francois, on the other hand, observed them from far away with the help of Michael's magic and his sniper rifle. He is located on a place where it is difficult for him to be seen as well as being in a perfect vantage point. Her home is not far from where they are standing, fortunately, and in his current position, he is able to easily look for any suspicious individuals.

Michael helped Miss Cooper with her sack of fertilizer as she doesn't look as strong. When the two finally engaged in what looks like a pleasant conversation and they made their way to her home, he took this as his queue to look around. He thought that, if an old woman was to hire an assassin, it is unlikely for her to hire a professional. He deduced this as he had access to her records, which shows her to have little wealth, and not earning much. He's trying to find an amateur assassin, and it is high unlikely that he would assassinate from afar, and that he should only be nearby.

And he had found the would be culprit. The assassin was wearing what looks to be a ninja outfit, which pretty much makes his assumptions correct. They were also carrying a shuriken, and is evidently following them. Clearly, this person was more than an amateur. If there was a word that describes the assassin perfectly, it wouldn't be 'amateur', and more like a mere novice. This is great as he does not need to attack with a weapon he is unfamiliar with.

As he descends down the bell tower, he uses his magic to make himself move at a very fast pace, and with how fast he is currently, it won't be long until he met with the assassin in question. In just about a couple of minutes, he was able to catch up to the novice who was about to kill the old lady. He unsheathed his rapier, Chevalier de Fleur, and with a flick of his weapon, a single stream of crystal white thorns protrude from a magic circle, threatening to wrap itself around it. The novice perked its ears up as he heard the incoming spell that was about to hit him, and as he tried to dodge, he move too late as the thorns latched unto the assassin, binding him completely. "You are coming with me." Francois says before he attacked the bound assassin with a heel drop kick, knocking him unconscious.

Rummaging through the assassin's belongings, he found evidence of the assassin's contract with another old lady by the name of Miss Beau, which he will be paying a brief visit with after sending him to jail, and most likely going to get an arrest warrant of the one who hired to kill the innocent Miss Cooper.

After taking care what needs to be taken care of, Francois met with his sibling by the inn he checked himself in, which was where the two had changed clothes. "I take it the assassin is dealt with?" Michael asked, though rhetorically as he knows he was successful in apprehending the would be killer. Francois lets out a sigh out of disappointment from his recent endeavor with the assassin, which he isn't thrilled to have met. "More like a wannabe edge lord. The plebeian isn't even worth staining my blade with his blood with." He made his snarky remark while handing him his rifle. He has expected fierce resistance but the apprehended criminal didn't even pose much of a threat to him, which he clearly looks down on.

Still, a job is a job, as disappointing as it may. At the end of the day, after exchanging banters and changing back to their former appearance, the two parted ways. His sibling left Oak Town to report to his order while he stayed in Oak Town for awhile to regale 'Miss Nosey' of what has transpired. She is glad Miss Cooper is ok, and he assured her that an arrest warrant will be made to apprehend Miss Beau of her contact with an assassin.