Blacklist | The Watchman:
Job Title: Blacklist: The Watchman
Rank: A
Job Location: Anywhere there would be some sort of time keeping device, even if its on a wrist.
Solo Word Count: 7,000
Group Word Count: 14,000
Additional Requirements: Must be a Dies Irae member.
Job Description: As his name suggests, The Watchman is a dark mage that has made a habit of spying on Dies Irae mages everywhere they go and attempt to interfere in their noble goal of maintaining order and eliminating darkness. Instead of seeking him out, he’s bound to come to you. Just keep an eye out on any clock or watch face in the area, because he loves to jump out of those like portals. It’s quite annoying. You might need to punch a clock to start getting paid...literally.


☩ Enemies: Generic Dark Mages x5
☩ Enemy Rank: Normal
☩ Enemy Stats: These are the guys you finish up fighting when The Watchman appears at the end. You can customize their magic to whatever you want.

☩ Enemies: The Watchman
☩ Enemy Rank: Boss
☩ Enemy Stats: This guy is pretty creepy. He’s very tall and looks like he died already, and is obsessed with time and time puns. Despite his gimmick, he’s quite dangerous and shouldn’t be underestimated. He’s taken out mages stronger than you. The Watchman uses four gold pocket watches that can expand to roughly the size of a human head. They can extend further with spinning blades and they wail while being spun, which sounds like ghosts. If spun fast enough, the volume and pitch of the wail increases to disorient foes. If his weapons aren’t enough, his magic is ghost based, but the spells are up to you.

In theory, the Rose Garden would be a place Ezekiel might enjoy visiting.  But in reality, it was all too busy for his taste.  Though, despite the hustle and bustle and boisterous crowds, the goods and the flowers put a smile on his face.  He appreciated the various smells and colors, as well as the lively magical feeling the surroundings gave off.  Every stand and shop was a new world; a different culture brought for sale at each corner.  The air was filled with the scents of foodstuffs and magical plants, reminding him of the markets on Amber Island.  It was evening now, and orange clouds hung over the sky, blockading the moon.  The streetlamps gradually lit themselves, illuminating the Rose Garden in a rainbow of color.  Ezekiel explored the markets before the nightlife began to come in and take over, briefly forgetting what he was here for.  He had arrived early, and now awaited his mentor Johann, another powerful mage from Dies Irae, to apprehend a convict known as ‘The Watchman.’

Boozy aromas and hazy music began to spread about the Rose Garden, intoxicating and relaxing.  The mixture of liquor and magic infiltrated his body, almost making him feel a bit loopy, but he gathered his wits, cautiously watching the clock tower in the center of the plaza. From what he read in the job description, the target suspect had an affinity for such ‘timely’ things.  Though, amidst his focus, he felt something slide from his pocket, and deftly turned around to see a commotion in the crowds.  For a moment he thought his wallet had fallen into the dirt, but saw a hooded figure dashing around a bush.  With a sigh, he unveiled the Atrophie Bow from around his shoulder and slung an arrow into the drawstring.  He slowed his breathing and followed the tail of the pickpocket’s coat.  As he was about to pass a tree and enter the hedge maze, Ezekiel loosed the arrow and pinned the thief to a tree.  The perpetrator landed with an audible ack! and dropped Ezekiel’s wallet.

“Oh hey, I have the same exact wallet,” he joked, then picked up the leather.  The thief laughed and shrugged, then Ezekiel plucked the arrow from the tree and let him go.  In the distance, just outside the market square, a specific store caught his attention.  In the display window hung numerous clocks and watches, glistening in gold, jade and brass.  He approached the store, although it was closed, and peered inside. The brightness of his eyes somewhat blocked his reflection, and he could see only darkness inside.  Hmph, he groaned, and backed away from the display window.  Just outside the door, a man stood who was previously not there before.  He wore a bowler hat and sported a thin moustache, as well as a long brown peacoat and loafers.  Ezekiel immediately felt chaotic intent from him, and slowly shifted his rifle from his back.

“Wonderful evening, isn’t it?” he asked.

“Indeed,” Ezekiel said, and wielded the Draíocht Rifle in front of him with practised agility.  A bullet escaped the barrel, but the man simply extended his hand and shredded the bullet with magic.  Before he could use another spell, the man fade into shadow and reappeared behind Ezekiel.  He heard a snicker and shot around, but the man disappeared again, teleporting somewhere he could not find.

Re: The Watchman | Ezekiel & Johann 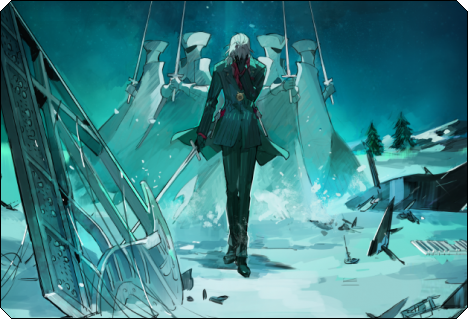 Rose Garden. The fresh evening air filled the town with a gentle breeze, slow, but determined steps taking the Ambassador of Dies Irae over the cobbled roadside to a particular spot, a clocktower in the center of a plaza. In truth, the silver-haired man had had some difficulty navigating this space, considering that, in a fashion that was no quite typical for Johann, he had never actually been to Rose Garden before. He had visited most of Fiore over the course of his three distinctly different careers but unfortunately couldn't say the same about this place, the resulting confusion causing him to run perhaps a little late as he attempted to find his way to the meeting spot. In the end, he had to rely on instinct, along with the occasional question aimed at a local, to guide him through the now increasingly brightly lit streets, lacrima lights lining the roadsides. He had, of course, not come here for the sake of recreation, though.

The purpose of his little excursion to Rose Garden was, as much as he might dislike it, of a strictly professional nature. What brought him here today were reports of a man who, in a stroke of eloquence, had been dubbed "The Watchman", an individual that, against the assumption suggested by the somewhat harmless-sounding name, was demonstrably dangerous. Reports indicated that he had recently been interfering with the business of the guild and its members, stalking soldiers of Dies Irae and, when the opportunity arose, attacking them. So far, a few members had had run-ins with this individual, and luckily none of them died, but the fact that this was becoming more of a common occurrence was a fact that remained alarming.

So alarming, in fact, that it prompted the intervention of the Ambassador, in his opinion. Apparently, the target wasn't necessarily one to mess around, and, given the report, neither would Johann. For the occasion, Johann had requested back-up in the form of his mentee, Ezekiel, to assist in apprehending, or possibly, eliminating this convict, meeting the young man here in Rose Garden. Or hoping to meet him if he could find his way to the place of meeting.

That was the plan, at least. Somewhat lost in contemplation, the man was suddenly torn from a state of thought with the eruption of a loud, resounding crack, heightened senses instinctively reacting to the echoing ripple. A sound that, to the Ambassador, seemed not unlike a gunshot. Picking up the pace, the silver-haired man broke into a sprint, dashing towards the source of the noise with practiced, swift motions, arriving at its source in no time.

Much to his surprise, the man found that his Mentee was already present, slowing down and coming to a halt before the other, the usual, black cloak that constituted part of his uniform hanging loosely from his shoulders. "Zeke" , the greeting was simple, unceremonious, Joh giving the young man a nod as he adjusted his hat, tucking a few strands of silvery hair underneath. His eyes fell on the weapon in his hands. "My apologies, it seems like I'm late to the party. Trouble?", the Ambassador asked with an inquisitive, concerned voice, though unable to spot any immediate danger, his stance, therefore, remaining rather relaxed. Naturally, he reckoned there had to be a reason why the young Soldier had presumably fired his gun, and remained rather curious, listening for an answer as he let his gaze wander.