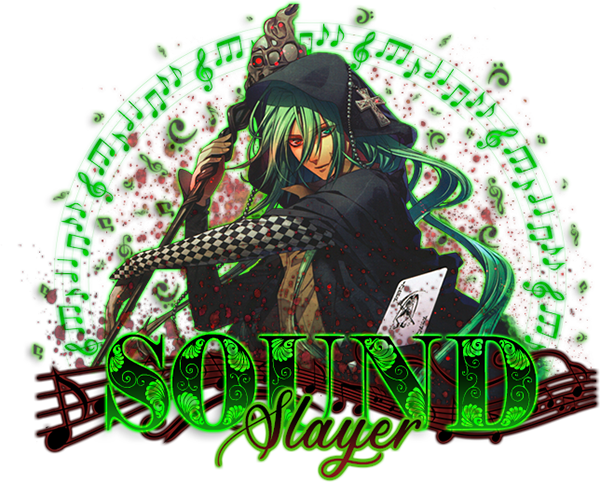 Magic Name: Sound Slayer
Magic Type: Dragon Slayer 2nd Gen
Proof: Page 2, Post n°28 - Oddities Shop
Description: Like any other Slayer, Sound dragon slayer is able to control elements, such as Sounds, Wind, and Music to their will. They can even eat Sound and Air to be able to control these elements better. A typical quirk of the Sound slayer would be spontaneous bursting out into songs or whistling tunes, but they’d have to be careful as they could be deadly depending on if a spell is set loose.

Dragon Slayer 2nd Gen:
~ +25% Strength, Speed, HP.
~ Greatly enhanced Hearing, Sight, and Smell.
~ Ability to Consume Magic of same element for MP as well as the Force Ability (See below)
~Resistance to their slayer element based on strength of spell/ability as follows:
~ 2 Ranks Above Character: 0%
~ 1 Rank Above Character: 10%
~ Same Rank as Character: 25%
~ 1 Rank below Character: 35%
~ 2 Ranks below character: 50%
Magic Consumption: Slayers can consume their own element(s) and this allows them to recover magic power. If a spell has 20MP within it and they eat it, the slayer gains 20MP, etc. If the spell they consume is any higher in rank than they are they only consume MP equal to a quarter of a spell of their own rank, but they take full damage from the spell. Resistances do not affect this damage taken in any way.
~ Naturally Occurring Elements: Naturally occurring sources of the element can only restore MP equal to a quarter in MP of a spell of the users rank per post when eaten, no matter how much of it you eat.
~ Additional notes: Slayers cannot consume their own spells whether this is from their magic, a weapon, a summons/Take Over's spell. Slayers can’t eat their pet’s spells, or their pets if they are made of an elemental magic.

Dragon Slayers: Dragon Slayers can eat all pure forms of their own element, but they cannot eat elements that are mixed with other elements. (Ex.: Ice DS cannot eat Dark Ice) If they do, they get incredibly sick and are drained of 10% of their health.
~ Advantages: The form of elemental magic they use is neutral (pure), in between the light and dark side of the magical spectrum. Deals double damage to Lizard, Wyvern, and (Lesser and Greater) Dragon non-human type opponents.

~ Disadvantages: Though Dragon Slayers get these benefits, they do have one set back. Motion sickness. Dragon Slayers cannot ride on anything without getting motion sick. However, they can use their exceeds or friends to fly around because they are not vehicles, they are friends. The only slayer that is immune to motion sickness is the Sky Dragon Slayer. Motion sickness can be cured in a thread using a user-rank healing spell.
Second Generation: These Slayers have learned the magic from a lacrima produced by the Great Dragon/God/Demon of their respective element.

Second Generation Force: A Slayer must consume at least 5 spells of their rank in magical energy from his respective element to achieve Force (Max. H rank), but must have at least 50% of their total MP to be able to enter.

~ Force highly increases the power of the Slayer's Strength, Speed, and HP by 50% rather than just 25%.
~ The base spell damage is increased to 150%.
~ In Force, the Slayer gains an aura of their element that engulfs their body. Physical attacks deal status effects from their respective element. (Frostbite, Burn, Poison, etc.), which adds a base of 20 melee damage onto their strikes.
~ During force spells cost no MP to cast.
~ To maintain force one must spend 10% of their MP per post. This amount spent cannot be regained during the duration of MP. Once the user of force hits 0% MP or choose to cancel it, force ends. If one hits 0% MP they suffer magical sickness as normal.

Unique Abilities:
~ (D) Wind Power: As a sound slayer is able to control Wind, their Mana Power is buffed by 50% at B rank, going up 5% each rank up to 60% at S rank.
~ (B) Soul Music: As music is a healing mechanism, this boosts the slayers Health by 25% at B rank, going up by to 30% at A rank.
~ (S) Sound like Trouble: After the slayer whistles, their magic damage is buffed by 70% for 5 posts once per thread.