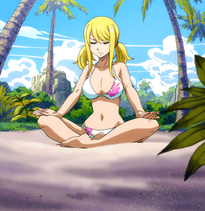 The first thing that Lysandra Tsukino had noticed about her journey to the Silver Wolf guild hall was that it was blisteringly cold. It was not as if she hadn't been expecting for there to be snow; they were located atop a mountain in one of Fiore's coldest regions. In fact, the blonde wizard had packed extra coats in her trunk for this precise reason. What she had not expected, however, was for there to be a severely chilling blizzard that ripped right through her, causing her to open her trunk, which she was wheeling up the mountain on a cart, and pull on two more coats over her original outfit. She was now layered five times over in warm material, but still, her teeth continue to chatter.

She's halfway up the mountain before she comes into contact with the blue wolf spirits. When she had heard rumors of the guild hall, she had thought the ones in reference to the guardians of the guild hall to be nonsense and had nearly completely disregarded them. Now, she understands, that rumors should more often be taken at face value. As the wolves near her, her spine straightens. Their soft growls set her on edge, and her hand lowers to grip the hilt of her whip. She will realize later that the movement was more a move of comfort than a move toward actual defense; weapons have no effect on phantoms, after all. However, as the wolves grow closer, she realizes that there is no need to be so cautious; the air around her warms and they begin to guide her on a much more clear path up the mountain. They are offering her safe passage up the mountain, she realizes. The rumors about the wolves guiding those with good intentions toward the guild must be true, too, she thinks to herself as she follows their lead, noticing that they are notably far out of her reach at all times. There is a temptation within her to walk closer to one and reach out toward its blue ethereal coat and stroke its fur, but she stops herself before acting on her animal-loving impulse. Something tells her that these wolves would not take too kindly to her approaching them at any distance closer than they currently were to her.

It is not much longer before the blizzard begins to let up more. She reaches a bend in the trail, and before she knows it she is staring at the guild hall of the Silver Wolf guild. The wolves have disappeared from sight, but she no longer needs their guidance; she has arrived at her destination. Now all she needed to worry about was whether the guild would accept her as one of their own. She really, really hoped that they would. She had first heard of the independent guild a year before as she was passing through a port town on the southern coast of Fiore. According to a sailor who she had sat next to at the bar of a local tavern, a Silver Wolf guild member had passed through just days ahead of her on their way to complete a job. Lysandra had been guildless for quite some time at that point, taking on odd jobs she found posted at wizarding hangouts and stores and the like. It was days before she heard someone in the next town tell the tale of a Silver Wolf member who had defeated a monster who had been wrecking up the hulls of the ships in the next port town over. The gossiper had relayed the story in intricate detail, from the spells that the wizard had used to the large sum of money he had been rewarded. Lysandra hadn't believed her ears; she had not up to that point realized that guild wizards could make such large sums of money from proper jobs. As a girl who had grown up with a mediocre wealth from her father's merchant work and her mother's paintings, the thought of being able to make so much money by using her magic appealed greatly to her. From that day forward, she had absorbed everything she had heard about guilds, desperate to join a guild one day. Though she was a wizard, she had never truly attempted to become more than averagely skilled in her work. Her desire to join a guild changed this for her, though. The better part of her former year had been spent honing her skills and making herself more knowledgeable and powerful than she had been before. She just hopes she was now skilled enough to convince the Silver Wolf's guild master to accept her into their ranks.

Lysandra decides to shed a few of her coats due to the storm's light effect on the guild hall. She is thoroughly surprised to find that the coldness is nearly gone from the area, leaving her surroundings a small but pleasant kind of cold. She deems it unnecessary for her to wear five layers of clothing if there is no wind tearing through her, and she sheds most of her clothes, leaving herself adorned in her long-sleeved blue sweater, a thick pair of trousers as green as leaves of an olive tree, and a deep blue hooded cloak. Fiddling with the button of her cloak, Lysandra makes her way up the steps to the guild hall, her boots leaving shallow footprints in the layer of snow that covers the ground surrounding the guild hall. She hesitates as she steps in front of the main door, raising her fist to knock. Her introduction has been practiced over and over in her mind for miles, but now that she is here her nerves are beginning to kick in. What if they turn her away? What if they are no longer accepting members? What if they find no use for her abilities? And, her most terrifying thought of all, what if no one here likes me?. Finally, she swallows her anxieties and raps sharply on the door. Patiently she waits, crossing her arms around her stomach, which has tightened with nervousness.
Leona Jarnefeldt

Wearing her green-and-gold outfit and Argent Gloves, Leona sat in her office poring over an archaeology magazine with an article written by Dr. N. D. Anna on the Lestreki people and the artifacts that she had uncovered with Leona's help. The doctor's faithful assistants Melanie and Stacy had helped too, but Leona had done the lion's share of the work by traversing the three trials that separated the party from the artifacts they were after. Leona read the article and did not see a single mention of her name anywhere in it, but she was not too upset. She did not want to take attention away from Dr. Anna's work and make herself seem more knowledgeable about ancient civilizations than she actually was.

Leona would read the article again later when she had time to spare. Right now she had procrastinated enough on a stack of reports and budget papers that required her attention. On top of that, the library needed Leona's personal attention because there was a need to sift through the books and determine which ones could be removed from circulation. Leona placed the magazine in the middle desk drawer and closed it, then settled down to the dreary but necessary business of reading budget reports.

Leona had time enough to slog through four reports on the guild budget concerning food expenditures and coffee purchases. The guild staff had a voracious appetite for coffee and bread, particularly bread for use in sandwiches and donuts for late-night shifts. She picked up a report on the consumption of paper and could not believe what she was reading. She had a sneaking suspicion that all the reports that reached her desk were a part of that problem. The reports had reports for their reports.

"Guild Mistress, you have a visitor." An older female staff member said to Leona. Leona thanked the woman and stood up from her desk to greet the new arrival in person.

Leona walked through the foyer and over to the door, which she opened with her left hand. On the other side of the door was a blonde-haired and brown-eyed young woman in a blue long-sleeved sweater, olive-green pants, and a deep blue hooded cloak. The young woman was only two inches taller than Leona.