Guided by the Stars 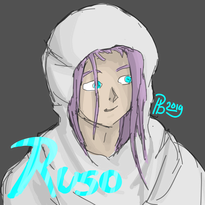 Guided by the Stars

Ruso began to feel his feet sink deeper into the pale snow, the weight of his body becoming more and more challenging to bolster with each trudging step. The crunch of ice and snow beneath his feet grew and grew, as the sharp, cold wind battered at his form. He saw that up ahead, the freezing wind swept at the sheet of snow on the ground, lifting the cold icy dust into the winter gale to dance around in a carefree yet threatening way. At this point, he could hardly make out the dark night sky, and the snow was up almost past his knees. He squinted his eyes and could hardly see the stars, though they were abundant. He reached down to his shirt and lifted it up over his head, being careful to hold it steadfast in his grip as the frozen riptide attempted to overtake it. He stuffed the thin silk shirt into his bag and did his best to observe the stars, matching them up with the tattoo on his chest. He ascertained the worst; it became painfully obvious to him that the only way to his destination was through the thick curtain of piercing wind and snow. How could something as fragile as a snowflake, and as fickle as the wind prove to be such a devastating foe? To any weary traveler, the frost might have taken them then and there, however to Ruso the chillness of the snow against his skin was rather refreshing. The astrologist had spent the past few months trekking through an arid desert, and while the heat was nice, it was starting to bore him. He continued into the blinding blizzard until it closed around his periphery. It became almost impossible to tell direction as with each passing moment, the squall circled around him, never giving away its confidence. Ruso looked up to the sky but he found that the stars themselves were as hidden as the ground he walked, the whiteout invading his every perspective. At this moment he watched as 2 ethereal creatures approached him. He kneeled down as much as he could to them, with the snow consuming him to the thigh. As they approached it became rather obvious that they were large wolves. Their eyes gazed, and almost pervaded their way into his own, searching to the depths of his heart. And with that, they walked into the flurry. The only recourse that seemed possible at this point in time was to follow them. And so he did. After a few minutes of trekking through the harsh storm, Ruso found the snow beginning to release its chilling grip, and he saw a light in the distance. The wolves halted, and Ruso walked ahead of them for a good 10 feet before turning to thank them. Much to his chagrin, they had completely vanished, and to any passersby (though it would be rather silly to assume that anyone would be lurking in this pale, frozen flurry,) all they would have seen is a shirtless man, thanking nothing but the snow and wind at his back. Either way, Ruso surmised that the lights were what he came for, and continued his journey. Once upon the doorstep of this safe haven amongst the storm, he let out a deep sigh of relief, hesitating before knocking on the door. He took a moment to sit on the step and collect himself, looking into the pure sheet of ice he somehow emerged from. He reached into his bag and searched for his shirt when the sound of a creaking wooden door timidly shattered the previously uncontested howling of the wind.
_____________________________________________________________________________________

Standing in the guild library while wearing her green-and-gold outfit and Argent Gloves, Leona watched the staff continue to organize what she had obtained from the Order of Lightbringers. She really needed to get those books on vampires, but she had not gotten any work from them lately. Maybe they had found a new errand boy or errand girl and the blonde had been unceremoniously dumped because of what Amanda had said after the Haunted Guild job. Oh well. She could always find work either in other countries, in Fiore, or in the guild hall.

Plenty of people were willing to pay a Wizard Saint to solve their problems. The sultan of the Tri-Council City was willing to pay Leona for her work despite their wariness of any mage not under their thumb and Leona technically being a subject by virtue of her birth in Nebdoui. Then again, making an enemy of a Wizard Saint was not a good idea, even for the sultan of a sovereign country.

Leona's musing about employment was interrupted when she head knocking on the guild hall door. She left the library behind and answered the door to find a young man with lavender hair and bundled in robes standing outside. It was clear that the youth was suffering the effects of being in the cold.

After pulling his shirt back over his body, Ruso knocked on the door of the building, to see as a shorter, yet commanding young woman appeared in the door's frame. She exuded a powerful magical profile, and her aura was palpable, which threw Ruso off, as her eyes also appeared to radiate with kindness, gentleness, and fun. The juxtaposition of these 2 aspects shook Ruso to the core. He froze in place and began to shake. He was by no means shaking from the cold, but rather the uncertainty of his situation, as he didn't know what he was face to face with in this moment. The woman before him seemed to stand as a perfect symbol of the snowstorm he emerged from. A symbol of dainty snowflakes brought forth into a furious blizzard.

"Yes, you're in the Guild Hall of Silver Wolf." Leona assured the young man as he stepped out of the cold and she shut the wooden door behind him. If he had come to the guild in order to join it, he was in the right place. She detected his magical signature and ascertained that he was a mage who was just starting out in the world. She had a faint idea that she might be intimidating him, so it was a good thing she had abstained from wearing the Adaptable Armor or any visible weapons. Leona made sure the door was shut and turned to face him.

"So, what brings you here?" Leona asked the fellow, trying to be as friendly about it as she possibly could. She hoped that he did not feel threatened by her magic signature. She needed to find a way to suppress it so that others could be at ease around her in non-combat situations like this one.

"I was interested in joining the guild. I'm an astronomer and I have recently discovered an ancient kind of magic. I was hoping that you had an archive of sorts so I could study this new magic. I'd be willing to offer any information I have about it for your records."

The young wizard looked around the building as they walked. He saw another person sitting in a room and waved to them, but they appeared to be enveloped in a book. So he continued walking. "My magic is rather interesting, and it appears to be a bit esoteric in its capabilities." To demonstrate his statement, he stopped for a moment, reached into his backpack and grabbed a pen.

"My current hypothesis is that it is based on the dichotomy of the cosmos. It has the destructive power of the endless void," and with that, the pen seemed to glow with dark energy, erupting into dust, mixing in with the air around them. "and the creative power of the stars." With these words, the dust around them swirled into a vortex culminating into a small white lily flower, hovering in the air before Ruso. He grabbed it and offered it to the guild master.

Leona was interested when the fellow mentioned that he an astronomer and was interested in joining Silver Wolf. She was always glad to meet and greet prospective new members of the guild. Her interest only increased when he discussed his magic and began to discuss his theories on its origins, which were lost on the blonde but were still very interesting to listen to. When he offered to help her by offering information to the archives, her interest increased even further.

"To be honest, we need more information for our archives. A lot more information. I've been trying to update the library by looking for up-to-date books, but it's been slow going." Leona admitted to him. She was not going to lie and make everything sound peachy when the situation was far from perfect. If the fellow could help them get things more up-to-date, then Leona was all for it.

"I can't say that I've heard of your particular type of magic before. It might be in our archives, but I haven't visited them in some time." Leona made another admission. She had been so busy running jobs for other people that she had not taken any time to familiarize herself with the archives. She needed to remedy that problem sooner rather than later.