Re: An Unexpected Journey

Ryo smiled as he watched Gaia and Karasuki. His magic was fully interesting to him and he loved it, but at the same time he realized that not many people would get it nor understand why he loved it so much. Yet, he still loved it so much. Hearing the layout that Gaia was going with he smirked. It was a simple and straight forward pattern which could be used to make a fairly straight forward prediction. Yet, at the same time it was clear that if she went with that pattern the questions and the answers could be a lot harder to interpret or predict.

Still, this was Gaia’s show and he simply shut his mouth, closed his eyes, and listened smiling widely as he heard about the way she was going about the reading. When she was done, he snapped his fingers and the cards shattered into tinier cards which began to whirl around the three of them. Holding out his right hand they all flew into it until there were only three cards left which were the true and original cards. He looked to Gaia “My dear Gaia, this is a gift of my magic. It is called Combo Card Magic. I would be honored to teach you. However, this magic is a specialized magic passed down from Master to student, and so on. There are maybe a dozen masters of this particular magic, and I’ve only met the one. My Mistress Amelia who taught me.”

He turned his attention to Karasuki with a soft smile on his lips “My dear, the cards don’t actually lie. They do however not tell straight forward truths. They are like the Fae; their truths are half truths and they are very capricious about what information they give. You see, one card has many, many different meanings, it is through your desires and your will that make the cards give you an eye on the future. Do be very careful though, the cards are treacherous to those who don’t treat them with the respect that they deserve. Still, this reading tells me one thing. You are worthy of our guild, and that if you believe in yourself, as well as your magic then you will find your place among us.” He tucked the cards away recalling his Tarot cards back to him in a flurry of motion never actually touching the cards himself.

Presently, he moved towards the center of the room standing on a very intricate design. He gestured to it with a warm smile “Now then, I would like you to do one last thing. Your guild tattoo unlike most others is a key. Without this key you are unable to get to the Sabertooth Guild Hall. We designed it this way. There is no possible way to enter Sabertooth’s guild hall without a tattoo, and as the guild master I can revoke a tattoo from most anywhere in the world. Not to mention our guild Pet Ratatoskr will, and has killed anything, and everything that has come to the Guild Hall without a tattoo.” He sighed softly “He’s even attacked a few members of our guild regardless, and he has nearly always come to attack when I enter with newbies. Though he stops when he sees it is me and I tell him that it is alright. Even so, this is no joke. We take security very seriously in Sabertooth, our guild hall was brought low by an attack we couldn’t stop. We have sworn to never allow ourselves to be that vulnerable ever again.” Re: An Unexpected Journey

Karasuki pushed up the centerpiece of her red colored eyeglasses and nodded at Gaia Sabin as she spoke of a card spread. She hadn't ever gotten a card reading before and it seemed really interesting to her. For the millionth time, and it didn't help that she had seen her earlier today, Masha had popped into her head. Masha would have loved the spontaneity of Ryo's cards being used by Gaia, drawing the fun out and luxuriating as if they were in a hot tub of magic and mystery. She was always the fun one. Karasuki straightened her shoulders and back, giving herself a boost of confidence and pushing the old thoughts away. When Gaia fanned the cards out and held them out, Karasuki focused.

She pointed at the one in the far right, and the next one just three cards away. For the third card, Geralt interjected, "Let me pick one!" In her mind, Karasuki conceded. It had the potential to change the cards she supposed, but Geralt was sort of a part of her too. Who knew what it would do to the cards? "The one six cards from th' left, that's the one I want." Karasuki obliged and pointed out the final card to Gaia. Gaia threw them over her shoulder and Karasuki watched with interest to see where they would land. "I lost track," Geralt whispered, "I don't know which o' the three is mine anymore." He sounded disappointed about it and Karasuki would have given him a polite pat on the shoulder if it were the right time and place. When the cards were flipped over, Karasuki tilted her head a bit. She had no idea what an Eight of Swords was for, an impending battle maybe? And the Knight of Wants and a Knight of Pentacles. It was odd there were two knights, maybe it was the effect of Geralt directing the third choice that rendered them both knights. They had very magical names, maybe they would give away her secret to them.

The first one suggested that she was in denial of something or that she had lacked the strength to face a situation. She supposed that was true. And then Gaia listed a couple more meanings and Karasuki made a slight face; there were many options and none of them were confirmed as real possibilities until Gaia mentioned the feeling of imprisonment. Geralt blushed a bit, feeling embarrassed and Karasuki didn't press the issue, it had to have been the card that he had chosen. It was fascinating and it certainly made more sense with him in mind. Karasuki simply smiled as Gaia lifted a brow in her direction and gave a shrug, "I suppose those could apply." The next card, a Knight of Wands was about a path of adventure and how it may or may not have been held back by her. She didn't know how to take that card's reading, but again it made sense to her somehow. It felt fitting.

The final card Gaia gestured to, the last giant picture, was of the Knight of Pentacles. It told Karasuki to stand her ground and make progress. She wondered internally if it meant standing up against Geralt or if it meant standing her ground even with the presence of Masha around. She wasn't sure that she was a brave person, but she was certainly not a complete coward either. Maybe it just applied to her as a mage in general. Karasuki clasped her hands before her and gave a half bow, quickly, "Well, thank you. That was quite entertaining!" The returned bow came with a cautionary warning not to take the cards too seriously, which Ryo echoed. The cards told half truths, so it seemed, which only made the whole reading vague and challenging to understand. It was interesting at the least, even if the book summoner didn't know what to do with it right now.

"Still, this reading tells me one thing. You are worthy of our guild, and that if you believe in yourself, as well as your magic then you will find your place among us.” As Ryo tucked the cards away he gestured to the center of the room. He explained that the guild tattoo was a key designed to enter the guild hall. The guild pet's name was Ratatosk and although he usually goes after those who try to enter the guild without a tattoo, cases of mistaken identity or distrust have resulted in new mages with tattoos getting attacked by the pet as well. Karasuki looked nervous, "Sounds very serious to me. I won't ever be a danger or knowingly bring danger to the guild, I swear." She didn't know what form the pet took, whether it was a venomous spider, a monstrous humanoid, or an entity of smoke. All she knew was she had no interest in facing it alone. Then the guild leader moved to the center he had gestured to and asked her to use the tattoo to open the portal to the guild by herself and Karasuki became slightly paler.

"Just feel the portal trying to open," Karasuki said looking up at Ryo with a half question in her eyes. She had the tattoo, clearly she wanted this, but this final test was a test of just how much she wanted it. The worst part was when he said he would not be following. She had grown fond of him, Gora and Gaia. She inhaled deeply and adjusted her bag. "I can do it," She said to Ryo and Gaia with a broad smile. At least a smile to hide that she was afraid of getting attacked or of the portal refusing her because Geralt's soul was inside of her body. A true member, she thought. She felt Geralt staring at her, waiting for her to move on. "It was wonderful to meet you all, I will see you around," She said confidently.

Karasuki motioned to the center as she moved towards it. She could feel the power emanating around her and she could feel the power of what had to be the portal. Karasuki tensed up, concentrating. She whispered, "Come on, please?" A few long moments passed, feeling like forever. She felt the power fading, vanishing, slipping away. She felt a sudden heat and heard the sound of growling. She set her jaw and refused to stop, persisting. She wanted this and wasn't going to let it slide from betwixt her fingers. "Open, open," She commanded softly under her breath. And then the feeling of energy pulsated and a burst of light appeared for a moment as the portal opened before her in the center of the room. 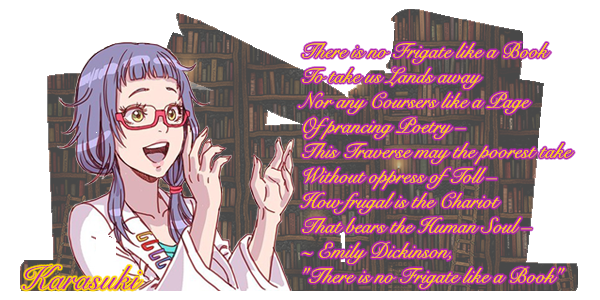