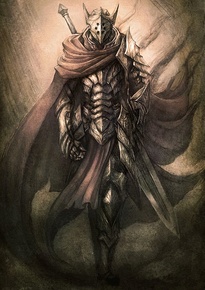 Link to the job: https://www.fairytail-rp.com/t20742-wine-testing

It was a cool and beautiful night, with a full moon out that lit up both the streets without light and the black ocean. If one were to take his love on a date then tonight would be it... Just not for one simple man.

It hadn't taken long for Amose to get to the restaurant or whatever the place was. Once he heard, "Wine tasting," he was the very first to sign up for it in the literal first minute it was up. He had been bored, mostly trying to train and gain his strength back, however what was annoying was the fact his magic was useless. The guy thought it might have gone dormant for a long recharge, no problem, yet. It made sense that his power goes dormant, since he had used it nonstop for nearly two years he assumed that it was just overused and needed to rest, if that made sense.

This gave him the chance to be normal like a regular human for the most part. This gave him the chance to join "guilds" as they are called, which was not bad but needed dress code to look formal. That was no problem, however to remain in that guild he must be required to join or take missions, or jobs rather. A simple one to start off with was this place in Rose Garden if it was called that.

This place was a high class restraunt, that meant it was going to be nicer than a tavern, and for a change Amose wore his West Fiore Trading attire or as he called it a "monkey suit." It looked nice, just he didn't feel very comfortable in it, since he didn't feel like choosing something nicer like an actual dress suit the WFTC suit worked just fine.

Eventually, what seemed like walking forever Amose found the restraunt, and indeed did it seem high class. It was cleaner than most places on the outside and looking through a window he could tell the place was made for the rich. And then here he was, a simpleton looking at a rich mans shop of delicacies. The reward for this job, if one could call it that, was a anything for free off the menu of this place. [i]Anything[i] for free, this was not currency but for Amose it was close, he could definitely throw down on a couple plates, well perhaps a couple was too few for the man.

Amose entered the restraunt with a bell ringing at the doors opening, clearly there being a "closed" sign but he paid no mind, just wanted to get this wine tasting over with, maybe the owner wanted it closed for said tasting?

An older man, perhaps in his fifties, stepped from around the corner and gave Amose a puzzled look. He wore a nice red and black suit, matched by a pair of those slick shiny shoes Amose had seen once, to top it all off he had the build of a potato: he just did not seem fit at all with that belly. The mans head was bald yet had what appeared to be ritualistic tattoos, perhaps he is from another country?

"The store is close ye' halfwit! Did you not see that sign there?" Unpleasant, the man shouted at Amose which the white clothed man did not take well. However this might have been the owner, so the company employee held back his scolding and possible ass beating.

"I'm here for the wine tasting." Amose replied in a neutral and quiet tone, careful to keep his anger back.

The man put on the pair of glasses and widened his eyes as he looked at Amose. He gave a hearty laugh before speaking, "Forgive me lad, these people in this city are, what's the word, needy. Theu don't care if we are closed, they just want their bellies full. Damned vultures they are. Anywho let us get you that glass of wine! I would offer to seat you at a table but..."

The older man looked back the large room, tables moved to one side and some even broken. He shook his head and looked back to the ever patient Amose, "A group of thugs tore through here, I dealt with them accordingly, the wee piss ants! They have no clue how much those tables are! But, I suppose you want your glass of wine? We can seat you at-"

"I can drink it here, don't worry about chairs or any of that, I'm fine standing up." Amose interrupted, not that he was impatient, just tonight was a very fine night and he would spend it outside gazing at the moon and city rather than bear an old man's problems.

The owner, so he assumed, nodded his head, "Aye, Ill bring ye' a nice glass." And then he took off.

The company employee looked around for a moment, taking in the luxurious sight before him. The walls were a grey somewhat with many beautiful patterns of flowers and insects colored black. There were tables against a mass of windows that looked out into the street, giving people a view inside the restraunt as well.

Following upward was the ceiling, a beautiful circular painting that depicted many religions, from a god reaching to a man to someone smiting another from a heavenly cloud with a hammer. It seemed many cultures were plastered on there, divided by a beam that supported the ceiling. Truly it was a breathtaking sight to behold... Perhaps the dreary grey of the place could be redone as if one were in a chapel to make the painting feel at home.

"I have ye' wine right here, lad." The owner said, snapping the attention of Amose back to reality and why he was here. The owner handed Amose a half glass of what appeared to be a crimson red, like blood.

Amose took it and nodded and thanks before taking a light sip, a fragrance of rassberry and honey hitting his nose. What little he tasted was remarkable, it tasted what it smelled like and to top it off he could taste the strength of the alcohol perfectly balanced with the sweetness of the berry juice and honey. There was more to it than that, but he wouldn't bother with the questions of what was in the brew.

Amose looked back to the owner and said, "Its good! A little strong for wine but its strength matches its sweetness, I like it." Amose may have exclaimed it, something not seem from him by very many let alone anyone.

"Ah! So ye' think this brew would do good?" The owner asked.

"Yes, truthfully it would sell for a high price I'd imagine. Its not like the piss water I've had in other countries."

The owner laughed, "Aye, we don't like buyin' other drinks from other companies, that's why we brew our own wine, its cheaper to get the ingredients and sell quality wine rather than the piss water. Well, if its good enough then I should give you that reward. You can buy anything from here for free on your next visit, if you stop by here again."

Amose almost smiled, but held it back and nodded, "Thank you sir, I might have to try the food here one day."

The two exchanged goodbyes, Amose leaving in a good mood. He figured he was trying some nasty ass drink from a cheap owner, but he was proven wrong, instead he tasted something he would have to come back for. Amose remembered how to get to the place, it wasn't hard to find after a few turns down some paths, but he would definitely stop by there again for that free food... And possibly the new wine.