Artemis was feeling unsure of himself today, he had a funny suspicion on why he felt this way to. It was most likely because Morte had recently reminded Art of his presence in a night club. It always shook him when the Incubus made himself known. There was periods of times where he was silent, and Artemis could almost forget him. But then out of the blue he popped up again, leaving Art with that uneasy feeling. He hated being reminded that Morte was still with him, living inside him. An uncompromising evil that he wasn't even fully sure he could control.

What he needed was something to rebalance him, a means of forgetting the demon. From past experience, there were only two things that made that possible. Alcohol, or women. He scanned the area, wondering where either of those things would occur.  Feeling better as he spotted the exact thing to pinpoint both requirements. A tavern. Smirking, he made his way over, pushing the door open. He stepped into reveal a surprisingly relaxed scenario. Clearly the afternoon drinkers hadn't arrived yet, so it was more relaxed at that time.
As he made his way to the bar, he ordered himself a pint of larger. Handing over the cash as the barman prepared his drink, he had been working more as of late which meant his life had been significantly easier. He was earning his own cash which meant he could spend it how he wanted. Not having to listen to his grumpy old grandfather complain about his behaviour as much. My money, my rules. He thought, taking the drink, he threw his head back and chugged it. Taking it all down in a matter of a few gulps, he slammed the empty glass on the bar. Letting out a satisfied gasp. "One more please and..."

Now he had quenched his immediate thirst, he scanned the bar for some delicious company. Laying his eyes on a cute blonde, he licked his lips. Very nice. He thought. "Send that lady another glass of whatever she's drinking on me" He told the barstaff. Watching as they soon approached the lady with the offering of a drink. 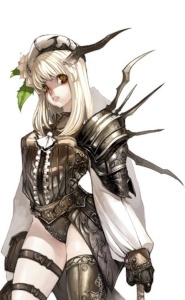 Elaine had found herself in the most unlikely place. She had spent the day as normal, woke up alone in her empty house that Az had made sure to pay in full. Any photo of Az and Destiny had been removed from the wall, either smashed or burned and every photo discarded made the long winding mark on her back pulse and burn even more.
From her experience, emotion made the seemingly alive gift on her back even more angry. She had excepted that the dark mark curled around her shoulders and her butt, it normally didn’t go any further than that.

She spent most of her time on quests, coming back and forth from her guild, chatting and trying to seem as normal as possible. Smiling, nodding, accepting. Today she tried something different. A tavern. She had entered in her normal white dress, though she had been stopped for her young features. So she re-equipped, opting for black shorts, red cross chest top and black thigh high boots. Matching it with her black cloak and tying her hair up in a high ponytail.

She had been staring off at the bartender, hearing the chime of people walk in and out, as well as the banter of good friends and drunk locals laughing into the echoes of the bar. She was startled when a drunk was slid in front of her, spilling on to the bar.

“Great gods.” She moaned. She gave a look to the bartender, brown eyes steeling over, “who in the good name would-“ she started to stand up. Not menacing. 5’3. Her cloak fell the ground, she was not okay with being ‘that girl at the bar’.

“The man...at the end.” The bartender grunted, gesturing to the red haired man at the end, giving her a sly smile. *Oof*.

She sighed, looked at him dead in the eyes and downed it. Slamming it down on the bar and marching over to him, wobbling slightly, I realized she had spent 2hrs here and drank more than she thought. She stopped and leaned down, hooded eyes and she pushed a sigh.

At first the girl seemed almost unhappy with his gift, although they could have been more down to the barkeeps sloppy delivery of the drink. It didn’t quite have the air of mysterious present but more like a sloppy drop off. None the less as she looked over at him, she didn’t make a rude gesture or curse. Instead she picked up the drink, accepting it. Artemis watched with great intrigued as the petite blonde stared him down as chugged down the entirety of her drink. Grinning at her with an all to satisfied expression.

The acceptance of the drink itself was a good start, when she made her way over to him. That made it even better. She seemed a little bit inebriated already, but with a build like hers he wasn’t surprised. He didn’t mind  either, alcohol was a tester benefactor to the lowering of inhibitions. People were more fun when alcohol took their guard down.

”I just figured a cute little thing like yourself could use some company.” He said in a smooth tone; quickly taking a better look at her. There was no doubt about it, physically speaking she ticked all of the boxes. She was dressed in a way he favoured, girls who looked like they were ready to rumble were always a win with him.

He was especially fond of his black knee high boots. They added an especially sexy quality to her ensemble, the gap of skin between the boots and her shorts were just begging to be touched. But not yet it was far too soon for that kind of behaviour, he loved to play with women. But not without their permission, that wasn’t his agenda. He enjoyed being wanted as much as he did the wanting.

”The names Artemis, Artemis Dagger, would you mind if I asked yours? I’d like to put a name to such a pretty face.” He asked coolly, before ordering another round of drinks for the two of them.

She watched him rake his eyes over her, staying a while longer to examine the gap between her shorts and the boots. She rolled her eyes and thought about summoning her knife to teach this boy a lesson from where he should keep his eyes. She sighed and summoned her cape wrapping it around her as it fell heavily over her body.

‘A cute thing...?’ She groaned mentally, another man taking his shot. She couldn’t help but turn red though, even though she wanted to feign anger, she alcohol influenced stupeur wouldn’t allow her to do so. She just managed a small noise of disdain before plopping down next to him, crossing her legs and eyeballing him. He wasn’t unfortunate. Crimson hair, well built, much much taller than she was, and he held this knowing smirk. Like she had already fallen for a trap he had set.

The drinks he hailed fell in front of her and she motioned for a glass of water to sober her up a little. The red haired man introduced himself as Artemis Dagger. Dagger, she laughed, like straight out an action film. She shook her head letting a few stray hairs fly in front of her face; pushing a sigh away she gave him a little smile.

He instantly recognized her displeased look at his comment, was it the hitting on her part of the problem, or was it the fact he had called her a cute little thing. Maybe he needed to take a different approach, some women didn't like to be seen as cute and little, but sexy and mature. He would have to test the waters, but so far so good. She was sitting next to him, at the very least he had earned her company, that was a win in itself.

"Well it's a pleasure to meet you Elaine," He said soft tone, it was clear to him that Elaine wasn't just some bar chick. This was a mage, he felt a little magical energy from her. He had yet to figure out her nature, although he wasn't sure if he wanted to. Sometimes when he felt a person's sin, it was a little off-putting. Although this might not be the case for Elaine, he didn't want to risk it. Afterall she was the hottest chick in this place.

"I was looking for entertainment, life can be quite dull sometimes. I find places such as these liven it up." He looked around, it wasn't the nicest of taverns, but it certainly wasn't the worst. He had been in some real dives before. The kind of place a girl that left you wanting a shower after, but the lower the quality the rowdier the place. Art loved a rowdy crowd to play in.

"So tell me, what does Elaine West like to do for fun?" He asked, his flirtatious red eyes locking on hers.