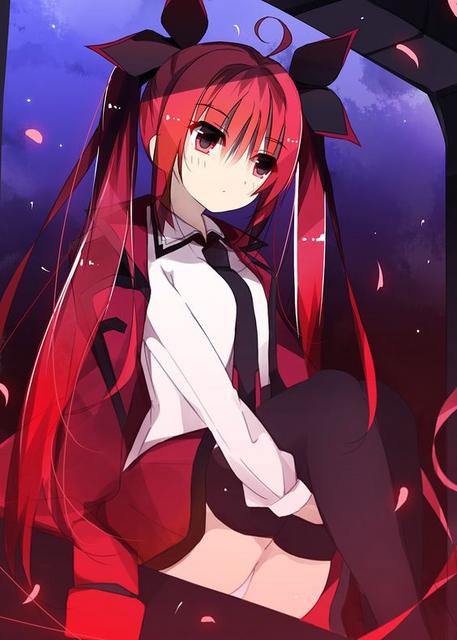 "Scuse me! Pardon! Sorry! Just gonna squeeze inbetween you mister!" The short, red headed girl would try to squeak as she rushed between the large group of people. She had a look of urgency on her face, as she tried to get through the crowd. "Oi! Someone stop that girl!" A voice boomed somewhere behind her, but Kaia knew better then to stop and look. How long had it been anyways? 5 days? A week? Kaia couldn't remember. She had lost track of time a few days before hand. The chases were getting more and more frequent, and she was running out of places to hide...

For 2 months. 2 months Kaia had been on the run. A large organization named M.A.N.A. had been chasing the girl all across Fiore, but luckily she was smart. And now she had powers she didn't understand, but always seemed to show up when she needed them. Why was she being hunted down? Simple. She had information in her head, and now power locked inside her body that these guys wanted to exploit. Her father had already paid the ultimate price trying to safeguard what she was protecting, so now it was her duty to make sure they never got what they wanted. Of course, that all depended on her getting away from them.

Finally bursting through the crowd, Kaia began a full on sprint down the street, sliding on the cobblestone to turn into an alley way. Not long after, three men dived into the same alley way, and began chasing the girl. Each of them wore similar outfits. White suites with blue lining, and the letters "M.A.N.A." Stitched across their arms. Kaia began weaving her ways through the buildings, and streets as the men were gaining ground. Looking behind her with a worried expression, she held out her palm. "Cmon cmon cmon! Work just this once for me!" She yelled at her hand as she tried to focus. For a moment, nothing happened, but soon a small spark lit itself on her hand. She smiled a wicked grin, before the spar grew larger until it was a ball of smoke. Turning her head, she tossed the ball on the ground, and within an instant it exploded! Engulfing the entire street in thick, black smoke. The men had to stop for a few moments, coughing and hacking their way through Kaia's little distraction as the girl continued to use the panicked crowd as perfect cover to duck into a smaller alley way.

Oak Town seemed rather vivid to the new dragon slayer, who nearly carelessly wandered through the masses of people. Having adorned a new outfit she was given by her right-hand man, Avide, saying it had once belonged to her late mother. It was slightly similar to her old dress, only darker in color, with a red ruby nudged within the deepest point of her cleavage. A short overcoat with open slits to show her bare shoulders, kept in place by a choker around her neck, added a bit extra to the look, and was trimmed with golden edges, in which old symbols of an hierarchic language were written. An heirloom, she was told. But she took pride in wearing it now she wasn’t on the job. Beside her Kite questioned about the reason they were here; the sightings of a certain monster of myths. One she’d sworn to take down. Yet she knew that if this beast was in fact as powerful as she’d read, taking it down by herself wouldn’t be a valid option. Kenna had thus turned to her guildmaster and fellow slayer, Kite Wilhelm, for help. Which he had eagerly agreed to.

”Yes… the Artem Demura; a giant humanoid beast, with a skin devoid of any color and a face lacking any expression. Some even daresay he has no face to begin with… but I’ve yet to come across someone who saw it in the flesh and survived. I’ve read that the Artem Demura normally doesn’t reside in places humans can reach, and isn’t supposed to be violent. Only to those who dare overtake its territory, it would raise its hand; but that’s only what the myths say. They say there’s a survivor located here in Oak Town, which is why I asked you to come with me and hear this man’s narrative about it. If it truly resides near human civilization and is showing signs of violence, we’ll have to cut it down.” she ushered, looking off into the crowd in between people’s backs. A dull thump, a noise similar to dropping a bag of wheat unto another, came to her attention, and she turned back to see Kite look behind them at a red-haired girl running away into the crowds. ”She sure seems like i--” Again the dark-haired man jolted forward as people bumped into him, cutting off the maiden’s sentence as he was pushed against her. Although the whole-body contact was brief, Kenna clearly felt an unnatural pressure upon her as she stumbled backwards. She stared at the backs of the men in white that were still running through the crowd, seemingly chasing the little girl. Kite added to that thought, claiming the same, and as she turned back to face him noticed how his eyes were now staring upon something lower than her face, letting her eyes dart down to see what he was looking at.

Flabbergasted she stared at her the hand on her chest, and then back at the one it came from, trying to utter words her voice refused to speak. On top of that she’d gotten several shades of red on her face as well, only meeting eyes with her guildmaster for a short moment, and gesturing to get going while his hand remained on her chest for what seemed to be the longest of moments in her life; Kite quickly mentioned not having meant to do so, and as she was still gesturing to get a move on he pulled her along with him in the direction the men had left in. The slayer had little chance to be embarrassed about the happenings, as soon after they gave chase a large smokescreen erupted out of nowhere, shielding a large proportion of the street from prying eyes. The white-suited men emerged from the smoke, and Kite almost immediately responded to their movements, telling her to track the girl and meet back at the ship. The ravenhaired maiden nodded in response. ”Don’t worry, I’ll find her in no-time fl-” his hand rested on her shoulder for a moment. ”Easier than a monster, right? ”Way easier.” she grinned, turning on the back of her heels as Kite left to tail the chasing men. Fire burst within her eyes as she focused her ethernano into her pupils, seeing the color of this world fading for the green, blue and red hues of the infrared spectrum. Sekigaisen, a simple spell that allowed her to see the body heat of people as if she was wearing a pair of infrared goggles; instead of goggles however her eyes had grown crimson, resembling those of a dragon. Kenna huffed as she moved forth into the smokescreen, trying to see if she could pick up the girl’s scent first. That idea was quickly thwarted by the strong scent of the smokescreen penetrating her nostrils, having her snort as she turned in on the first alley the smokescreen covered, following it until it came to an abrupt end at a giant gray wall. Kenna’s mouth turned into a soft, thin line as she stared up at the large walls beside her and turned to face them. Wings of fire burst from her back, and with a single beat propelled her into the air. Using the momentum of the force the ravenhaired maiden dispelled the wings and pushed herself off the nearest wall, swiftly clambering over the edge and making her way over the rooftops, her eyes keenly scanning the main street and any side streets were she to cross them on her way. Luck seemed to be on her side however, as she after a short while saw a little ball of red seemingly huddled against the wall below her. Slowing down to a calmer pace Kenna stopped near the edge of the alley and peered down, shifting her gaze to the main street to see if anyone was making any rash movements that could indicate them to be the people in white. After confirming them to not be as such, the slayer dispelled her eyesight and brought back her wings, spreading them and taking a step over the edge of the rooftop, using them to gently descend upon the girl that showed all signs of being in hiding. As she approached into a closer proximity of the girl, Kenna pressed her finger against her own lips as to gesture her to remain silent and landed before the girl in a crouched position, stretching out her hand towards the young girl. ”I know you have all the right reasons not to, but we have to get out of here. If you want to escape those men, come with me.” she said gently, nearly with a motherly tone in her voice, making sure that there was still enough space for her to leave if she wanted to.
_____________________________________________________________________________________

» Kaori: Underwater Adventure: Running Out of Air: C Rank: Solo - Private
» Linked Heart Running To Save Crocus From A Water Menace (Secondary Training Private Pein/Hikari)
» Running
» Running out of air
» Up And Running