The Princess of Fiore and the Eclipse Gate [Invite Only]

The Princess of Fiore and the Eclipse Gate [Invite Only] 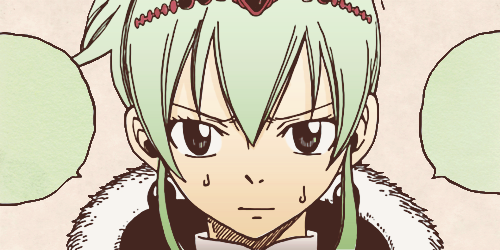 As a young woman walked through one of the thousands of halls of Mercurius, sunlight would beat into the hall one by one in beams as she passed many a window. The sound of steel followed her as she was flanked by 12 Garou Knights in anti-magic armor, followed by a battalion of Rose Knights.

As the sound of steel followed the buxom young woman with green hair, the camera would show her outfit. Draped in a close fitting red and gold, top and skirt, complete with a royal fur coat of deep red color with gold fur that nearly touched the floor and trailed behind her. On her head her usual crown of chain linked sapphires were shown.

"I wonder if he'll really come...." Hisui got a sweatdrop over her head as she continued to walk, up ahead.

The camera would then skip down the hallway into a waiting room as Heero stood surrounded by easily fifty Rose Knights.

"Don't you think this is a bit much...I mean I was invited." Heero rubbed the back of his head as the fifty armed men at close range didn't even speak from the other side of their armored helmets. "O....K."

"We're watching you wizard. Don't try any funny business in the palace." one of them spoke, his voice reverberating off of the sound of his armor giving him an odd echo. Heero would turn to the guy slightly, arms crossed, and give only a nod. "Why the princess would call upon your Guild of all wizards Guilds is beyond me...." the same knight spoke again as another knight elbowed him in the side to shut up.

As Hisui finally arrived, in a snap of steel all of the guards in the room snapped to attention including the one who'd been talking trash to Heero. As Heero smirked at him in a mocking way, he saw him fidget once.

"You...really came, the Master of Fairy Tail." Hisui would nod to all the guards in the room after a brief pause. As if controlled, they would march out one by one. Leaving the two alone. Except for the handmaidens of the princess. "I'm sorry to call for such an abrupt meeting like this....it's just...my father, he's become involved with...some kind of Dark Magic I'm sure of it...I didn't know who else to reach out too...."

As a worried expression passed over Heero's face, she would nod to him.

"Indeed, the Royal Family originally established the Magic Council to be responsible for all Magical Happenings within the land..so that the throne itself would not take all the blame...Ironic that my own Father would be tied up in something like that." Hisui would say as she looked to the left, gripping both hands in front of her nervously.

"What...exactly is he involved in?" Heero would say after a long pause. Taking all of this in.

Humans outnumbered wizards by the millions. If the King got involved in dark magic, the result would be catastrophic.

"He's...built a Gate that goes through time...from the Book of Zeref." as she said this, Heero would raise an eyebrow and then look surprised as he realized she was serious. "I know it's hard to believe...but I saw him...talk to himself, I followed he and his battalion of Garou Knights one night...the door is bigger than any building in Crocus even the palace.....when it opens the light that it lets out is like a sun....out of it came my father...he talked with his future self about something, I couldn't hear." she admitted as tears came into her eyes, she was obviously freaked out at seeing a double of her Dad that way.

"How do you know that this gate was designed by Zeref?" almost as if she'd predicted he'd ask this, she pulled a tattered page from her fur coat. Heero's eyes would narrow at the page; as some very intense dark magic was emitting from it. On the page itself were blueprints for what looked like a giant door, along with runic languages and mathematical calculations that were far beyond his understanding. Although he recognized a few symbols from his Dragon's teachings. "Is that.... an actual friggin page from the Book of Zeref? How did your Dad even get a hold of something like...."

She would shake her head as a long silence passed between the two of them.