Today he had just got back from Honsenka by bike and train. It was an exhausting trip, but he was to determined to experience new things on behalf of himself and his brother. He had the most tiresome countenance, and was planning to stay at an inn or something. Those were his plans, at least. But he was presented with foreign faces and land, his only source of navigation would be a (Handrawn) map. Little to no avail, he was lost despite the accurate directions. His first reaction was denial as he refused to believe he became lost so easily, with some sense of pride latched to that mindset apparently. He stopped and began to grind the tip of his shoes against the dirt between cobblestone pathway, before crossing paths with an old park. 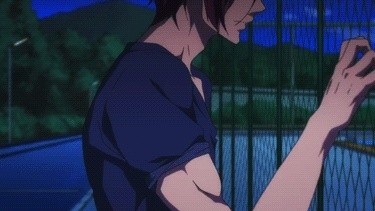 A few youthfuls were arrogantly playing on the chain swings and sliding down the small plastic slides. He observed them attentively, their voices so sinister to him, no mortal could comfort or describe what sorrow his countenance would express. He leaned closer to the fence, plucking his digits between the opening and clenching his shirt, to his chest, as bitter thoughts overflowed in his mind and his heart ached. He missed his parents, why was it so cold here?

Keiji grumbled, walking forth in the most divine agitation. He slipped his large hands into his loose pockets, only to find nothing to fill this empty space. He paused, stood in silence as the once divine agitation grew into a more passionate hatred for what had occurred. He had lost his wallet. He couldn't believe it.

He glared down at the ground and sighed, "Dammit. Guess it's no sake today." He groaned, covering his face with his hand in utter disappointment. But despite the moment of despair, he was caught off guard upon the impact of another. He instantly stumbled to the ground, tripping over his own feet. His bag cushioned his fall, but his rear remained sore. He winced upon the collision, raising himself from the ground and rubbing his head through his maroon hair. He clicked his tongue in irritation. "Ow, ow, ow..." He whispered.

Keiji stared with bland eyes. He was convinced that this man had an interesting story behind his appearance. Hence, he had the most divine, and pleasant temptation to proceed with further investigation. That, and... well, in aid for his current situation. Keiji rubbed the back of his head apologetically and pushed himself away from his face, grinning innocently.

"Sorry, sorry." He bowed his head respectively. He couldn't help but humor himself with some tease, his colors began to show. Or, to an extent. He only knew the guy for a minute or two. He smiled and ran his digits through the loose strands of his maroon mane playfully before removing the same digits and advancing them towards the man, offering an exchange of greetings and introductions. "Sorry, didn't see you coming. I'm Keiji Kato." He cracked an even bigger smile, desperately trying to discard of the anger of loss he had been subjected to most recently. He was actually rather excited. "I know we just met and all but do you have a place where I could crash? I sorta lost.. uh, my only 'hope'." He averted his gaze and optics when he was forced to bring up the mention of him being temporarily broke.

He knew he was being a bit pushy and confident but he couldn't just being homeless for a few days and not even know anyone, he at least wanted that comfort. And upon that very thought, he unequipped his luggage from his shoulders and placed it in between his legs with the straps facing him. "I know I have it here somewhe- Oh, here it is, open you hands." In the grasp of his fairly-toned palms, was a decently sized rock with an array of colors. It shined in the sunlight and reflected a series of colorful portraits. This was probably the most interesting thing he ground in the midst of exploration within recent times. It wasn't much of a trophy, or an offering, but he had tried to get on his good side before they actually did fight.
_____________________________________________________________________________________

Keiji retreated his rock back to his backpack and hunched it over his shoulders again. He smiled and stood up from the rough crust below and shook his head. "You seem quite the chipper guy, I'd be glad to give something like this for you." He raised his arms and brushed the loose strands of maroon hair out of his face and gazed towards the man with his crimson optics.

"Ibara, huh? Lovely name. You're just full of surprises." Keiji humored while listening to Ibara's words attentively, following him after his generous offering. He couldn't help but let his curiosity get the better of him. He remembered the mountains he hiked back around the Infinity Hydra guild hall, the things he saw. Beasts in their natural habitat, majestic waterfalls, lush and lonesome forests. He almost felt at peace, but no waterfalls could wash away the pain which he had bared for his entire childhood. He sighed and tried to keep up with him, almost forcing the smile at this point.

And in a matter of minutes, the arrived at an inn. He could proudly say that the joy and relief he felt when he came across this resort was so divine that it was the emotional pinnacle of this whole day. He felt his legs lose their balance and almost stumbled upon the sight.

"Never have I been so relieved to see an inn!" He announcement, much to his amusement, he voice was trembling. He really was excited. Besides! He had a new 'friend'. He still planned to dig deeper upon further encounters. He passionately grabbed Ibara's wrist and dragged him forwards, he himself, unaware of where he was heading.