In a New Light (Open/Social) 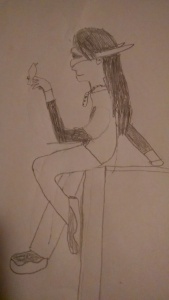 In a New Light (Open/Social)

Magnolia, a city that's rich with festivals, events, and just plain happiness to the core. Bustling with activity nearly everyday, Magnolia is by far a wondrous place to be at, to explore and discover many things. Today was a semi-cloudy day, those clouds making shapes in the sky and on lookers point them out to show what they see in them, be it outside or watching out a window. Many people were also taking a small walk through the large city, dressed up to counter the cold weather that was today. Except for one person.

A young man that was sitting on one of the branches of the many trees that populate the area, laying back on the trunk looking up at the sky. This young man was Kazuma Azure, his eyes were covered by a silver visor extending out behind his head, clothed in a long black sleeved shirt and white short sleeved jacket, white pants, silver and white shoes, and a golden necklace with an almost golden like wooden flute. He has long black hair, which was flowing gently to the side by the warm breeze of the large lake of Magnolia. He used to live in the forest with his family, though something happened and he has been looking for his missing family for a few months now. He has only just gotten to Magnolia, hoping to find a job to get food and just basically survive.

Though sitting in the tree, the sun shined brightly onto the visor that covered his eyes, causing a flash of light to reflect off of it. He grunted and covered his visor opening, sitting up to no longer look at the sun's rays. Stretching his arms back, he yawned and quickly looked around. It was hard to tell if he was asleep there, or he was just relaxing, as his eyes were covered. He jumped down from the tree and landed with slight dust spreading at his feet. He wobbled a bit, before moving onward, putting his hands into the pockets of his pants. The necklace he wore swung back and forth as he walked, glinting in the sun's light. The sidewalk he walked on was a twisting one, as he was on his way to a certain place that he had his mind set on when he got to the city. That place? Well, it's the wizard's guild known as Fairy Tail.

Why there? You may ask. It's the closest guild that Kazuma knows, and it's one that he may have the best chances of finding his family at. Though Fairy Tail is known for their destructive nature, it's also known for how loving they are and how much they care for one another. Or at least that's what he's heard, he doesn't know what to expect at this guild, but one thing is for certain... he's not going to give up to try and get in a guild. The road that he chose, is one of the shorter paths to take, but it's still a long ways to go as Fairy Tail sits at the heart of Magnolia.

Many people look at this young man in confusion, mainly due to his choice of wearing the visors. Many people question it, as most visors like that block vision out completely, yet he's moving around like he can see clearly. Though, he doesn't care for what people think it would seem, ignoring most of their comments, even when they confront him, he still continues on his way. Of course, he's just going by instinct to get to Fairy Tail, he doesn't know the city well enough to know where everything is. Infact, he hasn't been here in years, this place has seen some changes throughout the years for his sight.

Re: In a New Light (Open/Social)

Re: In a New Light (Open/Social)

As Kazuma was walking down the sidewalks, looking for the famous Guild building of Fairy Tail, he caught notice of the clouds that were up above in the sky. He almost got lost in them, seeing their shapes. Though he knew he had to get to the guild in order to actually get there, so he stepped up his pace looking forward and down, as if trying to make sure he was walking in a straight line. He went passed most of the people that walked by him, almost as if he had a third eye to see everything.

Though, that's certainly not the case as he was soon bumped into by a man who he didn't quite know, though he knew his name somehow, which was odd to say the least... has he met this person before? Memory is a bit fuzzy on that topic, perhaps it's best to ask, who knows? He might be from the Fairy tail guild. With a quick rub of his visor to make sure it didn't fall off, he sighed with a quick yawn before asking

"I don't know... have we met before? I don't exactly remember meeting someone like you... unless you're that one guy who gave me free food that one time because I was starving... no it couldn't be you, much different person... different gender. Are you from Fairy Tail..? I'm trying to find that place, hopefully to get some money so that I can eat something good again."

His eyes were covered by the silver visor that he wore, it was almost impossible to tell what he was thinking or even what kind of emotion he had, from the very least you could tell that he just recently woke up with the quick yawn and that he was slouching a tiny bit. In fact, you couldn't see his eyes at all through the visor, it's like it was pitch black to look through, like darkness just stood in the visor to block all view.