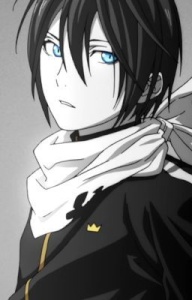 Change is impossible in this fog of ignorance

The sound of an explosion broke the mage from his thoughts. Screams instantly filled the air, as civilians ran away from the chaos and children cried. As the smoke cleared, Nagato could make out a group of wizards, all wearing red colored clothing with chains placed on their shirt and pants sleeves. The middle one, the one who broadcasted the most magical power of the group, wore a long blue coat with red runic markings on it. He had face length blue hair that swept around his face, with a deranged look and a constant toothy smile that just seemed to scream, "I'm insane." He looked out crackling at the mischief and chaos he had caused.

"Fools! Bow down before the powerful Exodius! You shall all be exterminated by my group of devilish and powerful beings. We shall bring hell onto earth. Cucucu..." Exodius yelled, raising his fist and crackling some more.

In an instant, a mage appeared in front of him, face covered by a hood. Exodius eyes shot out wide, before the crackling of lightning replaced the sounds of the civilians screaming. Nagato flowed black lightning from his body, as the AOE spell shocked the group of 'demons'. They were surprised at his arrival, creating zero time for a defense or counter to the lightning discharged from their mysterious foe.

As their bodies went stiff, Nagato back flipped away from his enemies. Pulling down his hood, he revealed to his opponents who would be stopping their attacks. "Nagato Namikaze, Rune Knight. I was hired to stop you guys from causing anymore trouble in this town. You have the right to remain silent. Anything you say can be-" He began to say, before a fist connected with his face. A knee to the stomach followed, causing blood to fly from Nagato's mouth. A pair of hands grabbed his head, but there was no head to grab! Confused, the dark wizard backed up, and Nagato's head came back into vision.

"What you never have saw a lightning wizard before?" He said comically, wiping the blood off the side of his mouth.

Change is impossible in this fog of ignorance

Charging magical energy in his hand, Exodius fired a fire ball at a group of civilians. He must have been focusing on something else however, as the spell flew wide right. Staring blankly at his enemy, Nagato laughed at the misfortune. Grumbling Exodius yelled, "What exactly is so funny you scum!"

Shrugging it off Nagato returned to the Cocky Fire Wizard in front of him. Reaching out, Nagato grabbed his neck and yanked towards him. Lifting the surprisingly light wizard up, Nagato slammed him into the ground. He threw four punches that connected at his face, causing blood to began to leek from his nose. While the Wizard had to have been fast, Nagato was faster. Lifting his right hand up, crackling began to be heard as black lightning covered the fist. Striking down, the lightning hand pierced the wizard below him in the stomach, and blood flew out of his mouth. Two of the wizard's companions ran toward Nagato, and his arms were grabbed. They lifted the mage up, and slammed him into the ground causing a painful groan to escape from his lips. The lifted him up again, looking to slam him down once more, but the mage had 'teleported' away. Confused, they looked around for their target. The mage was up on the roof above them. Pulling his left arm in front of him, Nagato pulled back his right hand. Releasing the magical power from his right hand, a black lightning arrow shot out, connecting with one of the cocky wizards. Jumping down from the roof, Nagato let out a scream as a large claymore materialized in his left hand. His right hand became succumbed in black lightning, as he descended at a fast speed toward the three cocky wizards. The lightning technique connected with the one previously hit with the arrow, damaging in the same spot as blood flew out of his mouth. Letting out another scream, the sword in his left hand went up and stabbed the same wizard. He fell limply to the ground, defeated. Swinging the sword down, Nagato stabbed the wizard he had first immobilized, defeating him also. The last of the three Cocky Wizards angrily stared at the man who defeated his companions.