Well, didn't you want me to visit some sort of friend or yours? I would certainly hate to disappoint. The boy responded to the little girl before placing his left palm on her head and ruffling her hair playfully, his eyes closing as he grin remained on his face. After that moment, he looked away again and continued to speak. Well how about this, we go see your friend, and I drop you off where that friend is, all right? The boy asked as he then looked over to Ignite, who was steering this ship it seemed. The She-Phoenix put out a thumbs up as the ship began to take a turn. Was she listening to their conversation? It would not matter if she did or she did not, but it would have been nice to know at least, so that way she did not hear about what Allison said about the water. Elyx finally thought about it again, and from there, he let out a scream for his life, as if being attacked by the water again. The only reason why he did not fear the water was because he was not thinking about it while he was above it, but now that he was... Dang it all! The boy exclaimed, making sure not to curse in front of the little girl, he did not need to damage her vocabulary just yet. And if it were damaged already... Whoops.

Weekdays: Busy from 7 to 3 EST
Allison

Allison beamed at the boy as her hair was ruffled, excitedly replying with a "Yes! They're all dying to meet you-- but they live in different places. And we can only see one, right? And so they all might be jealous if only one got to meet you, and jealousy might make people sad. So... I guess they'll all have to group together at some point and you can meet them then, all right?" The girl smiled cheerfully and then was just about to ask Elyx how he was feeling about the water again when the boy let out a loud exclamation. Blinking with wide, sapphire eyes, Allison tilted her head slightly to the left and asked brightly, "Is everything okay?" before giving the boy another hug as he said something to Ignite with her name in it. She probably should have been paying attention, but right now everything just looked so pretty... and peaceful... and Allison was becoming extremely sleepy.

Yawning and then blinking with watering eyes at Ignite, the red haired girl answered with another smile upon being prompted by the boy, "Ah... Ignite-san, I want to go wherever Elyx-san goes! You see, all of the girls live in different spots... they would be jealous... Elyx-san might die... Being hurt is bad..." Her voice slowly drifted off, and only snippets of the entire phrases were heard as Allison's eyes closed completely and she fell asleep. Typically the girl had enough energy to last the entire day, but she had been bouncing around for this entire mission-- and also channeling her inner thoughtfulness out so that she could help her partner face his fear of water. So, Allison had been nearly exhausted... and therefore, she fell unconscious the moment it was not necessary to converse any longer.
_____________________________________________________________________________________ 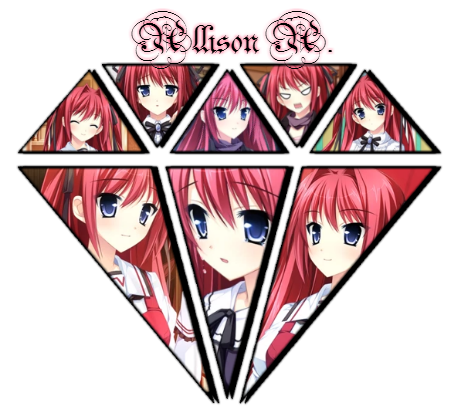 All together? Well, hmmmm, I guess we have enough time. Delta lives in Clover Town, how about we go over there? The boy asked before he pointed to Ignite. The She-Phoenix nodded her head, but then looked to Allison. The little girl said that she wanted to go whenever Elyx went, and the violinist found that to be adorable. If she went to any place that he has ever been like Ignite has, she might get seriously hurt. She used magic, and she may have been strong enough to his a Leviathan, but that does not mean that she would survive without his help. Her voice was beginning to trail off before he could explain anything of the sort. Allison was falling asleep, she never ceased to turn him over with her childish ways. It had been a long day. She was tired, it was only natural for her to be tired. The boy picked her up, one hand behind her back while the other behind her legs, then brought her to Ignites room on the upper deck, since his was still locked thanks to the stupid pet anyways. Once he brought her to the room, he laid her down onto the bed, smiling as he watched her breathe softly with such rhythm. Sleep well Allison, like I said, don't change. And if you do change, change for the better.

Weekdays: Busy from 7 to 3 EST
Allison

Allison slept peacefully, since she had learned to simply go along with everything and often ended up having to be relaxed in the most tense of situations.  This didn't happen to be one of them, but nonetheless she was able to stay in a position of light unconsciousness for a while before being disturbed by strange things happening around her.  Therefore, the girl stayed asleep for a few hours, her dreams sweet and involving food and kittens for the most part.  There was a strange part near the end which involved Elyx and her friends, in which Elyx ended up dying a terrible death... which was rather disappointing for Allison, given that she had been hoping he would be happy to be introduced to new people who were such ardent fans.  However, the red haired girl did concede that the death had been a very swift one, so she was alright with the outcome of her dream.

Elyx was being dragged out by the arm of his shirt being gripped upon. Once again, he had to commend her on her physical strength, to be able to bring him around wherever she desired, it was a little bit odd for him to even imagine possible. But now he did not have to imagine it, it was a reality. He decided to go along with it, she seemed to know what she was doing. Suddenly, Elyx noticed a group of woman that were shopping it seemed. Allison headed that way, still gripping his shirt with intensity as she then began to introduce him to them. Before she was able to finish her sentence however, they all ran up to him with excitement, barely giving him any room to breathe. His cheeks began to burn as a light shade of red was covering his cheeks. The boy was not used to having all of this attention, though most of it involved the fact that they were not letting him move too much. Er, help! Allison! Ignite, hey! The boy tried to call out, only for the voice to be cut off by the girls swarming around him. Sure, he liked the ladies, but this just made him feel embarrassed since this attention was new to him.

Ignite on the other side was standing by Allison, a smile on her face. My my, it looks like Elyx got caught up in a wonderful problem, surrounded by a group of women who adore him. Let's leave him be. The She-Phoenix said to Allison before patting her head. She wanted to treat the little girl to a walk, possibly shopping even. Come on, lets have a bit of fun of our own. We deserve it, the job is done. With that, she pulled out her wallet of newly acclaimed jewels.

Weekdays: Busy from 7 to 3 EST
Hikachu