Raven tapped her right foot impatiently on the ground below her as she stood leaning against a lamppost waiting for her teammate, Eien. They were going to investigate some nasty undercover slave works in Hargeon town. Apparently, women had been getting kidnapped lately and the rune knights suspect that they are getting turned into slaves. And so, they had declared a handsome sum for getting to the the bottom of the predicament and catching the men behind it. Raven had no problem getting to Hargeon in time with Kuroe but it seemed that Eien was running late.

She ignored the stares she received from the people around her, remembering that she was still a singer even though she had not conducted any concerts in a long time. Sighing, she pulled her black gatsby hat down, looking down at her attire to see a dark blue sweater with a black cardigan. Along with that, she had a pair of dark blue jeans along with black shoes. She looked okay, she thought, lifting her head up hoping to see Eien in front of her.

Eien had been lounging about the Saber-tooth guild hall doing nothing for almost a month now. She finaly had run out of jewel for food and was forced to do a job, she had joined a team a while back but they had not really done anything with her. But that didn't matter she needed jewel and one the the other members was willing to take her out on a job. She decided that she was going to be ready for anything so she decided to grow a pair of wings and extending her Fangs. She folded her new wings and snapped her mouth a little, being a shipshape was a great. Eien cracked her neck as she walked to the exit, her dress shifted as she walked. She knew that people felt she was under-dressed but she really liked it, regardless of the fact that it only just barely kept her more secret parts covered. She walked out, her hips swaying in a sensual manor, she was a goddess of Chaos and sexuality cause a lot of chaos. She stopped for a second adjusting her dress as she changed sizes, she would take the from for a child for this job, it could be useful. Her hair grew longer and changed to blonde, her eyes turned to sky blue. Eien felt good about her disguise but stopped real quick.

"You need to change." she said quietly, As she did her dress to a different form, one the matched the dresses she had seen the angels in her court wearing. Pure white with gold highlights. She hope this would pass as she was a angel, she had found them naive for the most part and perhaps she could use this to her advantage.

Eien smiled as she stepped out of the guild hall looking for her teammate. didn't see her at all, so she flew to Hargeon. she had seen her teammate before and so picking her out was not hard. Eien landed near by and ran over "Hey... OH my voice!" she changed her voice to something more sweet and full of bliss. "Ok hows this." her voice was angelic now, something that you would expect a angels voice to be. "I thought this would help us in a way. Care to make some money for a good catch?" she grinned as she spoke. 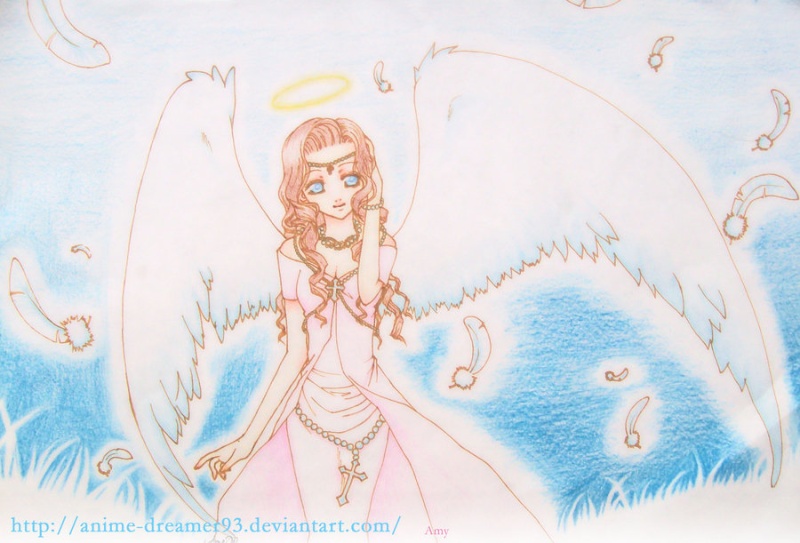 Now that the silver haired girl thought about it, Eien was a strange shapeshifter. Sometimes, she had to be honest that it spooked her out a bit and sometimes she was awed by it. However, she wished she had the ability to actually figure out what the girl was honestly thinking. There were times she had walked by and not recognize her. In fact, if it wasn’t for the fact that Raven learned to recognize even a small character of Eien including her voice and the way she moves, she would have never been able to tell that the young “angel” running towards her was Eien.

Raven’s ruby eyes visibly twitched as she looked over at the sickeningly sweet looking girl who looked like she literally jumped out of some stupid fairy tail about angels and princesses. She really wished to have a mind reading ability now.

‘What on earth is she thinking?’ Raven thought, resting her face on her open palm with a groan. “I’m supposed to sell you now? You know what? I should really just sell you and make some money,” Raven said, pushing herself away from the lamppost she was leaning against. “At least you got the angel character right,” Raven spoke again after a few minutes of staring up and down at the shapeshifter.

Eien watched Raven as she looked her up and down, "See something you like love?" she stuck a slight pose as she speaks. Raven then starts on talk, Eien listens paying attention to Raven words. Eien smiles happily as Raven had already figured out her plan.

Eien runs up and hugs Raven. "Hello mistress, how are you today." she was acting like the new angels the stayed with her court, well before their purpose was changed to the purpose of Chaos. Something Eien took great pleasure in doing, turning a angel to chaos. "What are we going to do today mistress? Shall we help the needy? or perhaps go shopping." she let raven go and stepped back, she took Ravens hand. "Lets have fun again today," Eien gave her all to the act of innocent, she wanted this job to be easy. "Lets go!" she pulled raven on like a child would her mother, "There are people we need to help."

Torture….This was pure torture. What on earth were they doing playing dress up while they should be kicking some bad slavers’ ass. She stared at Eien as she came out in different dresses and protested when she was pushed to do the same. Forced into the dressing room with a blue polka dotted dress, Raven leaned back against the mirror and closed her eyes, pinching the bridge of her nose.

Annoying...Annoying...EIEN WAS BEING ANNOYING! Raven beat her fist against the mirror several times as she sighed loudly. Five minutes later, she was out and twirling in front of Eien with her dress. And as the fashion show continued, Raven sat down with her original outfit on a sofa drinking apple juice while watching her “pet” go around trying more dresses. Raven noticed it. She noticed the change in Eien’s expression when she came across a particular dress. Cocking her head to the side, Raven whistled slowly.

Eien caught sight of the man out of the corner of her eyes, it had worked. Eien hid her smile, what would raven do now? Would she just up and sell Eien now, or would she wait for them to leave first. she sat wondering the store so Raven could work something else, she had to seem like a airhead. Eien hummed to herself as she skipped around the shop. She extended her wings a little and spun knocking rack over.

"OH no!" she folded her wings quickly as one of the service reps came running over.

"AW look at the mess you made!" he exclaimed.

"I-i-I'm sorry. i didn't mean too." Eien made herself look ashamed, the man looked at her and gasped.

"Please forgive me, i did not mean to do that." Eien played off on the Innocence. "How can i make it up to you, Kind sir." The man looked up at her and smile.

"Don't worry about it. It happens." She could tell the man had let it go, so she walked away, bowing before she did.

Raven sighed deeply with her face in her palms as she saw Eien knock a rack of cloths over, sending colorful fabrics flying all over the shop. That girl was taking this naive angel act way too far. But, It seemed the man next to her liked it though. She heard him chuckle and whisper interesting under his breath. ‘At least someone finds this amusing,’ Raven fumed in her head, her eyes twitching as she saw Eien act all innocent towards the service rep. If she looked closely, she could see the red glow on his face and the pink sparkles behind him as he looked at Eien. “Idiot” Raven muttered, making the guy next to her look at her with a raised eyebrow.

When Eien came skipping towards her, Raven slowly raised her gaze to look at her with a ‘You’re causing way too much trouble’ look. The metal chains on her pants made a clang sound when she stood up and went close to Eien. She patted her head and then ruffled her hair, forcing a charming smile at the fake cluless angel. “You should be careful, Aries.” The strength of her hand on Eien’s head increasing a little. “You are giving trouble to a lot of people,” Raven warned like a sweet owner before turning to look at the guy gawking at them from a far. Wait...what did he think they were doing?

Eien watched as Raven talked with her shady friend, keeping the innocent look on her face. "OH OH! are we going on a trip." Eien jumped up and down a little, trying to look excited. "I do so hope that i can come with!" she lunged forward and hugged raven. "Your taking me right!" She was enjoying this facade, to the point she might use this form more often. Perhaps not with the act but definitely the form, she unfurled her wings in mock excitement.

She looked at the man, "are we having a feast? or a grand ball like the humans of royalty?" She made herself jitter with excitement, "Oh i do love seeing new people, When are we going?"

She looked back at the dress she wanted and sighed slightly, She really did want it. Perhaps once she got paid for this job she would come back. Eien turned around and took raven hand waiting for her to lead the way. Her plan had worked as she wanted, but she was unsure now. It brought memory's of her past to the surface. She was here in Earthland to find her sister, something she had not been doing.

The man gave Eien a wide smirk as Raven slowly turned her head to look at Eien with a fake smile, her eyes showing the clear irritation she had for the shapeshifter. “Yes. We are going to a great place, Aries. You’ll love it,” She told her as the man beside her chuckled, probably thinking of everything they could do to her. However, if he hadn’t been staring intensely at Eien, he would have noticed the angry look Raven was giving him with her own mind plotting for ways to make him regret messing with two Sabertooth members.

Placing a hand on his shoulder, Raven pushed him behind, telling him silently to leave them. With a nod, he did just that, leaving Eien and Raven alone once again. “What an idiot,” Raven spoke more to herself as she grabbed Eien’s hand and went towards the dress Eien was looking at. “I didn’t know you liked these things,” Raven muttered, her eyes going all over the dress. Motioning for an attendant to come, Raven pointed at the dress and enquired for the price. It was quite, expensive, she agreed in her head as she pushed the dress towards the attendant.