☽ Archangels of the Sephiroth ☾
logistics
☽ Job Title: Archangels of the Sephiroth ☾
☽ Job Rank: Guildscale ☾
☽ Job Location: Ancient Ruins ☾
criteria
☽ Word Count: Word Counts for Guild Scale jobs are based on participants. Players participating in a Guild Scale job have the choice between completing the solo word count of a job of any rank lower than their own rank, a job of their own rank, or one rank above their own rank, and will be rewarded according to the word count of the rank of job chosen. The word count is then added into a pool, which is comprised of the combined word count set by the individual participants as their goal upon sign up and then multiplied by 0.75x (e.g. 5 players sign up for a guild scale, 2 of which choose C rank word count, which is 1,500 words, another 2 choose B rank word count, which is 3,500 words, and 1 more chooses S rank word count, which is 8,000 words. These word counts are then added together, resulting in 18,000 words total. This total is then multiplied by 0.75x, in this case, 18,000 x 0.75 = 13,500 Words). This pool is set as the total group word count the participants of the thread must reach in order to successfully complete the Guild Scale job before it can be turned in. Participants will receive EXP according to the rank of job they set for themselves upon sign-up for the Guild Scale job. ☾
☽ Player Requirements: Players must be members of Luminous Rose & there must be five guild members present in the thread.

information
☽ Following a detrimental loss of ethereal artifacts from a historic museum of magic in Rose Garden, the upper management of the exhibit has reached out to the guild of roses, Luminous Rose, in order to gain assistance in the recovery of their magical statues- and the deliverance of a wretched secret, which would be requested to remain confidential between the two parties. Though existing within the realm of Earthland for hundreds of years, these magical statues were magically dedicated to an ancient angelic entity known as The Sephiroth prior to their arrival within this world and were said to have become imbued in its ancient powers. A fallen angel rumored to possess the ability to manifest in the form of a holy god or goddess within another dimension than our own, it has been centuries since it has been said to have cascaded down from the heavens above to induce terror and madness in the people of the other world due to having succumbed to a great hero.. at least, that is what was wrote in legend over on the other side. The statues, venerated to show divine regard to the fallen angel's power of manifestation and "deliverance of justice" in the form of betrayal, once resided in a temple cloaked in darkness at the feet of the Sephiroth- they represented the fallen angel's victories against those that it was once like, the holy. Cloaked in the energy of evil with the face of holiness and grandeur, upon witnessing the death of the fallen angel the energy combusted, causing all of the statues to slip into the interdimensional loop, falling into the hands of the arts to be dedicated to the beauty that resided within their magical makeup instead of bearing disrespect from a fallen angel. ☾

☽ While remaining intact for a few decades at the exhibit of magical energy and art, La Mage's Maison, it was documented upon lacrima-based tech that a group of mages appearing to bear the accessories and appearance-quirks of angels and seraphim levitated and seized all of the statues of old gods, alongside the fallen angel Sephiroth's, utilizing their magic to fracture their bases from the ground and ascend with them into the moonlight. Despite their motives being unknown, it was said within magical prophecy both within ancient literature and testimonies of advanced researchers that it was fate that a cult of angels would ascend to revive who they viewed as a god- the Sephiroth, the destroyer of sanity and trust. Having reached out to a few select groups of mages in secrecy, including Luminous Rose, it was informed to the higher ranking members of power the situation at hand alongside the possibility of gaining a great sum of jewels upon finding success in seizing back the stolen goods. Working with a set of independent detectives hired by the descendants of the original owners of the museum set out to find the location of the "mage cult", and while success was deemed to be unlikely, a sighting of them, or likeminded people, occurred upon the basin of the Ancient Ruins to the west of Clover Town. They seemed to be accompanied by a large magical creature in chains shackled in a giant golden bubble- their motives are still unknown, but all of the arrows point to their hideout being in the depths of the ruins. Having accepted the challenge, the Guildmistress of Roses has requested a meeting with anyone willing to dedicate themselves to a difficult job, determined to find success in the finding and retrieval of the statues. ☾

☽ The meeting will occur the night of September 29th at the café that sits upon the walls of Clover Town- each member of Luminous Rose will have received a personal letter addressed to them requesting assistance, signed by Desirée Blooms and La Mage Maison. While the context of the letter would remain vague, each envelope will contain a set of coordinates for the meeting place alongside a set of polaroids depicting the angels transporting the statues and the shackled beast. Despite their appearances appearing quite clear within the skies, each suspect of the cult remains a mystery. Names, magical powers, none of that- but their smiles appeared to glisten with evil just like their angel wings, tormenting the pink mythical creature in their endeavors and scheme. Each attending guild member will be assigned to raid the ancient ruins in a group, one group designated to retrieving the statues with magical power and the other two to operate in the offensive from two separate points. Member's placements will be determined by skill, special assignment, personal input, and effective evaluation at the café. ☾
☽ Targets ☾ Empyrean Swarm: Almost forming a shield of holy magical energy, the Empyrean Swarm takes the form of what appears to be a clockwise turning group of a million spirit-like angels- drawn to the ancient ruins to protect the cult, they do not deal damage and cease to exist upon coming in contact with magical power, though will be difficult to fully clear out while keeping them silent. 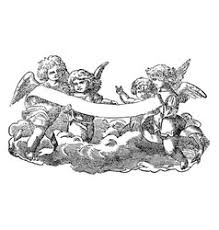 Cherubim x30: Taking the form of small, baby-like angels, these creatures are dedicated to the fallen angels and guard the ancient ruins from intruders that wish to face off against their cult. Utilizing magic of holy light and wielding various weapons, each cherub takes two hits of c rank damage to take down and deal c rank magic damage with long-ranged ethereal attacks. Once alerted of enemy presence they tend to swarm together while some sneak off to alert stronger enemies. ???: Seemingly acting as a commander of the cherubim, this enemy will rain from the sky with a bow and arrow infused with holy light that deals B rank damage- he can also utilize a stronger form of cherubim magic from long range, which also deals B rank damage. He takes four hits of b rank damage to be defeated. ???: Utilizing holy magic of angelic summoning using the form of coins and long-ranged light magic, this target is seen to appear quite kind and non-hostile until provoked- she deals b rank spell damage with attacks from both herself and her summons, and takes five hits of b rank damage to defeat. Upon being defeated, she will use the remainder of the magic in her ethernano to summon a rain of angels mentioned in the strong category. The Sephiroth - Stage I: