Stranger In A Strange Land [Open] 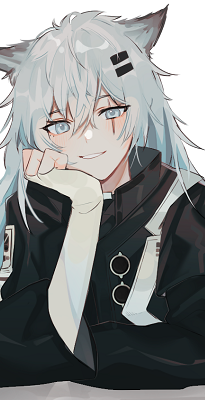 Stranger In A Strange Land [Open]

With a deep breath and blinking eye lids the unusual guest aboard the 'Merry Mary' opened her eyes still a little sleep drunk. Her body situated aboard the ship and next to the railing, inside large bunched up ropes slowly dragged itself up until she sat on the side of set rope circle. She rubbed her eyes and looked around, long having noticed the sailors next to her but not paying them much attention. Both said sailors had been worried the fox girl had somehow died lieing here as they'd not managed to wake her up. She got up after a moment and waved her left hand at the both of them and with a yawn said, "Sorry, sorry~" She didn't really care that she'd disrupted their work or whatever and instead look over the railing a few meters from where she'd slept. The canine ears atop her head twitched as she looked over the harbor infront of her. Over her time away from the sect she'd especially been at quite a few harbors already and wasn't surprised by the way things were busy and loud anymore but couldn't help feel bothered by it. As they had anchored already Luka quietly went to her cabin and got her belongings together, not speaking to anyone and once more stepped onto the deck, four swords now at her waist and a long black coat covering most of her features head down. Only her wolf's tail was peaking out through the back. "Thanks for picking me up, old man." , she said stepping down the plan that connected the ship to harbour. She had spoken to the ships captain who was kind enough to take her with them for a small fee and was now sitting aboard the ship and smoking. The girl had shown herself to be completely different form his expectations, not shying away from physical work and knowing how to help aboard a ship surprisingly well, which was due to her constant travels by sea.

On land, Luka twisted her head and made her neck pop while she stretched and in her mind was already scanning the surroundings for the next best food place she could find. After spending weeks with mostly fish and salty food, a nice, juicy steak sounded just about right now and would scratch that desire for meat. Aside from that she'd porbably also have to rent a room to the edge of town where she'd be able to meditate to clear her mind and prepare herself for travels across this continent. Making her way down the main road leading away from the harbor, she occasionally stopped by stalls and shops to look if anything interesting was on sale but never bought or touched anything as she did not have the intentions to. In fact her funds were already quite low, so even if she'd wanted, she couldn't really afford anything as she otherwise was also only carrying necessities with her. Although she seemed bored and walked with a desinterested expression on her face, her clothing and body language made her seem a bit like a punky mercenary.
Majora Magica

For the first three hours after his arrival at Hargeon Town all Asher did was stare at the horizon in awe. Sure, he wandered a bit and tried to see if it looks different from different angles (it did not), but mostly it was to look at the sea for the first time in his life. It was vast, powerful, and beautiful, just as his teacher had told him. Despite it being against his fiery nature, the water demon had put effort into making Asher appreciate all of the good things about water before he could truly become the ocean Demon Slayer. And here he was, seeing the core of his element and the home of his teacher for the first time.

In a good mood, he decided to wander up to the shore to see if he could catch fish like his teacher once taught him to. But it was too near the town and too busy for fish to be there. Shrugging, Asher simply hopped into the water, to the mild astonishment to those around him since he was in full armour. It didn’t really matter though since Asher could breathe underwater. He greatly enjoyed his time in the ocean, fought off some monsters with his grandfather’s sword, and managed to catch a few big fish as well. Casually walking up to the beach again, shaking the saltwater out of his messy hair, Asher wandered over to one of the beach fire pits, putting the sword down next to him as he settled in. Gathering some dry driftwood summoned a handful of fire to light it, drank some water because he was always told to do that after summoning fire, and started to cook the fish on a stick.

After a while, the grille fish started to smell very yummy indeed. Grinning the slayer reached for one, and realized he had caught too much fish. Since he was the Ocean Demon Slayer the ocean water he consumed before pretty much filled him up. This fish was more for taste and nostalgia’s sake. Looking at the skewers in front of him Asher frowned, then came up with a great idea. Maybe this was an opportunity to make new friends!

Asher took a moment to look around and happened to make eye contact with someone. Grinning even bigger he gave that person a big wave. “Hi there! Wanna have some fish with me? I made too many!” He says, gesturing to the skewers, his smile morphing to be more friendly than a maniac grin. 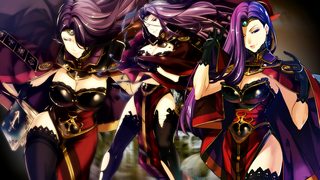 With her ears sometimes suconsciously moving towards a direction that a conversation took place at she made her made across the street and soon arrived at a less busy area as she left the harbour behind and approached a more beach like seafront. Here there was mostly tourists and locals that minded their own business and made the atmosphere more bearable then before, although there were groups here that contributed their own share of noise. It didn't take long though before a familiar scent of of grilled fish wafted through the air and over to her together with the fragrance of burning wood. Her feet took her closer to the scent and she soon saw a man sitting at the beach, seemingly grilling fish on an open fire all by himself. He was definitel a weirdo the way he was acting, but the words he shouted to a passerby caught her attention. Was he offering free food to that person? They shrugged and waved the guy's offer off, but in that time Luka had already made her way down to the beach and was sitting at the fire with a fish skewer in hands and took a big bite out of one of them without paying any attention to the original host of this little feast.

Although she'd had fish the past few days already and had been looking forward to something with a bit more substance in meat, but a meal for free automatically made any food better. It didn't need much of a mention, but the way Luka was eating didn't befit the image of a lady, more a wild animal that had been starved for days. Some fish was sticking to her cheeks, she herself sitting crosslegged and slightly hunched over her food. Proper etiquette had been drilled into her since childhood, but who really cared about those out in the world? From what she'd seen only pretentious people did. So, after a few bites in she swallowed and licked over her lower lip and said, "Yo big brother, you don't look like you've good butter or spices on you, do you? Not that she was a grand cook or fish connoiseur, but bland fish lacked that kick. She already gave him a disappointed look, even though she'd been the one to sneak up from behind him and take food as she liked.
_____________________________________________________________________________________
X x X
Majora Magica

Pouting a bit at the admittedly polite refusal from the stranger to called out to, Asher went back to chowing on his grilled fish, noming into it with gusto. Then almost choked as a person seemed to appear from literally out of nowhere to grab a skewer and start eating with even more exuberance than Asher did. After getting over his minor choking problem, Asher was overjoyed. Surveying the boy he found a ratty young thing with long messy white hair like his, white eyes (blind? He didn’t think so…) with a scar over one of them, and cute white cat ears and a tail. Taking a whiff with his enhanced slayer sense Asher could immediately smell the ocean air and fish on him, telling the Sabertooth mage absolutely nothing since they were currently at the ocean. Oh, another scent! It smelled like the oil Asher used to treat his sword! Maybe this guy was also a swordsman?

Before Asher could voice the thousands of questions running through his brain the other boy spoke up. Butter? Spices? He automatically hunched his shoulders at the disappointed look, not even thinking about the fact this cat guy was demanding something from him despite eating Asher’s food. Wracking his mind Asher had to concur, no he did not have anything to flavour the fish. He could survive only on liquids and tended to do so, buying food or cooking plain like he was doing now whenever he wanted regular food. “Er, no sorry. How about some juice?” He said, scratching a cheek sheepishly and holding a juice box in one hand for the other to grab if they wanted. Wait, salt as a seasoning, right? And the ocean tasted grossly salty (something he had found how an hour before. Ew), so it must have some salt in it, right? Perking up he said “How about some ocean salt? Can we use that? Is that where salt comes from?” Being a landlubber and a bit of a moron, Asher had no idea how to actually gather ‘ocean salt’, but got up anyway to run to the ocean in excitement to gather it.