Exist with me. We'd do so beautifully. 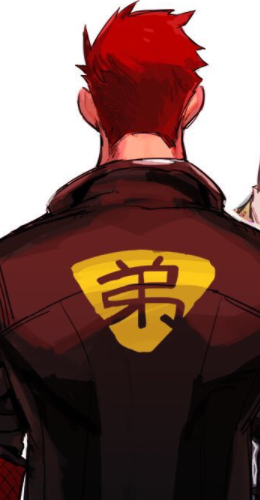 Murder was nothing uncommon in Fiore. People died every day, and it was just that a lot of them died at the hands of others more often than not. Needless violence ran rampant throughout the country, and it didn't help that there were entire guilds dedicated to their vision of terrorism. Violent crimes have probably existed since the very infancy of civilization, but law enforcement was something that transformed throughout millennia. A thousand years ago, the law might have looked different, but now, the face of the law and order was the Rune Knights. Anyone could recognize those inky-black uniforms—men, women, and others donning their Rune Knight insignias. They were a group of powerful sorcerers, who might not have always been serious people, but took their jobs seriously. Or at least Major General Suzuki did.

Chiyuki—or Doppo, as many called him—wasn't always a serious person, and still wasn't. There was a time where his only goal was to secure a stable source of income, sit down at parks, read books, and eat. It was a life without purpose, just leisure. He was unmotivated, lazy, and while struggling to make long-lasting friends, he didn't seek them out either. He epitomized existence. But ever since that attack on Era quite some time ago, he had been pushed into the ranks of the Rune Knights, and while it wasn't befitting to him at first, he grew into it well. He wasn't as remarkable as some of his colleagues and didn't have a name for himself outside of his work. But what did that matter? He was strong and reliable, and although it was hard to tell, he was passionate about his job and worked hard to make his people safe. No one deserved to live in terror. No one deserved to die.

There was a murder in one of the main streets of Magnolia, and it ended up being quite the scene, seeing as it was apparently a stabbing in broad daylight. As a result, there ended up being many witnesses, and after privately questioning several of the bystanders for information, the description that Combat Corps had to work with was an average-sized woman with black hair and white skin. No one seemed to get a clear look at any of her other features, seeing as it all happened so quickly. But because another physical description was so vague, Doppo had C.C. spread out throughout the town in search of suspects. Black hair wasn't so common, so there was only a handful of women they found. Doppo, on the other hand, had his eye on a woman in a plaza.

He was normally quite the lean and lanky fellow, with messy, unkempt hair. But when he needed physical strength or endurance, he utilized his other magic in order to get that. As a result, he was much larger and "masculine", the increased hormones resulting in immense muscle growth, as was as a chin-curtain beard. His height didn't change—still a consistent five feet and ten or eleven inches, but it could be intimidating nonetheless. His strength, with or without this appearance, was nothing to scoff at.

Observing the public in the corner of the plaza, Doppo leaned against a wall with lazy but attentive blue eyes, when suddenly, someone special came into view. The C.C. task force in Magnolia was given a list of potential suspects, and on them was one girl named Lethe. No one knew what her last name was, but she did fit the description. She was a bit too tall for the girl they were looking for, but it didn't hurt to at least bring her in for questioning. It wasn't like she was getting arrested. With that in mind, the Major General left his position in the corner of the plaza and approached her from behind.

"Excuse me," Doppo grabbed her shoulder firmly, hoping to stop her in her tracks, "is your name Lethe?"